While clearly a  selfie-inducing natural celebrity in ways that Stephen Harper can only imagine, our new PM has taken pains to distance himself even further from his predecessor in the more compelling area of actual policy, telling the World Economic Forum in D 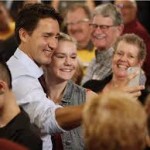 avos Switzerland, “my predecessor wanted you to know Canada for its resources. I want you to know Canadians for our resourcefulness.” This is a nice piece of word play–a cleverly crafted sound-bite. Well done Liberal speech writers. So what exactly does this mean?

It appears to mean that, in stark contrast to his father, Trudeau-the-younger no longer regards Canada’s natural resources as the most vital part of its economy.  Unlike his father, whose National Energy Policy put indigenizing  Canada’s oil industry at the very heart of a larger nationalist vision, Justin seems inclined to regard natural resources and the ecological price inextricably linked to their development as passé . But this is more than just a son’s a coming-of-age defiance of his father. From Confederation onward, Canadian’s of every political persuasion have thought of their economy almost exclusively in terms of oil, logs, potash, iron-ore, coal, natural gas, uranium, and so forth. There have always been  vigorous and sectarian debates about ownership and control of these resources, but nobody ever really disputed their seemingly eternal connection to Canada’s prosperity, even its nationhood.

As Peter Evans (1997) suggests (in “The Eclipse of the State? Reflections on Stateness in the Era of Globalization,” World Politics, 50) the future prospects of the territorially-grounded, extractive state remain unclear, even in an era of unprecedented globalization. He also reminds us that the realities of world politics are never entirely divorced from politics, and that the ideological pendulum now swinging away from the notion that states can be effective instruments for the achievement of collective goals may one day swing in the opposite direction.

It’s only right that a young leader endorse the resourcefulness of a young nation, and express confidence in the intellectual power of his generation. Knowledge is a growing and vital part of a wider sharing-economy, and as FDI diversifies Canadians ought not to rest unduly on their somewhat unflattering traditional role as one of the world’s “hewers of wood, and drawers of water.” (The origins of this phrase, after all, resides in the Bible’s depiction of a curse pronounced against the descendants of Canaan!) But it would be wise to remember that natural resource wealth has always been a core part of Canada’s economy regardless of party platforms and, that if Canada is losing interest in its resources, others are not. China’s state-owned companies, for example, are in the midst of an investment spree designed to secure mines, cropland, and raw materials, something that a weak Canadian dollar will surely help to facilitate. For now at least, there is far more interest in our uranium than our cranium (e.g. see http://www.mining.com/china-eyes-canadian-uranium-miners-report/).

While few academic fields are better than International Relations (IR) at inspiring ideas of fundamental change, resistance to fundamental change remains one of IR’s most consistent and remarked upon features. This paradox appears to underly Ethan Kapstein’s remark that Realism “continues to define the discipline” even as it remains “deeply and perhaps fatally flawed.” The great strength of Realism is its ability to rise above the morass of allegedly new actors and issues that populate discourse about world politics, something accomplished by its insistence on state centred analyses, and highly efficient reduction of all actual or potential political action to concerns about power and national interest. But this is also the Achilles heel of Realism, an approach easily reduced to caricature or dismissed as “an anti-political apology for brute force and cynicism” (Rob Walker). Realism, while a seemingly natural view can, even when it seems most relevant, induce feelings of shame in its advocates.

But to what extent does Realism remain “a cornerstone of International Relations theory”? The evidence in this regard is mixed, and a major survey of the relationship between pedagogy, scholarship, and international policy finds that only 16% of American political scientists (and 16% globally) self-identify as Realists, as compared to 20% constructivist, 20% liberal, and 26% non-paradigmatic. This stands in contrast to the survey’s identification of a high literary output devoted to Realism, suggesting that some political scientists may be publicly embarrassed by their Realism, but privately committed to its salience.

But to what extent have academic Realists shied away from endorsing political figures and policies that, in theory, are consistent with a Realist worldview, and is such reluctance a function of the embarrassing reality that such postures and politicians are likely to package politically realist pronouncements on foreign policy with politically embarrassing, socially questionable, and controversial pronouncements in general? Two almost prototypical examples of this phenomenon are Vladimir Putin and Donald Trump. Realists (e.g. John Mearsheimer) have embraced Putin as a Realist despite his controversial leadership. Trump, however, is another matter who, despite a remarkable rise to political prominence, ability to capture the attention of an American public increasingly worried about national security, and emergence as the only presidential candidate in recent memory to articulate a consistently Realist foreign policy, has yet to be taken seriously by academic Realists.

Yet it is possible to identify an increasingly and specifically Realist content in Trump’s foreign policy pronouncements, albeit  packaged with “massive unfavorables” (Drezner) that mean academic Realists will likely be too embarrassed to endorse, or openly help to shape, a feasible Trumpian Realist foreign policy any time soon. The contrast with Putin is useful, and suggests that it is easier for American Realists to embrace or identify with non-American practitioners of their craft, opening the door to exploration of the distinction between what is politically viable, and what is politically correct.