Unlike many projects of this nature, the BC Big Tree Registry didn’t begin with a committee or organization, it began with one remarkable individual. Randy Stoltman compiled his first list of big trees in 1980 at the age of 18. An adventurous kid that loved the outdoors, Randy grew up playing in the forests on the north shore of Vancouver. His first list was a record of all the big trees in Stanley Park (the 1001 acre public park that borders downtown Vancouver) which he gave to the Vancouver Parks board. From then on Randy dedicated himself to conservation and public outreach, volunteering with the Western Canada Wilderness Committee to prevent old growth logging and building trails and signage to allow for people to get out into the wild and connect with nature. 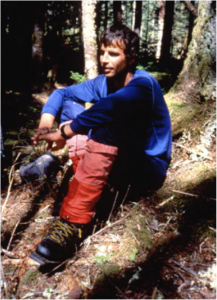 The big tree godfather himself. 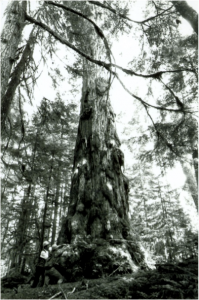 One of the registry monsters.

From its humble beginnings in the hands of a nature-loving 18 year old, the formal registry was established in 1986 by the B.C. Forestry Association, which became Forest Education B.C. and most recently FORED BC. Sadly, in May 1994, Randy lost his life while ski touring in the Kitilope area. After his death, FORED BC stopped maintaining the registry and much of the original files, maps, and photographs went missing. Fortunately, shortly before he passed, Randy copied most of the registry records into a report for the B.C. Conservation Data Centre (CDC). After swapping hands a couple more times, in the fall of 2010 the BC Big Tree Registry found its home in the Faculty of Forestry at the University of British Columbia.