Summer is wrapping up and the Aitken lab is getting back to classes and lab meetings and all the regular routine of fall term. We spent our summer watering trees in the greenhouse, presenting at conferences, trekking around the field, and taking quiet vacations. Where ever we went, we found trees that delighted and soothed us. Here are a few of our favourites –

While wandering around Eves Provincial Park near Duncan, I came across the biggest bigleaf maple I’ve ever seen. The sign claimed it was the biggest maple in all of Canada. I’m not sure about that, but it was very impressive. When trying to verify the claim, I found there are 4 giant bigleaf maples in Stanley Park – practically in my backyard. Guess I know what I’m going to be looking for on my Stanley Park walks this fall! One of the things I love about bigleaf maple are how many epiphytes they support – their bark is just covered with mosses, lichens, liverworts, and ferns. 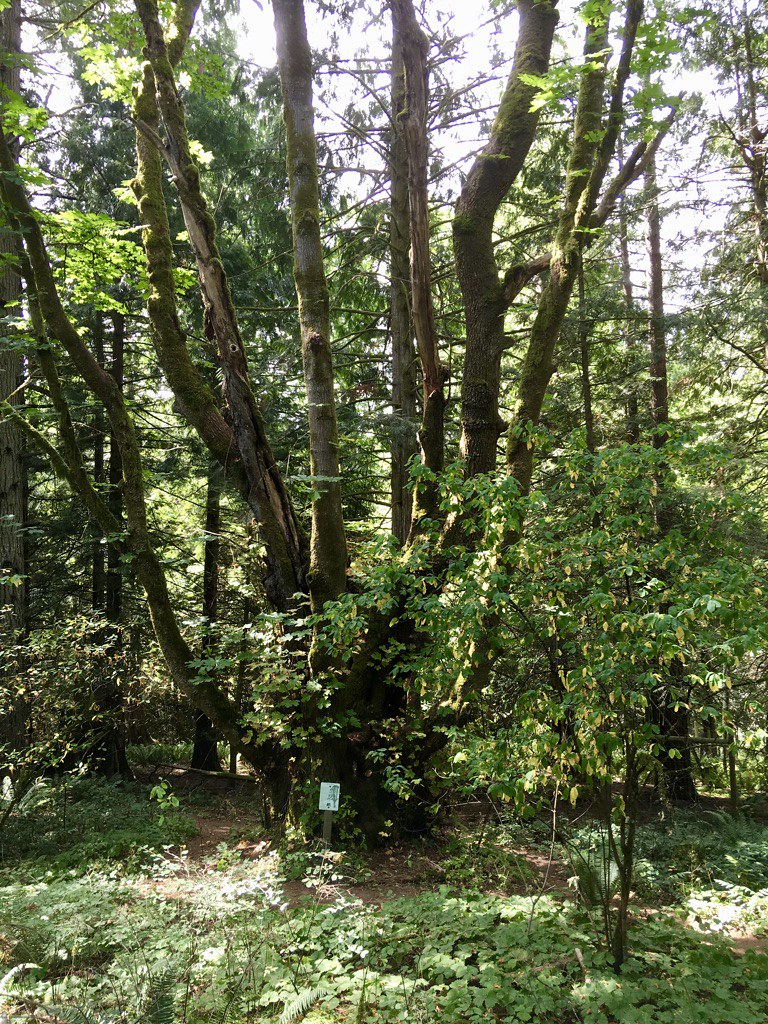 This is a Great Basin bristlecone pine tree (Pinus longaeva) from the protected Ancient Bristlecone Pine Forest in the Inyo National Forest of California. The trees in this forest are some of the oldest on the planet; the oldest living tree is estimated to be over 5,000 years old. They achieve these great ages by growing extremely slowly; an inch of diameter growth can take up to 100 years. Their needles can persist for over 40 years (the longest lasting of any plant). As they age, portions of cambium die, leaving only narrow strips of active vascular tissue and bark, leading to their characteristically gnarled growth form. 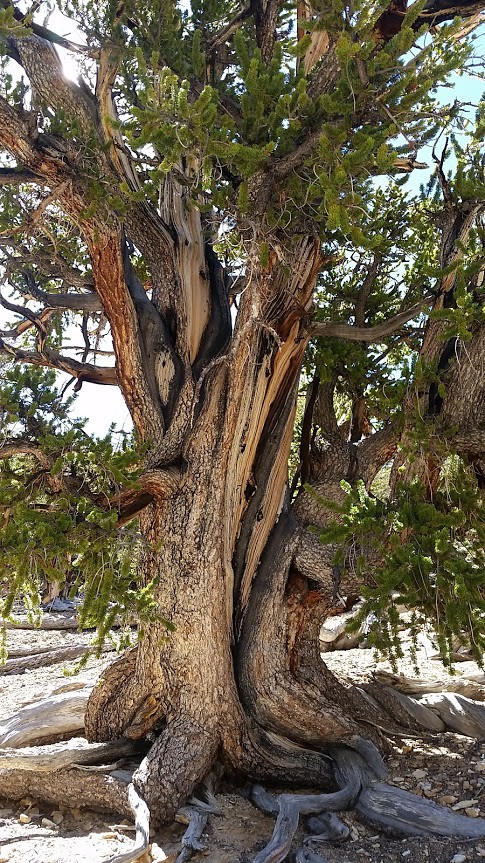 My favourite neighbourhood tree:  a large multi-stemmed pine on 14th and Trimble. It’s on my way to the swimming pool. Unfortunately, I don’t know the species. 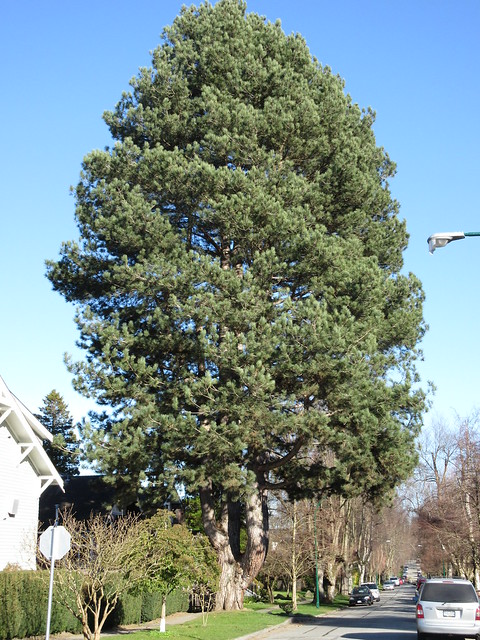 European yew (Taxus baccata) on Mt. Olympus in Greece. Yews are rare in Greece as they are toxic to livestock and farmers cut them down, but this population survived because it is near a monastery. 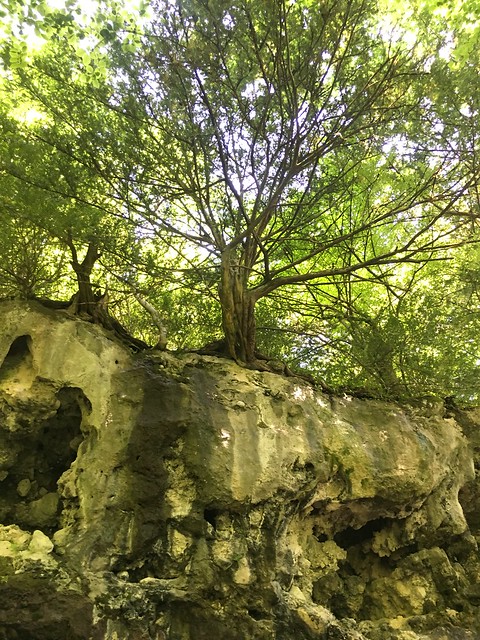 This summer took me from Waterton to Jasper and everywhere in between helping complete health surveys of permanent whitebark and limber pine plots. Whitebark and limber pine continue to decline throughout their ranges mainly due to the introduced pathogen Cronartium ribicola causing the disease white pine blister rust, but also from mountain pine beetle, fire suppression and subsequent encroachment of lower elevation species, and climate change. Started in 2003 by Parks Canada, these permanent plots are surveyed every 5 years to assess the condition of whitebark and limber pine in the Canadian Rocky and Columbia Mountains. Lucky for me, I was able to help with the 2019 surveys while working for Parks Canada and travel to remote parts of these mountains to assess the endangered trees. I can safely say it was the most physically exhausting road trip I have been on! 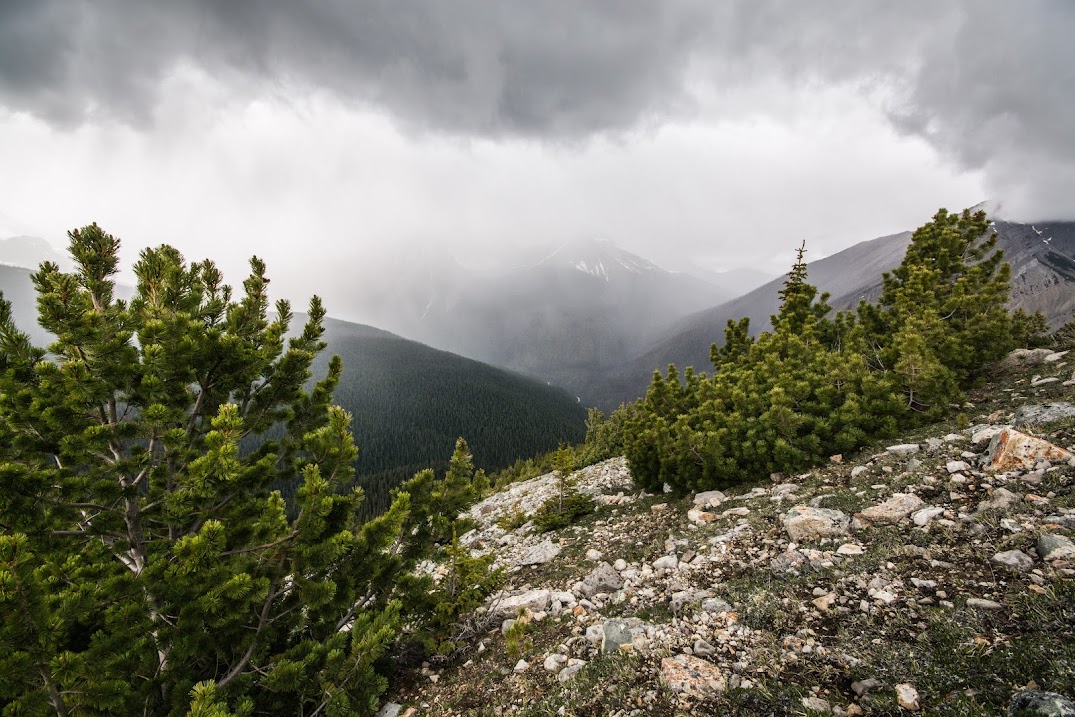 Saying goodbye to my little Douglas-fir babies – this was the last picture I took from my experiment at Totem Field before cutting the plants down two weeks ago for biomass measurements.

It was quite a close and intense interaction with these plants since they were sowed in May 2017. Many and many assessments for phenology, height and cold hardiness. 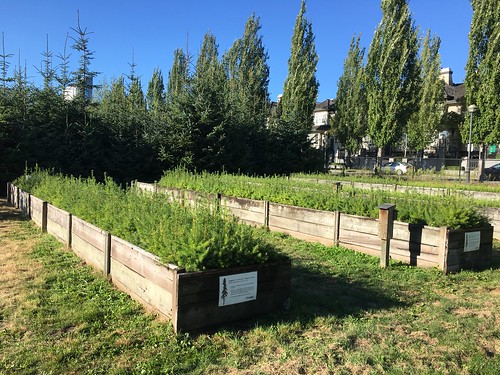 Conference season is in full swing and the Aitken lab is travelling near and far to share what we’ve been up to.

Here’s a list of recent and upcoming conference talks by lab members and associates.

Does local adaptation to drought need to be considered in assisted gene flow strategies for Douglas-fir reforestation? Rafael Candido Ribeiro. In session “B2a Trees on the move: range shifts, potential for genetic adaptation and assisted migration”

When Colin started publishing his papers on calculating climate similarity and novel climates, we wished for

a tool that lets me plug in coordinates, a year and an emissions scenario and get a map of climate analogs and their associated ecosystems.

Looks like someone else was reading Colin’s papers and thinking along the same lines!

This week, Fitzpatrick and Dunn published an online map that lets you look at cities and their future climate analogues and along with a paper in Nature using the sigma dissimilarity metric that Colin et. al developed.

Be sure to turn on the climate similarity map option when you use Fitzpatrick and Dunn’s tool – it’ll show you how analogous the closest analogue city really is! Seattle is Vancouver’s closest analogue, but it’s not a good one. You’ll have to read this paper by Colin et al. on novel climates in BC forests to find out why!

Sally Aitken and I were at our cabin in the west Chilcotin near Tatla Lake for a week prior to the lightening storm that ignited so many fires in the east Chilcotin and the corridor from Cache Creek to Quesnel on July 7th. Along with others in the area of our cabin, we monitored the status of the fires and were concerned about being able to leave should highway 20 (the only realistic exit route) close. Another fire in the Kleena Kleene area to the northwest of us was threatening to close highway 20 west bound to Bella Coola. On July 8th, highway 20 was closed in both directions due to the Hanceville fire and power to the west Chilcotin went out due the Hanceville fire damaging power lines. We packed for a quick exit on July 9th and, as there were no other options, went for a mountain bike ride. When we returned from our ride in the late afternoon we learned that Highway 20 was open eastbound as an escape route, but was still closed westbound. We made a hasty exit. 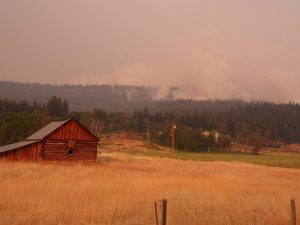 At about 8:00 pm we passed through Alexis Creek heading towards the fire. The winds were from the west blowing smoke away from us, so we had good views of the Hanceville fire on the hills to both the north and south of Highway 20. Fire crews and heavy equipment were working to put in fire guards to protect homes in the Anaham Reserve. As we drove further east, the fire came closer to the road and we drove through areas that had already been largely burned, with residual spot fires that were still active. Lee’s Corner gas station and restaurant was burned down. Proceeding further east from Lee’s corner, we drove into the active fire area, with burning on both sides of the road. This is where some of the video begins. 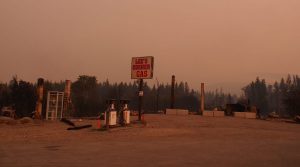 Visualize for a moment a massive fire that is many square kilometers in size working it’s way through a somewhat open conifer forest and grasslands that are tinder dry. A westerly wind is pushing a plume of smoke to the east. The plume is thin on the west edge and rises like a massive wedge as you move to the east. We were driving from the thin edge of the smoke wedge into the thick edge. It got steadily darker. 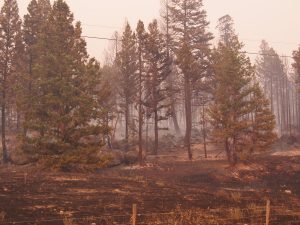 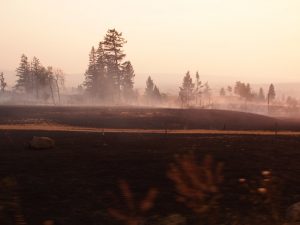 The fire was burning to the road edge on both sides and there was some crowning visible (for non-foresters, crowning is when the fire burns explosively through the foliage in the upper part of a tree). As it got darker the flames appeared more orange. Proceeding further east the darkness became complete and we forgot that the sun had not yet set. We saw periodic crowning, burning stems, and ground-level fires of varying intensity burning erratically on both sides of the road. Whole stands of trees in some spots had turned to red hot, glowing columns of orange light. Driving through the smoke was like driving through a blizzard. The road was only visible with the headlights on low beam and we could only see from 10 to 30 meters ahead. Several times intense fire-generated winds swept across and totally obscured visibility. Sparks and embers were common.

We proceed east through the dark with the fire on either side for about 20 km (from just after the old mill at the top of the Hanceville hill to about Harper Lake). At Harper lake the smoke began to clear somewhat and the fire was further from the road. It was still very dark, but we were able to use high beam and see further ahead. Ominous glows appeared here and there through the smoke and we were very concerned that we might drive into still more of the intense part of the fire. Finally a brighter orange glow appeared ahead and on both sides. Our first reaction was fear that the worst of the fire still lay in front of us. We were relieved, however, when we realized that this new glow was daylight and we were finally emerging from the fire. 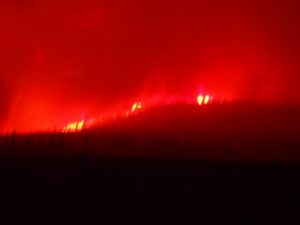 Why didn’t we turn back early on? The trees in this area are not large (few over 20 m in height) and the sides of the road are cleared back some 20 or more meters. The chance of the road being blocked by a fallen tree was very small. We knew that the darkness was due to the thickening of the smoke wedge above us, and although the fire in the darkness looked frightening, it was in reality no worse than what you see in the early part of the video. We monitored the external temperature as we drove. It was about 22C as we entered the fire and increased to about 25 to 27 degrees. A couple of times it spiked to about 35 degrees and we considered turning around, but each time it quickly returned to the mid to high 20’s. As ominous as it all seemed, we were not in serious danger as long as we drove carefully and the outside temperature stayed reasonably low. So, we pushed forward and after what began to seem like an interminable amount of time, emerged on the east side of the fire. Our dog slept in the back, completely unaware of anything but the bag of treats in the glove box. Similar to a small group of cows we saw grazing in a small field, apparently oblivious to the fire all around them.

The video of a small part of our drive is here. Unfortunately, perhaps, Sally was so focused on the fire she lost focus on capturing more of it on video. Priorities.

Lab member Vincent Hanlon was on Quirks and Quarks recently to discuss his summer fieldwork and research. You can listen to the interview here and read Vincent’s posts on the blog here and here.