At the end of my post about the first part of my Master’s fieldwork, I mentioned that there was a thrilling second part coming soon. In this my second blog post, I can say that it was an adventurous and photogenic experience, if somewhat over-generous in mosquito bites.  I only wish there were a third part to my fieldwork, insect-free for once, to round it off nicely.

Carmanah Walbran Provincial Park contains the tallest trees in Canada. It’s a few dusty hours down logging roads from Cowichan Lake on southern Vancouver Island, and that’s probably why not many people go there. It was, apparently, a much more popular destination in the early 90s when the protests that led to its creation were internationally famous; but the intervening years have brought retrenchment and decline to the park’s infrastructure. The trail down to the Carmanah Giant is closed, and the trail upstream is no longer maintained. The park headquarters and a hummingbird research station upstream are both gone, and – most importantly – the road is falling into disrepair. 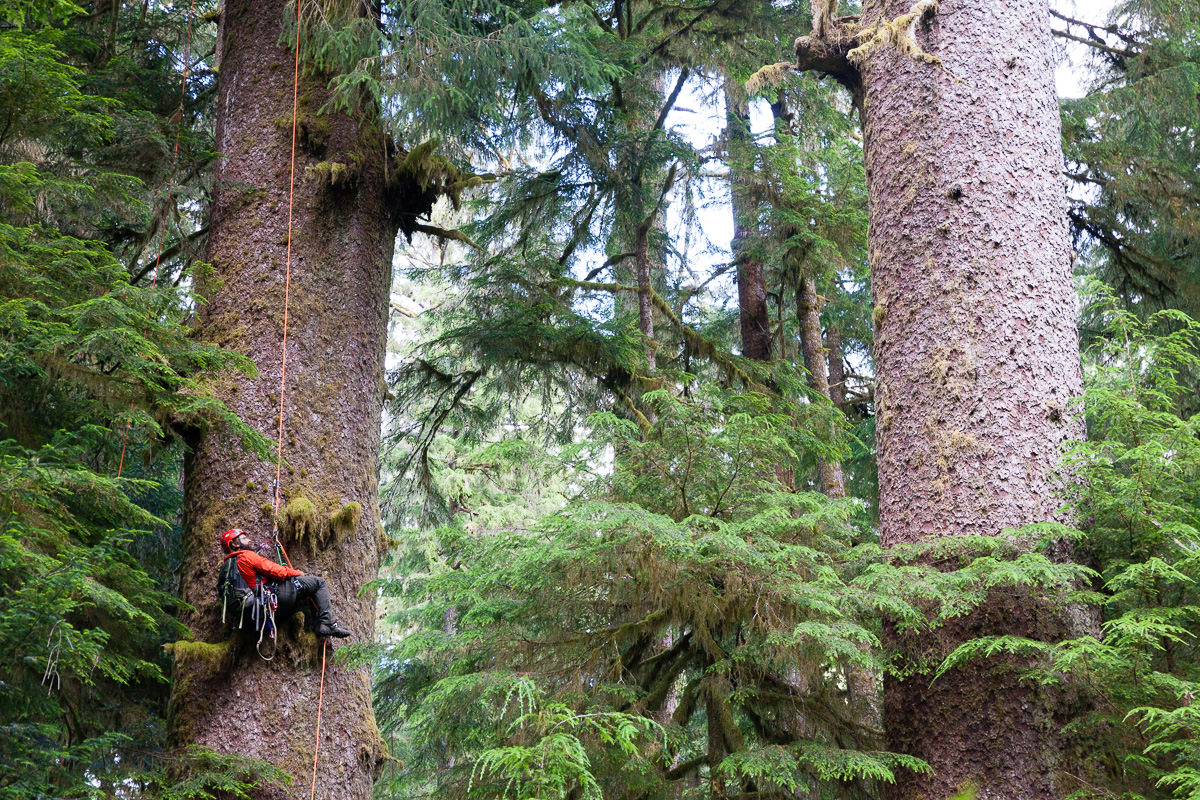 We were there to collect a second batch of samples for my MSc project on somatic mutation in Sitka spruce. The earlier blog post explains the research – in case you’re interested in an overview — but briefly, somatic mutations are changes to the DNA sequence of individual trees that might help tree species evolve more quickly (or they might not – that’s what we want to find out). Because mutations happen very infrequently, we need to increase our chances of finding some by taking samples from the tops and bottoms of old, large trees. The taller the trees, we think, the more mutations we will find. Although we considered many ways of getting samples from the tops of trees (drone, rifle, slingshot…), climbing them is most efficient and, coincidentally, most fun. 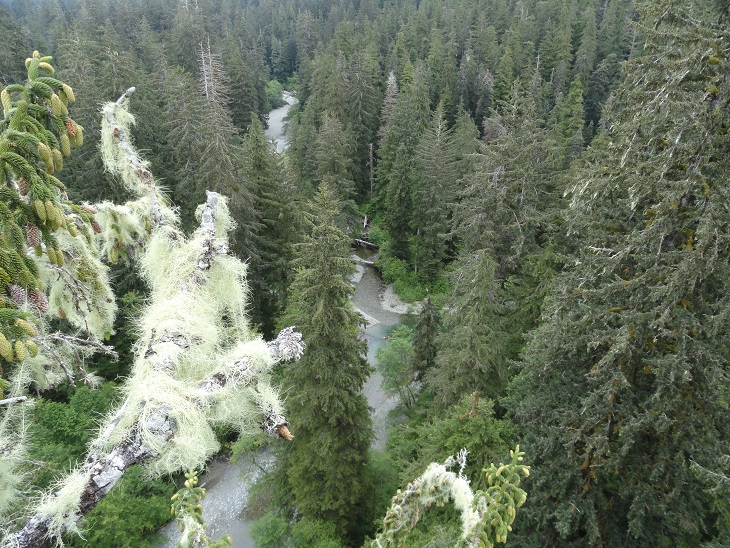 Looking down from The Party Tree past some lichen. Photo Credit: TJ Watt

When we left for Carmanah Walbran Provincial Park we were eight people departing from three different cities, and once again we had too much cream cheese. It was quite an expedition. From the CFCG there were Sally Aitken, Jon Degner, and myself. There were also three exceptional arborists and big tree climbers, Matthew Beatty, James Luce, and Ryan Murphy, as well as two photographers/videographers/drone enthusiasts, James Frystak and TJ Watt, who dropped by for a few days each and took amazing footage. 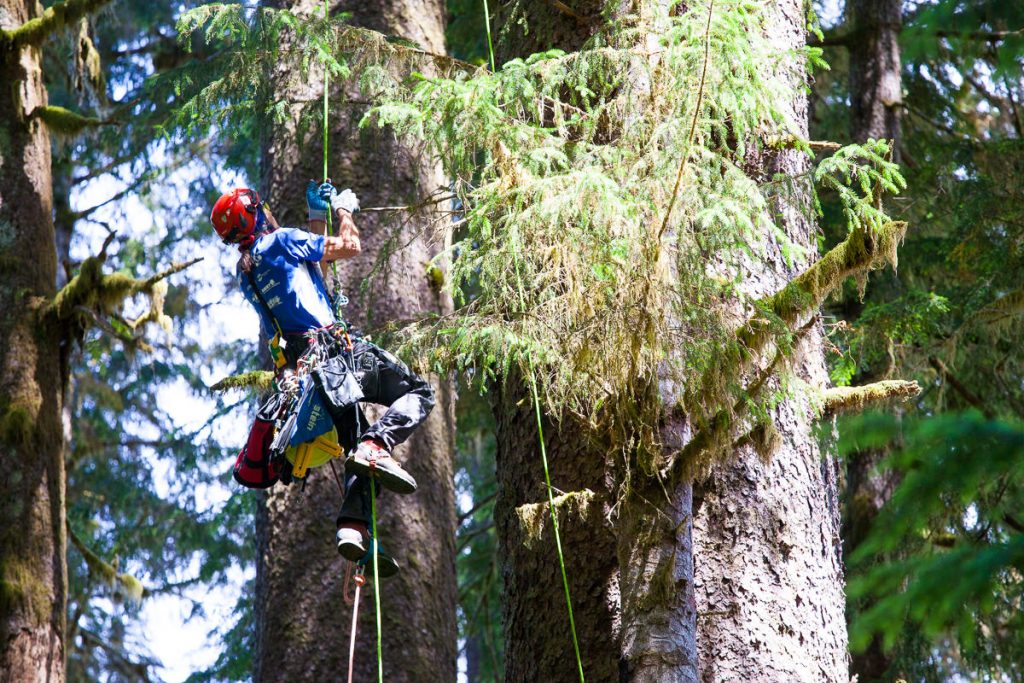 The main difficulty climbing trees this large is getting a rope up into the crown. James Luce calls this process “fishing for tree bass.” He shoots a weight attached to some fishing line over a high-up branch using a giant slingshot, and pulls up larger and larger ropes until there is a solid climbing rope hanging from a solid branch. He then clips into the rope with his harness and mechanical ascenders, and walks up the rope into the canopy. Reaching the top of the rope, he climbs up the limbs to the top like a ladder, attaching himself to trustworthy branches or the trunk as he goes. Once at the top, he collects a few handfuls of needles, drops a tape to the bottom of the tree to measure height, and then either descends or traverses to a nearby tree to sample once more.

Standing in the tops of these trees feels surprisingly solid. The wind makes them sway in big circles, but so slowly that you only notice it when you look at other trees swaying with another rhythm. Because the spruce we climbed were so exceptionally tall, the tops of ordinary trees below look small and far away, and the tops of other large trees are as obvious as church steeples. Throughout the crown the limbs of the trees are draped with mosses and lichens, in thick mats or hanging loosely, which occasionally harbour small plants that would more usually be found on solid ground. Previous research in the Carmanah valley, by Neville Winchester and Richard Ring in the 90s, has also revealed an abundance of canopy anthropods, including roughly 120 new species. 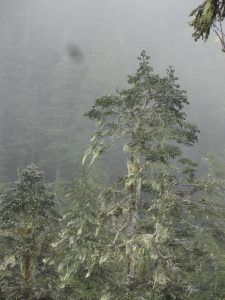 Looking down at the top of the tallest known amabilis in BC, called The Two-Headed Boy for a song and its forked top. Photo credit: James Luce

Since we wanted to register some of the trees we measured with the BC Big Tree Registry, we got to choose names for our spruces. The first two we climbed were 77-meter spires in an open clearing: we named them Major Tom and Ground Control, in honour of David Bowie, but also as a reference to our radio protocol. Ground Control referred to Jon and me at the base of the tree, collecting samples, keeping pedestrians clear, helping with measurements, and answering questions from the climbers about sampling techniques. If Matthew or Ryan were in the canopy we usually referred to them as Canopy 1 and Canopy 2, but by radio James was always Major Tom.

The biggest spruce we found will be named the Party Tree, after the centrepiece of Bilbo’s birthday party in the Lord of the Rings. It was also a tree that we had a bit of party in, though, because all of climbed it at once – five of us that day hanging in the canopy. I think everyone would have loved to spend more time in the monumental crown of that 84.4-meter tree. During some spare time in Carmanah we also found the two tallest recorded amabilis firs in BC, at 60 m and 63 m tall. We’ll submit them to the Registry as well, although I’m sure any diligent big tree hunter could find many taller firs in that park. 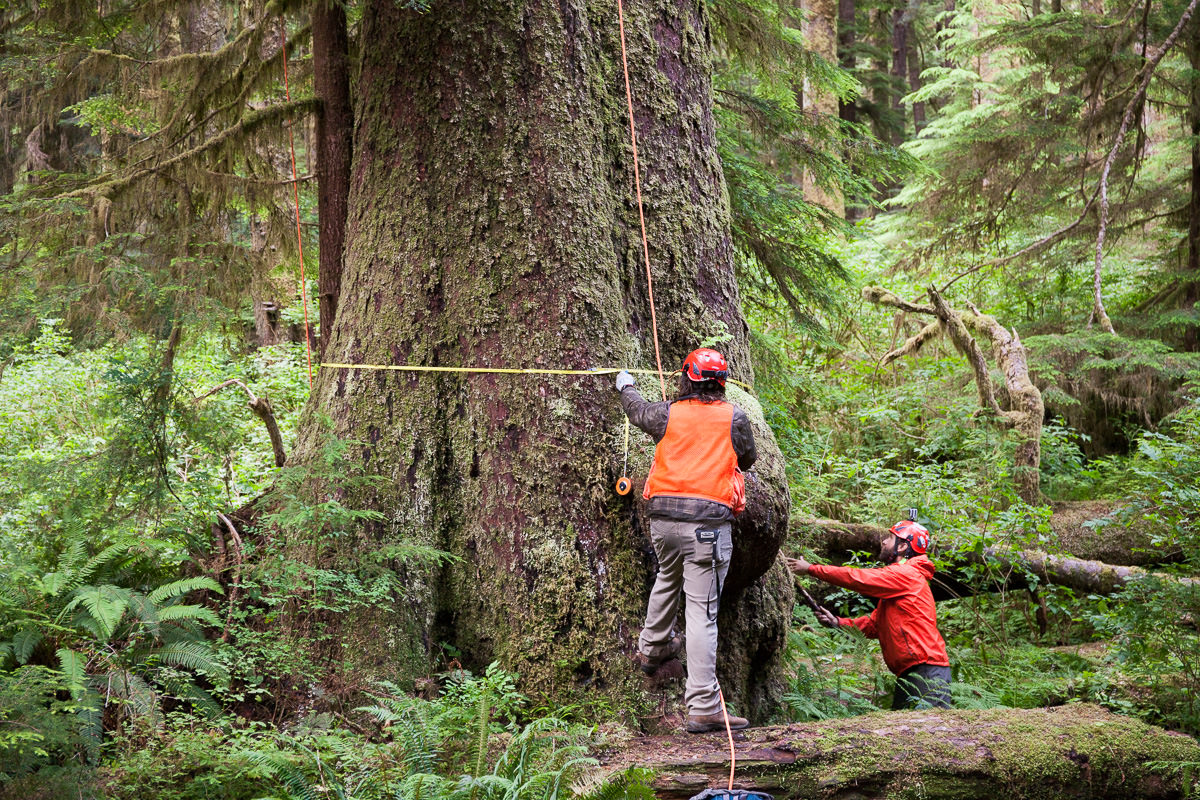 I had been worried, before visiting Carmanah, that there might not be enough large spruce for my project… and that was a ridiculous worry. Within 30 minutes walking from the trailhead we found more than enough big trees. We were spoiled for choice. We climbed 23 trees averaging 76 meters – that’s more than double the height of the UBC clock tower, and taller than the sequoia featured in the famous National Geographic composite of tree climbers in winter. Jon and I spent our days rushing madly around on the ground processing samples and measuring things while the climbers rushed around equally madly, although vertically. But it was a successful trip, a fun trip, and (as Matthew pointed out) the sort of trip that quickly becomes legendary. I’m very glad to have met such great people, and seen a bit of the magic of canopy research. 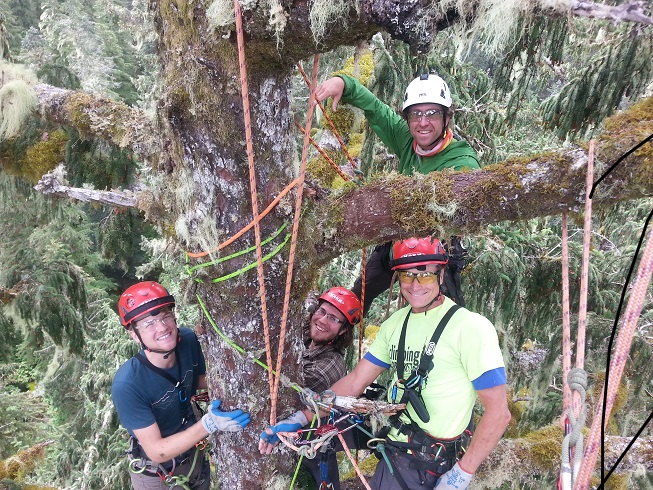 Party in the Party Tree. Normally Ryan was moving too fast to take a picture of, but here we got him, as well as James, Jon, and myself. Photo Credit: Matthew Beatty

4 thoughts on “Climbing in Carmanah: Part II of an MSc”