The Ubyssey has produced more unicorns this cycle than AMS Confidential since the exodus of the unicorn slayer. What they have also done is pissed a bunch of people off today for being “mean” like a Taylor Swift song, so they’ve all decided to now “disendorse” The Ubyssey, which is obviously going to make for a great relationship with The Campus Media if they’re elected, but that’s another scandal for November or something.

All you’re ever gonna be is Mean

Ugh, I’m tired, let’s let Facebook do the rest of the talking:

and then she went on and on, and other people jumped in on the action. Like Hans. 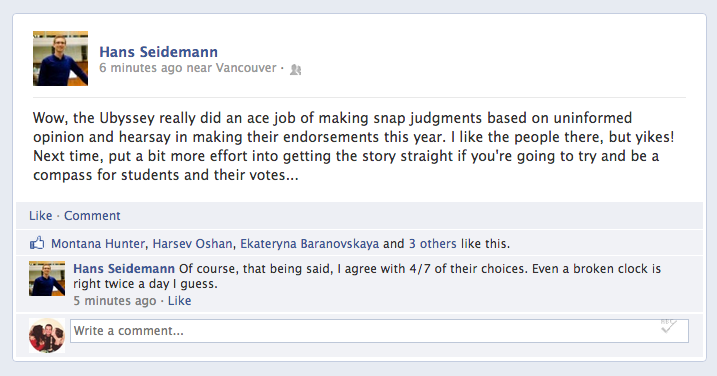 Note: all the people who have “liked” this so far are people who didn’t get endorsed (or who got endorsed less thoroughly than they would have liked [Tanner]). 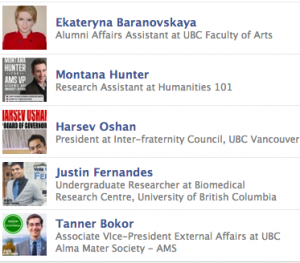 And then there’s former hacks, who The Ubyssey also never endorsed. 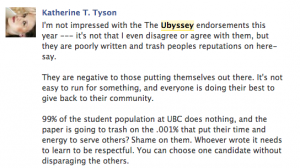 And finally, the Other Campus Media Besides Us who wasn’t endorsed by The Ubyssey last year also disendorsed them. 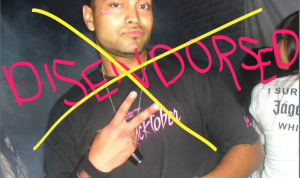 The last time The Ubyssey disendorsed someone it was Ryan Trasolini, I think [Ed: And he also called the Wah-mbulance]. If you are new to our blog he is a super hot-shot DJ and that makes him better off than the rest of the former AUS Presidents. Anyway, recap.

Earlier, we disendorsed our first candidate. And then our second. And now, for the first time probably ever, this is a Double Disendorsement. Why? Because The Ubyssey beat us to it and disendorsed Harsev Oshan for BoG rep. We told you, disendorsements: so hot right now. 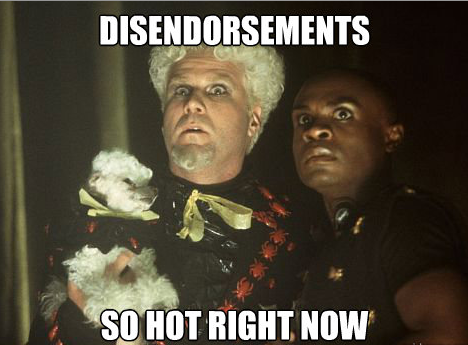 “I’m sorry one of my execs decided to leave money in the exec office for the weekend because it has proven to be a safe space over the years.” 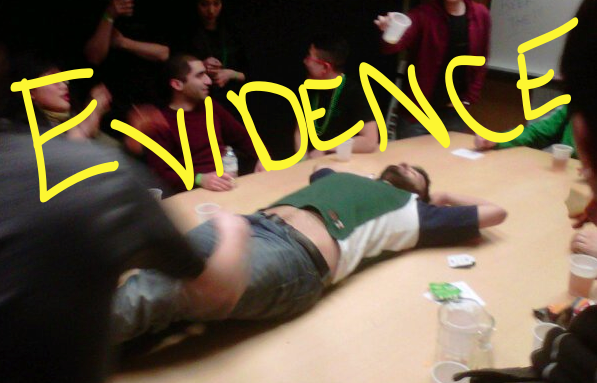 For not attending some meetings – Serving students does not mean I should not give attention to my academics. I’m sorry if my academics take priority over AMS meetings sometimes.

Okay, this where I got all like WHAAAAA. Do you even know what the Board of Governors IS? It’s like, a full time job. And the BoG meetings last ALL FUCKING DAY (just ask @ubysseynews) and you have to travel to Kelowna for some of them (on a private plane whatwhat) and you have to sit on subcommittees which have more meetings and you have to meet with students and go to consultations and just MEET MEET MEET all the time. And there are only five “real” meetings which produce all that work. Whew. I’m getting tired just writing that run-on sentence.

When asked what Harsev actually wants to do, he said he wants to have more consultations between BoG and students, and “make sure that international students do not fall through the cracks because of the bridge programme.” I don’t know what the bridge program is and I don’t care. [Ed note: In this, Taylor is like many UBC students. It’s that intro program the university wants to put into place to help bring promising international students “up” to UBC level. Pros: would help transition people in, make a more diverse UBC community. Cons: Could be a thinly-veiled attempt to suck more money out of fat international wallets.]

But those aren’t things to run on. If you are going to be putting your blood, sweat, and tears into some uber boring position you better fucking want it. Harsev sounds like he doesn’t even know what he’s getting himself into.

Which is what started this whole damn thing: one time when I was sitting in The Gallery (RIP), I saw Mike Duncan and Sean Heisler meeting. And Mike was bringing Sean BINDERS. Not one, not two, I’m talking a bunch of thick, black binders. Granted – this was before the iPad, but still. Binders full of boring documents that you have to pore over with bated breath.

And yes, maybe even a binder for a woman if you elect Erin (Conny was already DISENDORSED).

3 thoughts on “Binders Full of Disendorsements”