AMS VP Academic, Ben Cappellacci, has pulled off what some are calling the greatest trap in UBC’s illustrious history. He has somehow lured Admiral Ackbar, the preeminent source of all trap locations on campus, into a trap. The trap of Associate Vice President Academic.

We here at the Confidential were really excited when the Admiral was elected. We’re going to be extremely sad as he is forced to resign from council. We might even shed a pink tear from our collective sparkle eyes.

This isn’t some April Fools joke.

This isn’t a trap.

To Whom It May Concern:
I am resigning my seat as an Arts AMS Rep, effective immediately.  I have found that my Council chair does not swivel to the standards I became accustomed to in 1983, and the distinct lack of spaceships under the AMS’ command makes it difficult for me to be effective.
Because I am taking the position of AVP Academic, I have no choice but to resign: the AMS can’t repel conflicts of interest of that magnitude.
I look forward to working with everyone in my new capacity, and would like to say that I do admire the amount of time and effort you all put in to bettering the UBC experience, especially since most of you do so as volunteers.
Yours sincerely,
Admiral Ackbar / Sean Cregten 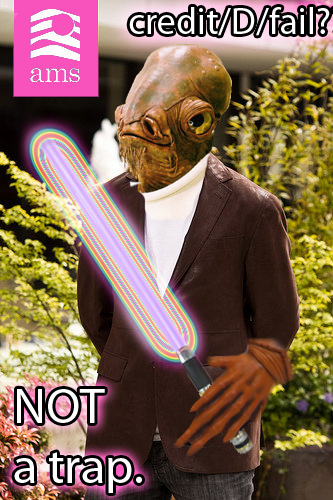 he'll safewalk you home too.