Once upon a time there was a storyteller who wandered the world enchanting people with her words. Some called her a witch, others an old hag, but most just called her magic.

Her long hair was filled with flowers and twigs and a bird’s nest or two; she wore flowing shirts and billowing skirts covered by a long torn robe that allowed mice and squirrels to cling to her train; the staff she carried was a branch given to her by the oldest wisest tree of the forest and lizards played along it’s grooves.

She had been everywhere that someone could go and even a few places you couldn’t. When she got someplace new she would find a nice tree to sit and lean against and she would begin telling stories. From her seat her words would be taken by the wind and circle the world twice over and find a place to live among the hearts and minds of her listeners.

Her audiences were made of villages, animals, trees, and other magic sorts. They 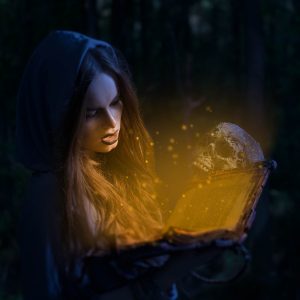 would listen and they would see the truth in her stories of things they may have never seen. She told of a world where the only thing known was water for miles and an otter came forth and said it was true. And what else would her stories be about?

And so it was true.

But one day the wind told her of a gathering of sorts for witches. She traveled for one day and many nights to get to where it was being held and once there she found she was late. She walked towards a light in the woods that had shadows dancing around it. As she came to the edge of the treeline she found the animals too scared to go any closer but too curious to retreat. She shook her head. She felt shadows trying to grab at her.

She entered the gathering and heard witches of all sorts bragging about what they could do. Some could fly into the worlds of the sky. Another could swim to the deepest depths of any ocean. Some could transport themselves and others could turn invisible. One could use the natural elements however she felt. Another could transform items into anything she wanted. Some bragged about creating enough gold to make them richest. One even claimed to be able to use mind control on any living thing. What do you notice about these witches?

The conversation took a turn for the worst as they began competing in strength and creativity of spells and charms. They could all do the nice things, but the darker arts were more difficult. They started fires and created lightning. They made bugs that tried to scuttle by unnoticed into poisonous beasts. They created potions and spells that created all sorts of evils.

The storyteller shook her head. She began to feel tired watching these witches play with the nature of the world. She got an ache in her knees and a kink in her neck and then a boisterous witch came up to her asking why she wasn’t having any fun. Would you be having fun?

The storyteller asked the witch if she wanted to truly know evil. “And you think you can do better than what has been done? Well then have at it. Everyone, we have another contestant,” she laughed as she gave the storyteller a seat in the center.

A male witch approached the storyteller, “What do you intend on doing that is worse than what has already been done?” 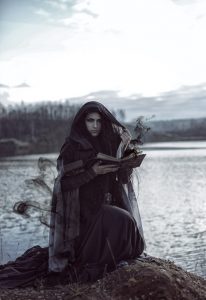 The woman looked at that witch long and hard and simply said, “Just listen.” From there she proceeded to tell the most horrifying, intriguing and heartbreaking tale that has ever been told. It began happy enough, as almost all stories do, but she stopped right at the place when everything was a horrible, chaotic mess and her audience held their breath and waited to hear the final resolution.

“And then what happened?” the witches prodded.

“That’s it,” she responded.

“But that can’t be it. That’s not a proper ending,” said a witch of four.

“Well maybe not all stories have proper endings,” she said sadly.

“Well then take it back,” the girl insisted.

But she could not. As she said her final words, the wind took them away across the land and it was too late. For once a story is told, it cannot be called back. Once told, it is loose in the world.

And so it was true.

I’m a nanny, and the kids I work with are obsessed with stories. Every day as we walk home from school I’ll tell them a new one. Sometimes they’re well-known, sometimes they’re stories about my childhood, and other times I just make them up.  For me I like telling them stories because I can get them to contribute as well. I ask them questions like “What would you like their name to be?” Or “What did his house look like?” and they can add whatever they want to the story. I showed their additions in italics as these parts will change with each telling. And I imagine telling in a group would be significantly different. Also, while telling a story to two children around 5 and 7 I’ve found that interruptions occur quite frequently. Sometimes they ask questions or ask to add something in, but there are also times where they just get distracted.

Most of all I like telling these kids stories aloud because I can take ownership of it and have the kids engage with it as well. I believe in this because I was raised listening to the stories of my grandparents and parents. There’s something more personal and exciting about hearing someone’s individual voice recount an event.

StoryCorps is the best example of this (you can find more information about their mission here). You can listen and/or watch and really experience these short human experiences. Just like Thomas King these people probably initially think “there are other people with better stories; who cares about mine?” But StoryCorps argues otherwise and I agree. I believe that finding a way to tell your own story is an important part of understanding yourself and a way to connect to others. I teach these children the same and they’ve begun gaining the skills to recount their own lives with excitement and pride. This pride is an invaluable skill that I think many people may not understand is connected to storytelling. StoryCorps has also initiated a Tribal Libraries program in which Native communities can use StoryCorps resources for recording and sharing orally.

Storytelling has always been a part of my life and I hope that initiatives like StoryCorps can prove how important they are to children and adults alike.