I had a meeting with a faculty member a couple of weeks ago about “tablet teaching”. For many folks tablet=iPad; given he’s a scientist I suspected he might be using a Wintel tablet–a PC with a touch screen.  Turns out both were right: he was using a Wintel tablet, but was interested in possibly moving to an iPad.

I was mightily impressed. And shortly thereafter was determined: is there an app for it? In fact, the number of productivity apps for presenting in a more interactive way was a surprise. After testing a few, one standouts. More about the app in a minute…

Using an iPad to teach/present/lecture/natter

If you want to use your iPad to teach, you need to get yourself properly kitted out. For sure you’ll need:

If you want to use a presentation slide deck upon which you can easily annotate–and one your students can print post-class if they wish–a white background works best (and uses less ink). You’ll also need to accept that no slide animations (on a slide or between slides) will work. Which, contrary to many people’s assumptions is not the end of the world.

Finally, most apps that allow you to annotate on PowerPoint will convert your presentation to either a PDF or JPG: maintain control over this by creating your own PDF of the full slides (not handouts).  Now we’re ready to roll!

2Screens couldn’t replicate everything my colleague did: it didn’t allow zooming in as deeply. But on balance that’s a minor limitation–this app rocks.  Here’s a quick overview.

This last point is easy to underestimate: by using Airplay via AppleTV, I can move around with my iPad in the classroom. Range is estimated at 10m, which is enough to wiggle around a fair bit of even many megalecture halls.

The interface isn’t entirely intuitive: the fact that the manual is for an earlier release of the app (with significant differences) entirely unhelpful. But it didn’t take long to get the gist of things.

Here’s the main interface whilst pushing a PowerPoint presentation: 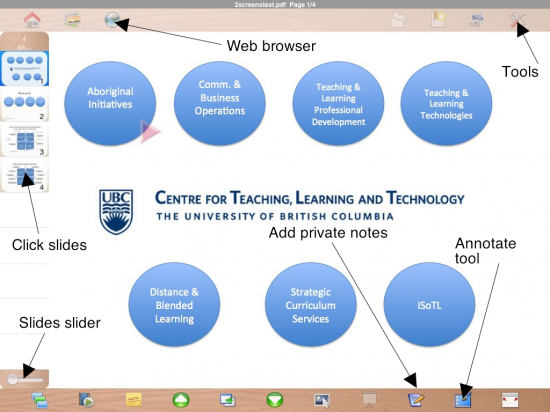 As you can see there’s a few ways to move through slides (click or slide slider; there’s a couple of other ways too), the enhancement tools for adding private notes and annotate the slides are on the bottom. The web browser and tools are accessed via the top toolbar. Tapping any of these–ideally with your stylus–enables them.

With respect to the annotation tool options you can select to draw shapes, lines, or freehand. You can also pick the colour of the annotations–very useful, but do your audience a favour and avoid using white text on a dark background (owsie on the eyes). 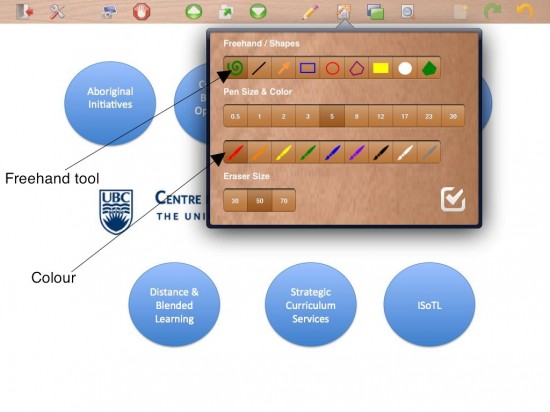 You can also pick the point size of the pen (in pixels) as well as the eraser size. How do you enable the erase? Tap the pen in the top toolbar so the erase is point down!

Overall, though, this is a great start. Already I can’t wait to use this at a conference–I presented using my iPad at a conference in June and it worked well. Being able to annotate would’ve rocked it.