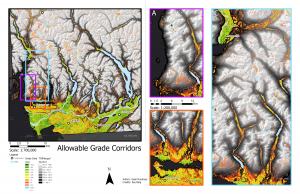 Grade/slope is a considerable limiting factor in terms of physical geography and the feasibility of rail lines. Unlike other modes of transport, heavy trains must maintain a moderate slope to allow for traction.

For the purpose of this investigation, we will be relying heavily on information from technical studies (here) on high-speed rail lines. This information is subject to change given technological innovations.

Currently, the provincial government and CN rail limits grade to 2% for industrial freight lines. Luckily passenger and high-speed rails maintain more friction and can climb greater slopes but not by much. The maximum gradient for most highspeed rail tracks remains at around 4%. Because of this, the grade map takes into account a maximum value of around 6% due to the inability for an effective map at 4% grade maximum. There are options for overcoming grade include rack-and-pinion systems (essentially a gear and cogs which pull the train up), spiral tracks, or tunnels. Due to the technical nature of these systems these would are all considerations for future analysis.

It is important to note that many highspeed rail lines that reach considerable speeds must maintain a relatively wide turning radius. The Shinkansen line in Japan for example must maintain at least a 2500-4000 m radius. This is significant because, as we will see in later maps, the proposed route along transit corridors in the Sea to Sky corridor does not have sufficient room within the transportation corridor to build a new line. Since the existing rail line is used quite considerably for freight repurposing existing lines would be challenging without removing a vital link to communities in the region.

Additionally, our analysis only measured the existing grades, not the possibility to use cut and fill techniques to make a more desirable grade. One will notice that along the existing rail lines on the Sea to Sky corridor much of the grade is not favourable for rail, despite rail currently existing there.

The processing power of our computers could not handle a resolution large enough to parse out small nuances in slope information. This can be seen along the Sea to Sky corridor where there is a limited indication of existing geographic amendments. 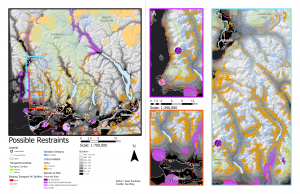 For Rail and Road Data we added the width of an average two-lane highway and the width of a standard rail line with right-of-way information provided by the provincial government and CN in highway building specifications to create appropriate and realistic buffers around existing transportation infrastructure. These were then converted to a boolean operator for the raster polygon

Parks were recognized as a factor within the suitability analysis were given a 1 (Ranked from 1-10) so that it is highly unfavourable, however, in an EIA process, it can be overruled. 10 is given to areas outside of the park, for example, thus areas outside of the park are highly favoured, but parks did not completely remove the possibility of construction within.

Water features were given a 0 on the suitability analysis to prevent recommendations that overlay the lake features. Lakes could be crossed with bridges, tunnels, or floating tunnels/bridges but for the purpose of this lab, they are considered unsuitable. Critical habitat rasters supplied by the BC Ministry of Natural Resources also attempt to account for the riparian areas in relation to significant lakes so no riparian zone was included.

Many of the streams in the coastal mountains feed into basins for Vancouver and Area’s water supply. The provincial government has supplied “sensitive stream polygons” from IMap BC which identify sensitive streams. Legally one must acquire a permit to access or remove water from these streams, this considered, there was limited information on the legality of crossing the streams in construction work.

Best practices recommend around a 15 M riparian area on each side of the stream’s centerline. In the process of making stream rasters we applied a 15M buffer around the streams first and then converted this to a raster which would be incorporated into the suitability analysis.

The provincial government gives access to two main databases of at-risk species (judged by the province) as well as critical habitat. The species classification methodology can be found by clicking the photo below or (here). 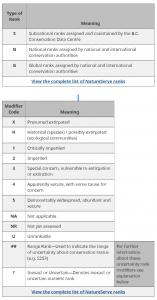 In the suitability analysis, we made building a rail line through an S1 habitat a constraint, and from S2-S4 classifications we made it more unfavourable to build along with these ranges in correlation with their sensitivity. The exact values can be found in the screenshot below.

For the purpose of this analysis, we weighted these values similar to all other values except for slope and existing infrastructure (rail and highway)  which are both more substantial limiting factors. Slope is the most pronounced of the two due to limitations in rail lines posed by steep grades.

The suitability map was created through the selection of constraints and factors.

Constraints such as water features and existing roads and rails with applicable buffers were converted from feature classes to rasters, and reclassified with NODATA being converted to ‘1’ and any other data converted to ‘0’. This raster was then multiplied with the factors raster to remove constraints.

All of this was completed in a model builder toolbox which can be downloaded as python script (here) for exact specifications and reclass values. Generally, the goal was to meet researched objectives for each constraint most cells were weighted from 1-10. In some cases, such as S1 sensitive species rasters, the raster cells were reclassified as 0 to automatically nullify development in these areas. 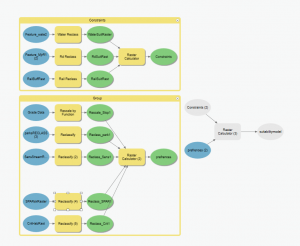 To accurately account for slope suitability, slope favorability (Also weighted from 0-10 through a reclass) was manipulated through the “Rescale By Function” tool. The exact settings were as follows.

The lower spread allowed for a more reasonably weighted slope. That considered, these values were extremely generous given the slope requirements of highspeed rail. By and large, the contribution from slope values included above 7% was not overwhelming relative to the overall distribution of slope data (even despite the generous assumptions). The slope values were also given a multiplier of 5 given the factor’s importance in the construction of the train track.

Since “no-build zones’ were included in constraints and given figures of 0 in factors analysis, the effect of the remaining factors (outside of slope) was not as important in terms of physical geographies. This considered, legislation regarding building in provincial parks and potential environmental harms were still significant and the model attempted to avoid them by prioritizing an avoidance of critical habitat and provincial parks with multipliers of two.

In the future, it would be prudent to manipulate the multipliers and reclassifications with more research and consultation to build a more effective map that takes into account other potential values. Public outreach in an impact assessment process would also be helpful in deciding the potential for construction along sensitive routes. 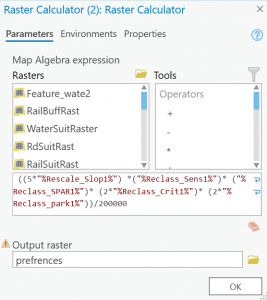 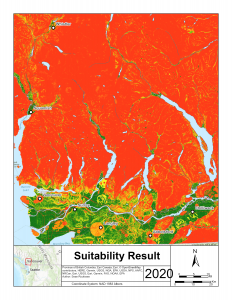 Results of the final suitability 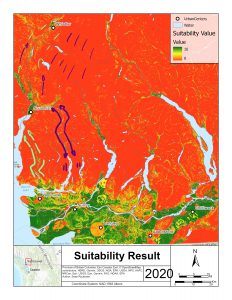 ^Annotated Results of Possible Corridors. We can test this using the Lowest Cost Route Map. 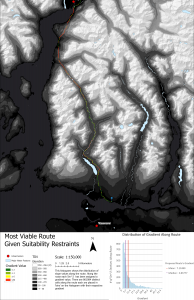 Using this Suitability raster we were able to use the “Lowest Cost Route Tool” to find a route from Squamish to North Vancouver which has the most favourable suitability outcomes (Or lowest cost). This produced a line polygon that follows our lower proposed route indicated on the annotated suitability map.

We smoothed this line with 10M smoothing and buffered to 20M. We then converted this to a raster and overlaid our Slope raster using the ‘Extract by Mask Tool’. This allowed us to overlay slope information along the route. 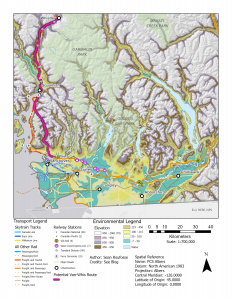 Despite the favourability of this route given the suitability analysis, we find that it will still be quite challenging to construct a high-speed rail line along this path, particularly on the approach to Squamish coming off of the North Shore Mountains.  Depending on provincial priorities for the line some sort of hill assists such as a rack-and-pinion system might be useful for both ascending and descending this grade. This is subject to engineering review and more small scale analysis of the region. Unfortunately, due to a lack of more detailed data, there exists an uncertainty surrounding the feasibility of following the riparian area of Phillis creek and the existing power-line R/W infrastructure. The full extent of the potential environmental impact is challenging to quantify without an in depth IA process, as are the potential impacts to local communities. This said the vast amounts of unknowns allow for extensive room for expanded research.

Moving forward it would be prudent to assess these areas with remote sensing techniques to better understand the suitability of a highspeed rail line at an appropriate scale. Remote sensing could allow for information to be gathered on a smaller scale, thus increasing the accuracy of data.

The intense slope variation and gradients present challenges for construction and have the potential to vastly increase construction costs. Considerations must be made regarding habitat fragmentation and other sustainability-related issues to avoid further biodiversity loss in the future, particularly in regards to sensitive water resources.

In future studies more should be considered regarding the built geographies of urban cores in Metro Vancouver, The Fraser Valley, and along the North Shore and Coast. In terms of physical restraints such as slope and other environmental impacts, it appears that highspeed rail between the Fraser Valley and Vancouver would be a logical first step, focusing on the Sea to Sky portion in a second phase. This is granted that considerations around ALR and other Fraser Valley specific considerations are made.

Possible extensions include a line from Whistler to Quesnel and Prince George and from Chilliwack to Kamloops, Kelowna and Calgary. As mountains shift from the steep coastal ranges to smoother and flatter interior ranges the feasibility of expanding increases, however, the logical connections pointed out in the initial proposal would need to be built to justify these less (but still) technical options.

Additionally, more detail into other limitations such as soil or rock composition and slope stability could be of particular importance from an engineering standpoint.