Without thorough consultation, it would be irresponsible and presumptuous to create a suitability model for the high speed rail (HSR) based on a series of social considerations such as population density, low income prevalence, average commute time, and presence of BIPOC people. While literature on this topic do touch upon the possible positive and negative impacts the presence of a HSR would bring to a community, the local context should be prioritized before making any rigid assumptions. A chapter in Henríquez, & Deakin’s book, ‘High Speed Rail and Sustainability’ indicates that the general population in the case of California’s HSR proposal had a mixed reaction. Some looked forward to the conveniences of an easy commute and the possibilities for an increased economy in the area around the stations; whereas others were concerned about how the construction and infrastructure may displace or intrude on their community/home (2017).

Economically speaking, a study done on ‘the impact of HSR investment on economic and environmental change in China’ indicates that building a high speed rail would prove to stimulate the economy in the long term (2016). In fact, their calculations showed that an equivalent to a 10.3% GDP increase occurred due to rail investment from 2002 – 2013 (2016). While this was the case in China, the proposed Whistler to Chilliwack HSR may not show the same amplified effects due to the presence of an existing (albeit less efficient) transit infrastructure.

Another study on China’s comprehensive HSR system questioned the impact on social equity within those who could afford or access the rail (Ren, et al., 2020). The article highlighted that cost of fare, travel time/distance, door to door travel, and geographic accessibility are possible areas of deterrence when users chose their mode of transport (2020). Applying these factors to BC’s context, the areas where further study and consultation are needed become clearer. Noting that in terms of travel time, it is likely that only those who are travelling more than 30 minutes away from their home would feel an immediate benefit towards the HSR. Additionally, taking into account the average person’s desire for door-to-door convenience when transiting, it may be that only consumers who work within a five minute walk of the HSR stations will be more persuaded to use it.

These sorts of social considerations need to be brought up in consultation with the public. It is only then that more concrete socio justifications of the HSR route can be made with confidence. Some examples of how population data can be used to get an idea of areas where increased stakeholder consultation should be held. 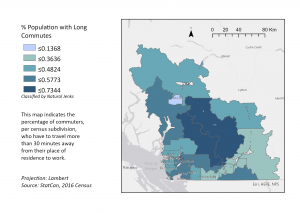 For a larger PDF version of the Layer 1 Map – SocM1, click here.

The above blue Map – SocM1 shows the population with long commute layer and indicates the percentage of commuters, per census subdivision, who have to travel more than 30 minutes away from their place of residence to work. 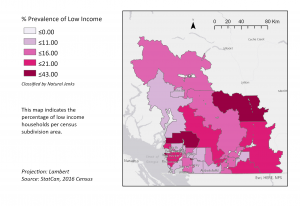 For a larger PDF version of the Layer 2  Map – SocM2, click here.

The above pink Map – SocM2 shows the percentage of low income households per census subdivision area. 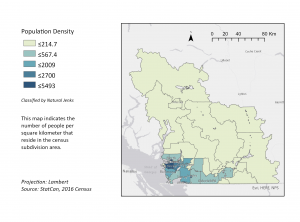 For a larger PDF version of the Layer 3 Map – SocM3, click here.

The above Map – SocM3 shows the population density layer and indicates the number of people per square kilometer that reside in the census subdivision area.

Summary Map of the Interaction of Social Considerations 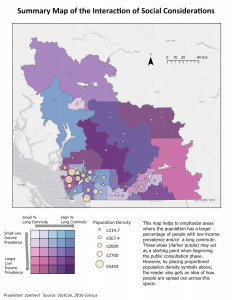 For a larger PDF version of the Summary Map – SocM4, click here

The above Summary Map of the Interaction of Social Considerations (Map – SocM4) helps to emphasize areas where the population has a larger percentage of people with low income prevalence and/or a long commute. These areas which include Sea to Sky and Fraser Valley Communities (darker purple) may act as a starting point when beginning the public consultation phase. These areas would seemingly benefit from a lower cost high speed rail. However, by placing proportional population density symbols above, the reader also gets an idea of how people are spread out across this space with population density increasing closer to Vancouver.