A lot of the data sets that we have used contain more than one region of interest so we created new layers containing just the data we needed (ex. transit/rail road data needs to be cut down and combined). To do this we simplified base maps by viewing topography data to anecdotally indicate areas ineligible for rail, we then cut this area out to focus on particular corridors. This will be overlaid on a simple base map to ensure cartographic associations relevant to the user, but not over utilize data.

We have created two maps one that examines two potential routes via the creation of a TIN and DEM out of the topographic/road/transit data so that an environmental suitability model can be run.

On a separate map in order to understand some of the social considerations of the impacted area, we have used census subdivision areas to analyze the population data, average commute time, and prevalence of low income households. The interaction of these variables within the different census subdivisions help us to begin to understand the current realities of each jurisdiction’s ethnic and social makeups. We then overlaid these maps and data points  to understand areas of particular vulnerability. The implications of this methodology are to begin to think about where stakeholder consultations should begin and where there may be the most resistance to the project.

We have created maps which include a base map, Environmental Suitability Analysis (without specific locations), Social Considerations Map, Transit map with existing transit infrastructure, and relevant habitat areas. These processes have been included in a model builder toolbox to increase the utility in other use cases.

Specific tools that we have used include: 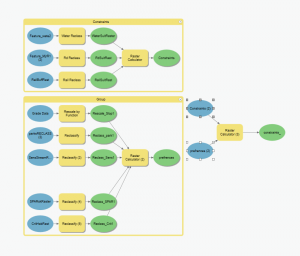