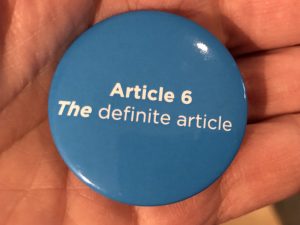 With more than 10,000 delegates from almost 200 countries, dozens of panels daily, and countless government, NGO, and business pavilions, there’s a lot to do at the international climate conference currently underway in Madrid. With so many options, one might wonder why Tuesday afternoon saw several hundred people jammed into a hot room for a three-hour meeting of the “Subsidiary Body for Scientific and Technical Advice Contact Group on Article 6.”

Although the Paris Agreement established goals and broad strategies to meet them, further guidance is necessary to determine how it all will work in practice. Most elements of the so-called Paris “rulebook” were completed at the international climate negotiations, COP-24, last year. However, in light of remaining disagreement, the rules for Article 6 alone were deferred to COP-25 in Madrid this year.

Article 6 is the section of the Paris Agreement that authorizes international emissions trading. Section 6.2 envisions government-to-government trades, by which one country could meet its reduction target in part by paying another country to make extra reductions beyond its own target. Section 6.4 offers a mechanism for the private sector to go “above and beyond” to earn emissions reduction credits that can then be sold to other private actors or governments.

Article 6 holds the potential to make or break the Paris Agreement. At best, by providing a mechanism to meet targets at a much lower cost, Article 6 could inspire countries to increase the ambition of their national targets. At worst, weak rules for Article 6 will encourage violation of human rights and authorize illegitimate reductions that merely give the illusion of progress.

Which vision will prevail turns on how several key issues are resolved in the days to come.

The most fundamental issue in certifying reduction credits is to demonstrate that the activities in question would not have happened anyway, a standard referred to as “additionality.” While that sounds obvious, it’s tough in practice. For instance, as the price of renewable energy falls, projects that once seemed cutting edge can suddenly pay for themselves. Credit for extra action is no longer warranted. The challenge is to devise rules that allow outsiders to assess what is truly additional.

The additionality question is closely related to a debate over carry-forward of unused Kyoto Protocol credits. The predecessor to the Paris Agreement first established emissions trading both between countries and through investment in private projects. There are, however, serious concerns about the legitimacy of many of the resulting credits.

In some cases, countries such as Australia accumulated surplus credits simply by setting unambitious targets up front. Similarly, some projects are believed to have gamed the system, for instance by temporarily increasing production to justify credits when emissions were later reduced simply by cutting production. Some analysts estimate that there are upwards of 20 billion tonnes of unused Kyoto credits. Given their questionable legitimacy, allowing signatories to the Paris Agreement to meet their obligations with “hot air” Kyoto credits could greatly undermine already halting progress toward global climate goals.

Article 6 specifies that in emissions trading there should be a “corresponding adjustment” so that the same emissions reduction cannot be counted simultaneously toward two countries’ compliance. Again, that sounds obvious. It’s not a trade if the same reduction appears on both countries’ ledgers. Yet there is continuing disagreement over which reductions require such an accounting, and whether adjustments should be mandatory or voluntary.

The Paris Agreement states that trading in carbon markets should ensure “overall mitigation in global emissions.” That suggests going beyond merely offsetting one party’s reduction with an equal, if less costly, reduction by another party. However, some argue that realization of cost savings itself will promote increasing ambition. Others are proposing that a fraction of credits be cancelled with each trade.

Kyoto Protocol experience also has revealed potential negative impacts of emissions trading on Indigenous and other local communities, for instance when forests where they live or on which they rely for their livelihoods are designated “off limits” as part of an emissions credit swap. NGOs, Indigenous peoples, and some countries are pushing for explicit recognition of human rights in the Article 6 rulebook, but they face strong resistance from other countries.

The stakes could not be higher, yet with 10 days to go in COP-25, negotiators remain a long way from agreement. The countries most vulnerable to climate change, including low-lying island states and least developed countries, are pressing for strong rules to ensure environmental integrity, no carry-forward of Kyoto credits, and retirement of a fraction of credits with each trade. However, countries that surpassed their Kyoto targets or hold unclaimed project-specific credits hope to retain those potentially valuable credits, while Brazil is leading a group arguing for a voluntary approach to fight double counting.

What are the implications for Canada?  Stay tuned for my next instalment from #COP25 in Madrid!