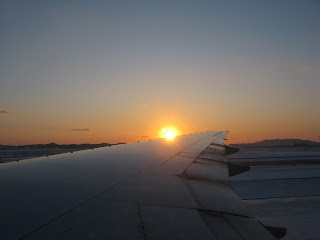 A lot has happened in a very short time. Hard to believe its only been a few days since we landed. The flights were long. 12 1/2 to Korea then 9 1/2 to Mumbai. ouch. A nice Indian man from Winnipeg befriended us on the plane and helped us translate to get a cab etc. Mumbai was super hot and dirty. Everyone stared at us, particularly me. Talk about culture shock, though it may be that they are simple blinded by our pastiness. We hired a guide to take us around the city, including Gandhi’s house, then went to Elephanta island where temples are carved right into the mountain. Looked a lot like the dwarf home in Lord of the Rings. There are a lot of Indian tourists but very few white people. We are a bigger attraction than the heritage sights.  Seriously.  Everyone wants are picture.  We tried to be wary of scams. ‘Holy men’ wrapped our wrists with colourful string and dotted our foreheads with paint and then proceeded to charge us 200 rupees. Crossing the street in India is like playing dodgeball.  With cars, buses, rickshaws, motorcycles and bikes.

In order to escape the crazy muggy dirtiness of Mumbai we hopped on a ferry to Mandwa. We had no idea where that was but it wasn’t Mumbai. An hour or so later we arrived. We came across an American architect who lived there and recommended we take a rickshaw the Kashid. Sure why not? So off we went and  an hour or so later arrived at the beach. We stayed in the village that night. When eating we walk up to an establishment and say food? Veg? Then somebody runs to find a translator. We keep repeating food? Veg? Decide on a price. They make us something delicious. In this case, 2 huge dinners, 2 chais and a club soda came to 150 rupees. 3 dollars. We tip well. The next day we just started walking down the road. In the middle of nowhere. In India. Had breakfast the same way. Lots of people waved, nobody stopped. After a long time in the sweltering heat we flagged a bus. It was rackity and very full. Imagine a bus circa world war two, rackity doesn’t begin to describe it. We made 6 friends on the bus. College kids plus their 12 year old cousin from Mumbai. All studying commerce, wanting to get in on the ‘share market.’ They took us around Murud, to Janjira fort which is a huge fort in the middle of the water about 600 years old. On the way back the boat (which resembled the boat Jack Sparrow arrives on in the first pirates movie but with about 50 people on it) mysteriously found out I could sing and pressured me into singing. I sang 2 verses of Somewhere Over the Rainbow. They asked if I knew any Hindi songs. Again, we were a bigger attraction than the Fort. Our friends took as too lunch and treated us royally. Apparently friends do not thank friends in India. We told them it’s the Canadian way and thanked them at every turn. They found us a bus headed for Roha so we headed there to catch a train. 2 ½ hours later we were there but had to wait 3 hours (Indian trains are notoriously late). This time the  attention we attracted was very unwanted. Keegan and I have decided we are married from here on out. The term “girlfriend” doesn’t seem to translate nor deter their leery glances. Not glances, full on glares. We did make one friend however. Rewan Powar. An intelligent, unassuming man who invited us to stay at his home in Ratnagiri. A 6 hour train ride cost us 38 rupees (45 cents). Rewan and Keegan talked for much of it. He was a veterinarian but due to lack of work became a bank manager.  We arrived at 130am. Rewan’s wife and child were visiting family and he insisted we take his bed and he slept on the floor. In the morning he was watching the X games (skiing!) He showed us pictures of his family and took us for breakfast at his friend’s restaurant who wouldn’t accept money. Indian hospitality is unparralled. If you are a guest, you don’t pay for anything.
We then took a train to Thivim, and a rickshaw to Anjuna, which apparently is tourist central. More white people than we’ve seen the whole trip. Mostly Europeans and hippies. I can finally show skin! (I’ve been wearing long pants thus far.) There are no big resorts here but plenty of guest houses and beach bars. I am currently sitting on a pile of cushions in a treefort on the beach.  Could not be more different than the gawking of the late night train ride. Time to check out the market. I need hippy pants!
*A note for Brian (because I know you’re likely the only one besides my mother that read this whole post): don’t ever go to India. You will never leave. There is too much too see/try to comprehend/never understand. The contrasts. The colours. The culture.