BCCPAC’s president, Kim Howland told a press conference today that, “BCCPAC members strongly agree that there was no crisis in public education until teachers went on strike. ” She said that because BC’s students continue to score highly on international tests, get into prestigious universities and graduate in increasing numbers, there is clearly no other crisis.

Moreover, she said, teachers are striking illegally and defying court orders; they should get back to work post-haste.The government’s responsiblity is to provide adequate resources for funding.

She reiterated BCCPAC’s opposition to class sizes being a part of the teachers’ contract.

A parent from Coquitlam said there has been violence against a teacher who does not support the strike; when pressed, however, he could give no details.

A student said because of the strike, she is missing her chance to apply to Harvard, Acadia, Oxford and Cambridge because she doesn’t have marks to submit.

Reporters asked the group some tough questions. Mike Bothwell (Citytv) said that although BCCPAC says it’s not choosing sides in this fight, Howland’s press release (not distributed to parents) echoed all the government’s main
points. Howland denied this.

Another reporter asked what BCCPAC has been doing for the past three years about growing class sizes and underfunding . Howland said the group has been “talking” about it to the government. I think it was this same reporter who suggested that her group seems to have been unsuccessful in persuading the government to give enough resources for, say, smaller classes. Howland said there is “no data” on the effects of underfunding.

Bothwell asked whether BCCPAC has been polling parents to find out their views. Howland said no, but she’s in “constant communication” with parents.

Howland said 40% of BCCPAC’s budget comes from the provincial government, but the rest rest comes from memberships.

As most of you can tell, there were some unfortunate errors and omissions in today’s press conference. The number of resolutions passed at BCCPAC AGMs urging the government to adequately fund education suggests that parents perceive a worsening financial crisis in education. BCCPAC laments the lack of “hard data” showing the effects of underfunding, but had it acted on a resolution passed in 2003 to track deficits in resources, it would now have two years of data on hand.

As to the funding of BCCPAC, the last Annual Report posted on its website says that 8%–not 60%–comes from membership fees. The Ministry of Education provides the larges chunk of funding (63%) as core and project-based funding. See Annual Report 2004 for details.

More than 500 people rallied on the steps of the Scarfe Building/Faculty of Education UBC at noon today in a show of support for BC’s public school teachers. Speakers from student, faculty, staff unions spoke out in support of the teachers. Vancouver teacher, Paul Orlowski, echoed many speakers when he called attention to the vested interest of Campbell and his business buddies. Teachers are standing up for a civil society in which opposition to an unjust law is a just action, Orlowski commented. The leaders of the three UBC CUPE locals spoke strongly in support of the teachers. They reminded the university that there are over 5,000 CUPE workers at UBC.

Even while negotiations are taking place, the premier’s office still sends out a blame the teachers message. The question is, is trust possible?
Charles 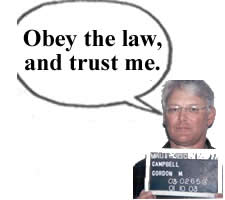 Thank you for your email regarding the teachers’ dispute. . . . > 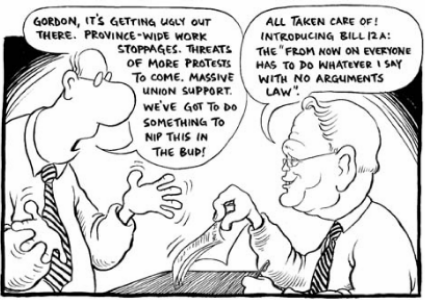 Thank you for your email regarding the teachers’ dispute.

Last month, a fact-finder appointed to identify issues hindering negotiations determined that no reasonable possibility of a negotiated settlement exists. After eighteen months at the table and thirty-five
meetings, the British Columbia Teachers’ Federation (BCTF) and the British Columbia Public School Employers’ Association (BCPSEA) did not agree on a single item. In light of this, our government introduced the Teachers’ Collective Agreement Act. This Act extends teachers’ existing contract until June 30, 2006, at which time teachers will be able to seek a wage increase.

This will also give our government the opportunity to review teacher bargaining in British Columbia. The current bargaining model between the BCTF and BCPSEA has never resulted in a negotiated contract. Clearly, this is a dysfunctional structure in serious need of repair. We have appointed veteran mediator Vince Ready to lead an Industrial Inquiry Commission to recommend a new process for reaching collective agreements with teachers before bargaining resumes. The Wright Report, released in December 2004, provides a starting point for careful examination of this issue.

Pursuant to the Supreme Court of British Columbia’s ruling, we are imploring teachers to cease their illegal strike and return to their classrooms. We are willing to meet with union representatives to find solutions; however, we cannot do so as long as teachers remain in contempt of court. We are also urging the BCTF to accept our invitation to the Learning Roundtable, where all participants will have an opportunity to discuss class size, class composition, and other crucial issues related to learning conditions.

Our government supports teachers and remains unequivocally committed to providing students with the best possible public education. We have added $150 million this year to the education budget, which increases total education funding to more than $5 billion for the first time in our province’s history. We are interested in hearing teachers’ ideas on how to further improve our education system, and to this end, we are establishing a Teachers’ Congress to allow teachers to communicate directly with the provincial government.

Again, thank you for sharing your views with me on this important issue. Please visit www.mediaroom.gov.bc.ca/teacher_negotiations for the latest information.