A story in the NYT, which uses great graphics (another post, another important topic), describes how the author used Oliver Twist as a walking tour guide to London.

It was nearly eleven o’clock when they reached the turnpike at Islington. They crossed from the Angel into St. John’s Road; struck down the small street which terminates at Sadler’s Wells Theatre; through Exmouth Street and Coppice Row; down the little court by the side of the workhouse; across the classic ground which once bore the name of Hockley-in-the-Hole; thence into Little Saffron Hill; and so into Saffron Hill the Great: along which the Dodger scudded at a rapid pace, directing Oliver to follow close at his heels. 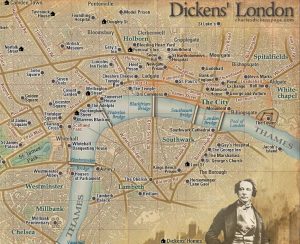 The inference here is that literature, fiction that is, can be a guide to what we might think of as the “real world.” And in this short discourse, the author illustrates what he sees as the substantial over lap between the contemporary streets of London and the days when and where Dicken’s Oliver Twist descended into gang life.

There are plenty of instances of people looking for places and things described in literature… Platform 9 3/4 in King’s Cross Station, for example.

Umberto Eco also takes up this idea in Six Walks in the Fictional Woods, but comes to a slightly different conclusion… with the descriptions of the streets of Paris in Dumas’ Three Musketeers. Eco takes his reader along as he shadows D’Artagnan through the streets of seventeenth-century Paris, but Dumas fools us and we cannot quite follow the trail, not because the streets are not there but because the trail doesn’t make physical, logical sense.

In both instances, whether the mapping is “accurate” or not, the idea or possibility of mapping reveals the uncertain boundary between story and history, between fiction and nonfiction. Fiction is dependent on reality (even fiction that seems most unreal); but reality, too, depends on fiction. What connects fiction and nonfiction is the underlying idea of story. Whether we are writing/reading the stories created by others for us or we are telling/listening to stories of friends, family, research participants’ lives we are making sense of the world through narrative, through story.