We tell ourselves stories in order to live. ~ Joan Didion 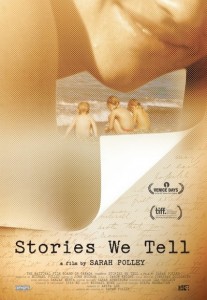 Sarah Polley’s film Stories We Tell is about her mother Diane Polley, or so it seems initially. It is much more than that though. It is an artful alternately weaving and unravelling of narratives of those who share experiences, but, of course, tell their own stories of those experiences. The story unfolds at one level as the story of Diane Polley, a notable Canadian actor (with a daughter who is now both notable actor and director), although the story is more about her personal than professional life. Polley asks each storyteller to “tell the story from the beginning” and she privileges each in the unfolding story that ultimately revolves around the family “joke” that Sarah does not look like anyone else in the family. Individual stories layer and turn back on themselves as that family story becomes a story of its own when Sarah finds out that the man she thought was her biological father is not.

Interviews of siblings, friends, spouses, lovers, and children in Stories We Tell are amazingly intimate and artful illustrations of poignant in-depth interviewing based on difficult questions. The movie is family talking to each other. Everyone misses Diane, and each suffers her loss deeply since she died of cancer when Sarah Polley was 11. The answers offered aren’t simple, and Polley’s own movie narrative reveals the twists and turns in her own story, which is more what the film is about. Some reviewers have called it a love letter to her parents. There are fleeting senses from time to time that the story is told, but then it isn’t and by the time the film ends it is clear there is no end to the story. Ever.