Mad women? from Attica to Attic

The title for this brief post is a bit cryptic and inspired by my reaction to Gilman’s The Yellow Wallpaper and the way in which this story appears to continue a literary tradition of connecting strong females with madness, one of the earliest and most obvious examples being Medea. Gilman’s narrator is not, strictly speaking, confined to an Attic, a virtual convention of the gothic story. But her imprisonment in a upstairs Nursery establishes a strong connection to Rochester’s “mad” wife in Charlotte Bronte’s Jane Eyre, itself a remote echo of Medea. What is one to do with a nonconforming woman? Send her into exile, or lock her up?

Medea kills her children, and Gilman’s narrator cannot establish a bond with her child. At first glance, the cliche of the unnatural, monstrous female seems safely established. Yet neither Euripides or Gilman conform to so much as challenge this stereotype. While the narrator and Medea are strong willed, nonconformist, socially isolated, and drift progressively deeper into seeming madness, is it these characters that are mad and monstrous, or the worlds they inhabit? John and Jason, it seems, have a lot in common.

Unreal City: Is the Waste Land a place?

To what extent is the Waste Land spatial, historical, and real? London strikes me as an “Unreal City” in a couple of (possibly) useful ways for coming at the poem. The City of London is actually only slightly bigger than one square mile and refers to an originally Roman settlement that is now only a tiny core at the heart of a massive metropolis. It still remains an administrative and peculiar place, with a Lord Mayor of London who is NOT the mayor of London. Eliot’s London — and despite being an American he sees it at his London — is well established as the leading hub of global finance, a role it continues today. The “City” also functions as a metonym (thanks Kevin for defining this) for the UK’s financial district, a usage clearly employed by Eliot. Today, only about 7,000 people live in the City, but close to half a million people work there, swelling its population by day, streaming home to the suburbs by night. Eliot captures this phenomenon in the poem, likening the daily pilgrimage to work and back as a living death by connecting it to Dante’s Inferno: “I had not thought death had undone so many.” The litany of actual London locations, most of them in or near the City, places the poem, in one sense, in a real place. But Eliot is clearly trading on the non-spatial, unreal, surreal notion of the  City as well, a place “populated” by soul-less bankers in bowler hats, some of them “Bradford millionaires” — outsiders and upstarts.

London may also be unreal in the sense that it is destined to be only the latest in a series of fallen towers referenced, directly or obliquely, in the poem: Carthage, Babylon, Jerusalem, Athens, Alexandria, Vienna… all have had their day. Fleeting, ephemeral, “stony rubbish,” a “heap of broken images” — a fate that figuratively, even literally, await all great civilizations. But where is Rome it might be asked? I would suggest that London is Rome, or rather its “surviving” modern outpost, physically alive (“a human engine”) but spiritually dead…. “but there is no water.” “London bridge is falling down, falling down, falling down,” taking with it a sea of humanity. The waste land then is a place, in time and space, but also, and more importantly, a spiritual condition universalized by articulating it in the context of civilizations past, and the great City of London present, itself a collection of civilizational layers and fragments. 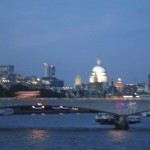 So why should April be the “cruellest month”? Anybody with a vaguely Christian background or knowledge will associate April with Easter… renewal, regeneration, rebirth, salvation, God, meaningfulness and certainty after a long frozen winter of doubt and dread. In places like Ontario (with real winters) the allusion to spring and the burial of the dead is clearer. You can’t did a grave in frozen ground. No wonder T. S. Eliot is an anagram of toilets: that’s where all hope stands ready to be flushed!

So what’s going on here? The mood of the poem is decidedly downbeat. Even if we don’t have a clue what Eliot’s trying to say, the disenchantment of the world is palpable. Blame it on Nietzsche? The “death of God” thing seems to have sent Eliot in a despairing direction. No God? No good then? No meaning? Just “fragments” of earlier illusory certainties… the false promises of the Torah’s commandments, Plato’s forms, or Hobbes’s natural laws. This at least is something says Eliot: fragments to be “shored against” his ruin. OK, well at least we still have sex! Not so fast… there’s nothing meaningful or fun going on there either. Consider the typist’s ho hum reaction to a lunch-time quickie with the “young man carbuncular.”

Begin by asking yourself why Eliot regards his world as a waste land when it contains so many of the features of our own. Or is ours a waste land too?