I couldn’t help but laugh when I heard that a new Japanese anime called Love Kome: We Love Rice was airing in Japan. The title is a pun on the Japanese term for rice (kome) and “love comedy,” and here is a synopsis:

“The anime project anthropomorphizes rice (kome in Japanese) into schoolboys. At the Kokuritsu Inaho Academy (“Rice Ear Academy,” a wordplay on national schools), five new rice-inspired students attempt to supplant bread as the popular grain at the school. The new students form the “Love Rice” unit and challenge themselves to perform at the “Harvest Show” to show the delicious appeal of rice grains. The “heartwarming ‘kome’dy with laughs and passion” promises to let audiences rediscover the virtues of rice (“Japan’s soul food”)” (from MyAnimeList)

Looking a little deeper, the characters and settings hint that the anime creators may have really done their homework.

First, the characters in Love Kome are named after actual varieties of rice that would be well-known among people in Japan. In North America, people might be familiar with white rice, brown rice, or Jasmine rice, but in Japan, people often speak of finer differences between strains of white rice. Some rice strains represent a brand of the region where it is grown – such as Akita Komachi from Akita prefecture – and each of these rice strains have differences in taste, texture, and quality.

I grew up knowing Koshihikari rice as top quality, and sure enough, in Episode 1 of the anime, all the “rice” schoolboys attending the Kokuritsu Inaho Academy revere Koshihikari as their “senpai” (respectful way to call a senior) and strive to become like Koshihikari. Generation-wise, the Koshihikari variety is also a parent strain to four of the five main characters in Love Kome – Hinohikari, Hitomebore, Akitakomachi, and Nikomaru – as all of these rice varieties were cultivated from cross-breeding Koshihikari with other rice strains.

Perhaps the anime will be a battle of the new generation Koshihikari cross-breed descendants, but it leaves one odd one out: Sasanishiki. To Sasanishiki, Koshihikari is more like an uncle (see the rice strain lineage diagram here *in Japanese), as well as a rival since Sasanishiki and Koshihikari used to be the top two varieties dominating rice crop areas in Japan. The rivalry ended in 1993 when Sasanishiki crops were hit severely by an extreme cold year and was replaced by hardier varieties such as Hitomebore (more on the history of Sasanishiki is explained here *in Japanese). Maybe Sasanishiki’s old days in the spotlight explains the official Love Kome character synopsis (*in Japanese) that describes Sasanishiki as: prideful, confident and stubborn […, and] tends to make condescending expressions that he has trouble making friends. It’s pleasantly surprising if creators had really thought this out to incorporate the history of rice strains.

At the end of the first four-minute episode, Love Kome introduces a rice croquette recipe, demonstrating that rice is not only about having a bowl of plain white rice. When bread and pasta continue to be popular in Japan, I would like to see how the anime tries to make rice the main staple food in Japan again.

I’m not a wine connoisseur, but through visits to various vineyards this spring, I not only took home delicious new wine varieties but also caught a glimpse of the intricate choices in wine making that shape our wines.

With a tasting menu in hand, I awaited the winery staff to ask the exciting question: “Which wine would you like to try?” 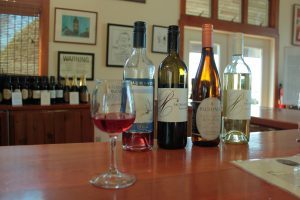 I would usually reach for the classic white wines and red wines, but deferring to the wineries’ recommended specialties, I was pleasantly surprised by their varieties of ice wines, fruit wines, and rosés.

Since a rosé was not on my radar much before then, I asked, “What makes a rosé wine?” One casual question led to another, and in the developing discussion with the winery experts, the wine making process became much more imaginable.

Comparing different flavors of wine is also comparing wine makers’ careful choices in the wine making process and our tastes. The science behind delicious wine is better learned with tastings, isn’t it?
I welcome stories about everyone’s favorite wine tastings!

A silent alarm that emits a stinging smell of wasabi may be life-saving for the hard of hearing.

You might be familiar with the green horseradish paste that comes with sushi: wasabi. Scientists in Japan used the pungent smell of wasabi as an alarm to alert people of a fire. This idea seems incredible, but it was motivated by efforts to create an alarm system effective for people with hearing difficulties.

Japan’s news station NHK reported the progress of this project that has started to produce hopeful results as early as 2008 (for Japanese readers, here is the original NHK article). A mix of wasabi and other mints create a bitter and stinging smell that stimulates the mucous membrane within the nose. This smell is collected into a pressurized can. When the fire alarm bell rings, the machine detects the sound and relays an electric signal to trigger the release of the smell. END_OF_DOCUMENT_TOKEN_TO_BE_REPLACED

Mussels may be familiar to us on our dinner plates, steamed in butter and white wine sauce. In New York, it has become a city project  to study a related type of mussel called the ribbed mussel (Geukensia demissa) in Long Island Sound. These mussels are the focus of a developing technology called “bioextraction” that might help clean up coastal waters.

Ribbed mussels have some fascinating facts – they grow their shells in an annual cycle, so like counting tree rings, we can determine the age of a ribbed mussel by END_OF_DOCUMENT_TOKEN_TO_BE_REPLACED

Here are some numbers for how much energy we spend for making ourselves warm or cool in the changing weather. National Geographic says 47% of the world’s energy is spent on heating, way more than transportation at 27%. If you consider just your home, the number goes up to 60%, says HRAI Canada. Are we supposed to get rid of this energy use completely?—that sounds a bit too drastic for me who cuddles in front of the heater every day these winter days. Still, a lifestyle without any heating or air conditioning existed much closer to home than I thought.

This story takes place in a tea ceremony house in Kyoto, Japan. END_OF_DOCUMENT_TOKEN_TO_BE_REPLACED

This spring, I was asked to teach a Grade Four class how to show respect for the environment. To get them thinking from a new perspective, I brought up a story from the First Nations people about their tradition called “K’aaw K’iihl”. When the Skidegate community in Haida Gwaii attend a feast, they all bring their own containers to bring food back home. The host even cooks extra to ensure their guests have enough to take away at the end of the feast.

I would usually not expect to bring food back from a party, and would definitely not bring a container with intent to collect the leftovers. At the same time, thinking of the leftover food going to waste, disposable plates and cups filling the garbage can or landfills and polluting the environment, or thinking of the energy used to get rid of them–I can sure start to understand the benefits of K’aaw K’iihl.

How much do you think of water as a “precious resource”? Of course I appreciate water after a long, hot day on my first sip to quench my thirst. But we hear much stronger calls to “conserve water.” Water is so easily available at home, there’s tons of water in the ocean and lakes, it even rains all the time in Vancouver! So why do we need to conserve water?

Think of how much of the water we see can be labeled “drinking water.” To obtain water appropriate for drinking or washing, the water needs to go through treatment plants that purify water. Once used, the waste water going down the drain is then processed in waste plants, returned to the environment, and entered into natural water cycles that makes water available again. This means that if we use up water faster than nature can replenish, we’re continuously draining our water resource, energy and money.

And this is what is happening with our current lifestyle. Lots of water use depletes the “clean” water we have, while adding more work to the wastewater plants and nature to recycle the water into something usable for us. The impact dirty wastewater has on our water and wildlife opens up a whole new door of problems as well.

So how can we help? Mr. Water in this humorous video shows very well where we find water in our daily lives and provides hints to “squeeze more from every drop” to help conserve water. Next time I walk to the sink, I’ll see if I can pour more into our human-water “relationship.”