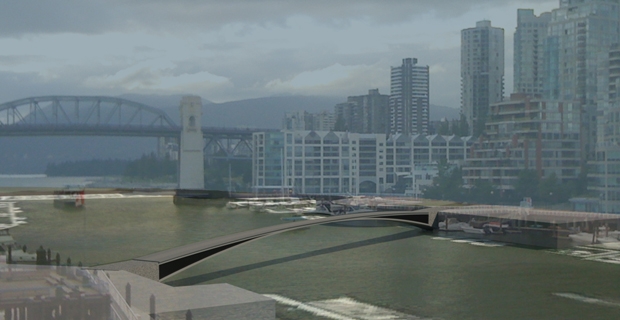 ROBObridge is a speculative response to the contested water crossing: a robotic bridge.

In many cases, moveable bridges are not prefered by government because they need to be manually operated by an operator, which is costly. The robotic bridge uses integrated intelligence within the bridge to operate itself. Sensors within the area of the bridge identify the demand for marine and pedestrian/bicyclist traffic in real time with LIDAR and multiple motion sensors. The bridge control system applies naval traffic rules as well as checks speeds of approaching marine traffic to determine at what distance from the ship that the bridge needs to open, what amount it needs to open and it tracks the ship in real time to determine when it has passed and can then close. 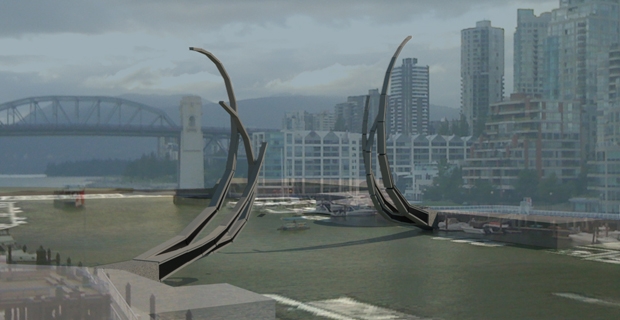 The bridge movement is a hydraulic system. The bridge is segmented into parts which open by curling, each segment moving individually. In its open form it creates an ever changing sculpture: the control system has non-deterministic programming which means that every time it opens, it produces a different opening pattern and configuration. The regular observer of the bridge will encounter a different bridge behaviour every opening.

This solution mediates contested public space similar to a complex traffic light and it also improves efficiency and economy of the system in that it doesn’t require manning. In these two ways it is similar to other applications of control systems in infrastructure. Control systems in public infrastructure are ubiquitous in our environment and are currently used for two reasons:  to increase safety and economy through use of an automated system (such as an automated light rail system) and to mediate contested public space (such as a traffic signals) – usually between multiple modes of travel or multiple streams of travel. In time the control systems and input for these systems will be improved to better communicate between different users of a system and the infrastructure will respond seamlessly to demand from different travel streams such as bicyclists, pedestrians, automobiles and light rail – such as those suggestions which have been proposed by the MIT Media Lab for infrastructure as it communicates with the automobile or pedestrians.