Most of us would know about the twelve horoscopes; one’s horoscope depends on your birth date and the horoscopes rotate on a monthly basis. Similarly, the Chinese culture has twelve zodiacs (known as Sheng Xiao), and one’s zodiac depends on the year in which one is born. You might have heard that this year is the year of the monkey. What’s the deal about that?

The Chinese zodiacs are based on a twelve-year cycle, where each year relates to one of the animal signs: rat, ox, tiger, rabbit, dragon, snake, horse, sheep, monkey, rooster, dog, pig. At the end of twelve years, the cycle restarts. The Chinese 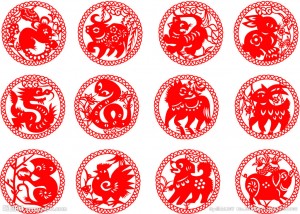 New Year is based on the lunar calendar, which means that the year begins not on January 1, but sometime between January and February. Each zodiac sign has a fixed element, one of metal, wood, water, fire, or earth. Each year is also associated with a specific element. The combination of the year’s element and the zodiac sign’s fixed element has been said to influence an individual’s personality or even fortune.

There are different stories behind how the zodiac animals came about, with the most popular and mythical one being The Great Race. An ancient folk story describes the origin of the Chinese zodiacs to be a race ordered by the Jade Emperor. The Emperor promised that the years on the calendar would be named after each animal in the order that they arrive the destination. How did the rat end up being first? It was said that the rat, knowing its own ability, jumped on the ox’s back to cross the river. When they were very close to the finish point, the rat then jumped ahead and became the first to arrive.

The Chinese zodiacs are very significant symbols in the Chinese culture. Not only because of the beliefs that they influence an individual’s life, but also because they relate to multiple elements of Chinese astrology and philosophy. It gets way more complicated than the facts and story above!

Want to know what your Chinese zodiac is? Check out this link: http://www.chinesezodiac.com/calculator.php

For Residents of Gage