Thanks to a cute little birdie and his tweet, we’ve stumbled upon some EPIC FORESHADOWING.
This post was written back when the Executive was a little sexier and included this resolution for 2010 2008:

At EAT CAKE, we– and by we I mean I, but we sounds so much cooler– solemnly resolve to never stop making fun of people who treat the AMS like it was the United Nations.

Lots of love to this fellow unicorn lover, and take in the hilarity.

Before Council completely overshadows the outdated UN Debacle with its scintillating debate of whether or not to reallocate $1,000 for slam poetry at the Student Leadership Conference, we thought we’d show some love.

MAN OF THE HOUR #1: Edward Pullman, UVSS Director of Finance Although some may question our commitment to the democratic process for this, we’d just like to point out that it takes balls the size of truck tires to ask students in Victoria to support a shitshow in Vancouver.  Plus, look at those puppy dog eyes.  Has Finance ever been this cute at the AMS?

MAN OF THE HOUR #2: Hillson Tse, Former Senator and Shit-Disturber 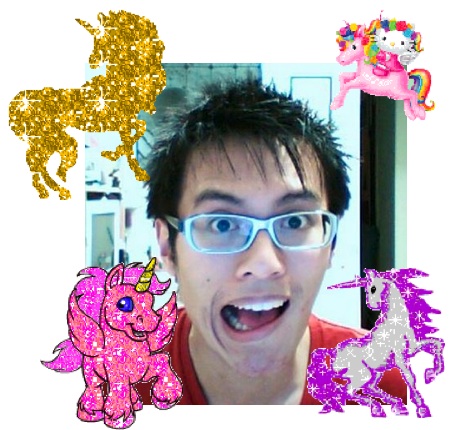 Not only is his entire Facebook full of photos like this, he’s also the creator of the Impeach the AMS Pres & VPX Group on aforementioned social network.  Politically active? check.  Witty, articulate, and snarky? check.  Roster of amazing eyebrow-based expressions? check. Oh, and he does ballroom dancing and likes puppies.  Be still my heart.