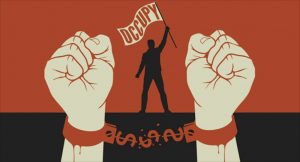 Globalization has become a catchword describing the attributes of our increasingly integrated world. It is glorified in tech and social media circles; vilified by progressive social movement activists, and assumed as reality in the business and government worlds. But what is globalization? Is it really a new social phenomena? What are its ill effects? What are its benefits?  This course explores the idea of globalization as a phenomenon of the capitalist world economy. We will examine how theories of Imperialism and Revolution, as articulated by engaged theorists, such as Rosa Luxemburg and Leon Trotsky, shed analytic light on the contemporary idea of globalization.  We will examine how anthropological insights can be used to shape these social and economic forces to make our world a collectively better place  Revolutions require work, theory, practice, and commitment. The capitalist class knows this and constantly works to maintain their power and authority. Working class people, historically marginalized peoples, oppressed nationalities are often locked in a simple struggle to survive and revolution can be seen, if it is seen at all, as more trouble than it’s worth. Yet overturning the rule of capital is very likely the single most important task in front of us today. Understanding how imperialism masks itself in theory, coercion, and subterfuge is an important step on the path to liberty.

Tsing. The Mushroom at the End of the World.