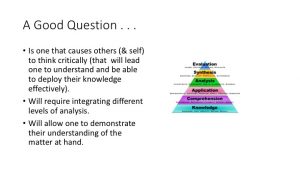 The idea here is that if one can generate a ‘good question’ from ones readings, listening to lecture or podcast, or watching video, one is well on the way toward effective learning.  If one is able to pose a question, a question that engages with the material at hand, that integrates it across domains of thought, then one is really moving forward with understanding and being able to use the knowledge one gains.

The good question exercise is one I often use in teaching. But more than that, it is an approach to learning and research that I use myself.

I try first to understand a piece of writing, say on a subject that is new to me or one that I might have a divergent perspective from the author. I am a strong believer in the efficacy of comprehension before critique.   It is so easy to create a shopping list of all the things wrong with something I disagree with.  It is more intellectually challenging to try and understand the logic, perspective, data, and argument of an author first. It will ultimately make any critique (positive or negative) more effective and nuanced in the long run. In my blog post ‘What does the prof want?‘ I discuss this approach in a bit more detail with an eye toward effective study technique.

Here is a standard set of instructions that I often use as the basis of a group activity in a class. 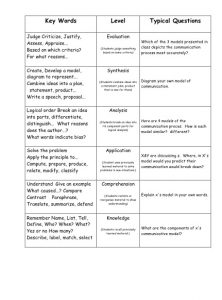 Whether used as a group activity, or an individual learning technique, the idea behind the good question draws upon a variation of Bloom’s Taxonomy. This is a kind of hierarchy of learning and knowledge. Imagine that the first step is simple memory and recall. Then we start to build comprehension. We apply our knowledge in some way. From there we start to analysis novel situations with our knowledge, link it together synthetically with other types of knowledge and then finally are able to evaluate (or critique our knowledge).

The good question approach is based on an idea of active learning – go beyond memory work- integrate the knowledge into one’s one understanding and make use of it. Doing it this way is one effective way to become a more proficient learner and ultimately a better researcher.

When my own sons were young my partner gave me a copy of Patrimony by Philip Roth for father’s day. A little while later I came across an unexpected book by ecological anthropologist Ben Orlove, In my Father’s Study. These are books that have stayed with me.

The first is a tale of a son’s journey with a father at the end of his life.

The second is a story of a son coming to learn about his father, to come to an adult appreciation of him, after the father’s death.  It’s a touching memoire.  I’ve used it a few times in my teaching but my 20/30-something students respond to it rather differently than I. For them it is simply one more book on a reading list while for me it led me to think about my life as a father and as a son.

I’ve spent a great many hours with my own father. As a child following him around as he worked on his fishing boat. As a young adult working with him on the same boat. And later in life visiting with him, keeping each other company sometimes talking about the past, often about his health, and occasionally about my own work. Coming across Orlove’s book, almost by accident, has led me to gather over the decades an eclectic little library of books reflecting upon fathers and sons. Here, in sense of order, is a selection of my favourites.

There are more – but this is more than enough for a start.

Grades are a ranking system. Grades do not measure some empirical achievement; there are a relative achievement determined by a judge (with whom all judged take issue with). Grades are an imperfect measure of learning. They capture some of what one learns. They often leave out more.

Educational ideology, from the right to the left, considers assessment at some level to be a criteria referenced, neutral process. The rhetoric exhorts each and every graded one to do more. The sentiment is that with just the right combination of grit, perseverance, hard work and skill, you too can get the A.

Grades, however, do not measure excellence. They allocate resources. They divide. They are what makes this world of the student every bit as real as the world of work for pay. Grades work against cooperation; they undermine solidarity. They pit one student against the other as grades are a limited resource and one person’s gain means someone else’s loss. Immediately upon handing out a sheet of grades each honest instructor knows in their heart of heart that the honeymoon is over. We can read it in the recipients very body language.

So what’s the point of bringing it up? We all know this truth in one way or another?  Grades are a definitive statement of the underlying structural relationship that guides human interactions for at least the past two hundred years wherein market mechanisms have driven valuations of individual worth and resource allocation. The point of bring up grades us that as long as one labours under the misconception that grades measure some innate ability of something that is theoretical obtainable by everyone most of us will remain unhappy; but more importantly we will remain without the capacity to really do anything about it.

What Can One Do?

I once heard the Canadian singer and television host Tommy Hunter in an interview say “the mechanic down the street is a better musician than I am. The difference is I’m a better businessman.”  Similar things could be said about getting grades. Grades don’t necessarily go to the ‘best’ student, they go to the person who is (in Hunter’s words) the best business person. It’s about figuring out what one needs to do.

Some of us have innate skills.   These skills lead to nowhere without hard work and good timing. They also rely upon figuring out the optimum labour investment to output. There is a nice marxist concept, socially necessary labour time, that I suggest is relevant here.  Put simply, “socially necessary labour time is the amount of labour time performed by a worker of average skill and productivity, working with tools of the average productive potential, to produce a given commodity.” That means a student who invests a maximum effort into a paper shouldn’t expect a maximum grade.  It’s not how much effort one puts in, it is what kind of effort. For some taking more time might produce an average output. For other students a sub-average input might yield a superior output. The quality of the output then (as measured in grades) is not related to the time invested by a student.

It is important to recognize that there are many differnt paths that lead from one’s education. It is as though one is standing at the center of a garden with paths radiating out from in many directions. You are, in this moment, free to choose. Choice is power, but remember some paths are less forgiving than others. What is most important for you as a learner? mastery of a skill, learning something transformative, or accumulating a grade?

Through out my own life I have tended to focus on my learning, not the grade. This has consequences. Faced with an assignment I may not like, appreciate, or value, I would select something differnt, something that would give me a platform to contribute and allow me to exercise my voice. I would advise something similar to learners more intersted in learning than accumulating grades. Put a small piece of yourself into the work, but remember the work is not you, nor is it a measure of you. It is merely something you did one day.

Your task, no matter what you think or feel it is, is not todo a better paper next time. It is to learn, to develop, to explore. The paper is secondary. The mark will be forgotten But, what you take up as yours, what you take as your experience and knowledge will outlast any grade.