Misconduct by the numbers

We need to always treat students with respect, and always remember that the overwhelming majority of students behave with integrity the vast majority of the time.  But we also cannot be naive and need to recognize that academic misconduct can be an issue in some cases. The challenge is to strike the right balance that respects those students who behave with integrity, while supporting those students who might otherwise engage in misconduct to make the right choices.  Taking action to reduce academic misconduct impacts all students, but so does not taking action.

Before discussing strategies for promoting academic integrity on the next pages, a summary of the scale of academic misconduct is provided here.  Data for rates of misconduct in Canada are sparse, and much of the data available comes from the US.  That US data appears to paint a rather grim picture, and suggests academic misconduct is pervasive.  One meta-study [1] on factors related to cheating reveals just how widespread an issue this is, with 70% of students on average engaging in cheating behaviours, divided as shown. 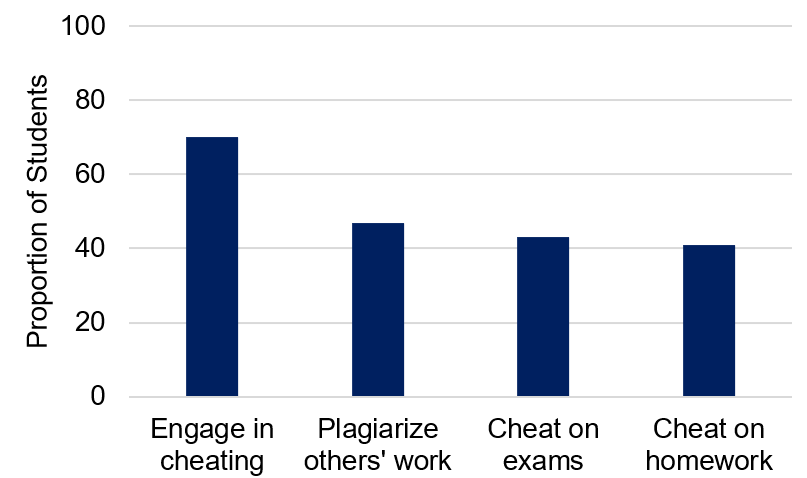 This is consistent with others’ findings.  In summarizing research in academic misconduct spanning 30 years, McCabe, Trevino, and Butterfield [2] reported increases in misconduct over time, and that between 24% and 64% of students engaged in “serious test cheating” and 32% to 66% engaged in “serious cheating on written work.”  From over 71,000 undergraduates surveyed, the International Center for Academic Integrity reports 39% of students admit to cheating on tests and 62% on written assignments (68% in total). [3]  Importantly, this should not be interpreted to mean that, in any given class, over half of the students will cheat on their exams and assignments; rather, it suggests that a large number of students will find themselves in a situation at some point in their degree where engaging in misconduct seems like the better choice at that time.

Comparing online to in-person courses, Watson and Sottile [4] found similar rates of student self-reporting of cheating behaviours in the two modes (33% online and 32% in-person); however, it is not clear from their study whether students took the same number of courses in each mode.  Tellingly, by a four-to-one ratio, in the same study students said they would be more likely to cheat in an online course than an in-person course (42% to 10%). Others, such as Grijalva et al. [5] found no appreciable difference between student-reported propensity to cheat online compared to in person, but they also explain that this may be related to several factors influencing student attitudes including the use of an honour code, reducing pressure during online exams, and designing assessments to thwart cheating (these factors and other strategies are discussed further on the Enhancing Academic Integrity page).  Peled et al. [6] found online learners were less likely to engage in misconduct, which they attributed to a statistically significant higher level of intrinsic motivation possessed by the students in their study who selected online courses.  This raises the question of whether assessment design can enhance intrinsic motivation in students, since now, unlike the case of the study by Peled et al., students are being required to learn online rather than choosing to learn online.

Watson and Sottile’s work also found 5% of students reported being caught for in-person cheating and 2% for online cheating.  (Hutton [6] reports a figure of under 2% overall.)  Hutton also reports that 50% of students do not believe cheating is wrong (suggesting up to the same amount believe it is wrong), and that under 20% would report a classmate who cheated.  There are three important ramifications from these points:

While many of the above numbers are high, there are also important factors to consider.  This data is primarily from the US context, and not specific to programs with an underlying ethical foundation (such as engineering with the Code of Ethics). In addition, this data primarily indicates the past instances or propensity to engage in academic misconduct in general, which is likely much greater than the likelihood for a student to engage in misconduct on any given exam or assessment. Finally, in most of this data, it is unclear what (if any) steps were taken to mitigate potential misconduct; as the next pages show, there are many strategies that can be used to enhance academic integrity.