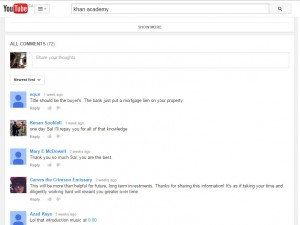 As I mentioned in my CV, I am studying YouTube comments as a research assistant to Eric Meyers. One thing I’ve learned is that YouTube’s comments space does not have many affordances: it lacks easy navigation, it has fewer sorting options, and so on. For this reason, it can be difficult to have a conversation in the YouTube comments. This is something Eric found in his research before I came aboard: there isn’t much discussion in the comments, and what discussion there is tends to be an entrenched argument between two participants. There aren’t many rich conversations.
END_OF_DOCUMENT_TOKEN_TO_BE_REPLACED