“An ounce of chocolate a day, keeps the doctor away”

With the second round of midterms right around the corner, all of us are going to have stressful cravings while studying, and I for one, crave chocolate more than anything. Thank to a recent study, it is shown that chocolate is actually beneficial for our health, if consumed in a reasonable amount.

Ever since cocoa powder was introduced in Europe (sometime in the 1500s), it has been modified and processed into the fancy chocolates that we now consume. For many years, chocolate has been treated merely as a dessert until recently. It was found that chocolate can help improve our health, most importantly our cardiovascular health. Chocolate is rich in flavanols; which are a type of flavonoids that act as an antioxidant. Furthermore, flavanols in the blood stream also allows vascular tissues to relax, helps lower blood pressure, improves blood flow to the brain and heart, and aids in the production of blood platelets (making them less sticky and allowing them to clot). It has also been suggested that it might cure diseases such as dementia.

But wait! Before we reach out for that snickers bar across the table, lets just take a moment to understand that modified, commercial chocolates that are sold in the stores, might not provide the health benefits we need. The strong smell and bitter taste in cocoa is associated with the presence of flavanol. Unfortunately, the chocolates that we consumes have been highly processed to get rid of the flavanol, to make them taste sweet.

Fortunately for us, chocolate manufacturers are working towards preserving flavanols in the chocolate bars. So before we get too excited and rush to the nearest store to buy a box of chocolate, take a breather and read the nutritional labels. Look for chocolates with a high cocoa percentage and low sugar and fat levels. Until then, for those of us watching the calories,  should stick to the safer alternatives of dark chocolate or unsweetened cocoa powder in a moderate amount.

Molecular Gastronomy-the next generation of food 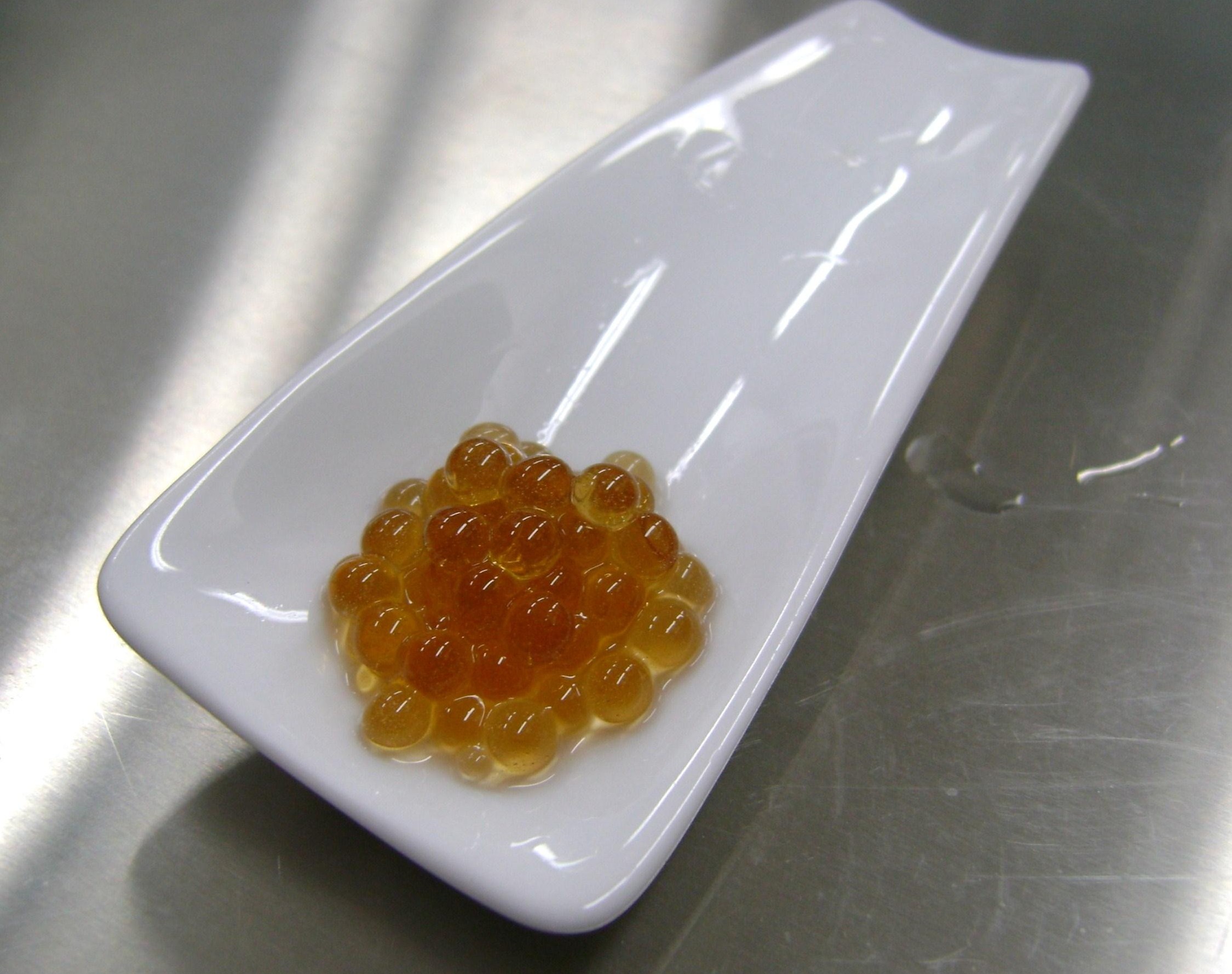 Nowadays, scientific technology is not only applied to analytical laboratories, but also used by some creative chefs. This new method of cooking is called molecular gastronomy, which was named by a French chemist Hervé This, and a Hungarian physicist, Nicholas Kurti in the 1980s. This special discipline investigates the physical and chemical changes of ingredients during cooking, and the chef aims to make the food more artistic, technical and healthier. For example, coke spherification, is a dessert made by coke. Also, Chef Fung, who designed the dish “Steak-tartare” which made by chopped watermelon with a sphere of mango juice and mints said he liked to trick people’s eyes and minds. “Customers may think they know the dish well, but they will be surprised when they taste it”.

Figure 2. Kitchen as a laboratory

The main purpose of developing molecular gastronomy is that scientists (or cooks) can use new ingredients, tools, and innovative methods to produce amazing products. In the ordinary kitchen, cooks use spices and herbs; similarly, in the laboratory, chemists also use fragrant organic chemicals such as 1-octen-3-ol. If you don’t have mushroom when you are cooking, chemists will add some benzyl trans-2-methylbutenoate instead, because it has a taste just like mushroom. Many chemicals can be used to reinforce the taste of our food, or change the texture so that they will become more attractive and artistic. Also, laboratory apparatus is useful in the culinary preparations. For example, cooks can use a reflux column to keep the flavor of ingredients. There are some other cooking techniques including capsule technique, liquid nitrogen, and low temperature cooking. Treating the kitchen as a laboratory is one of the key ideas to succeed in molecular gastronomy.

The video generally introduces the basic and common techniques used in molecular gastronomy. 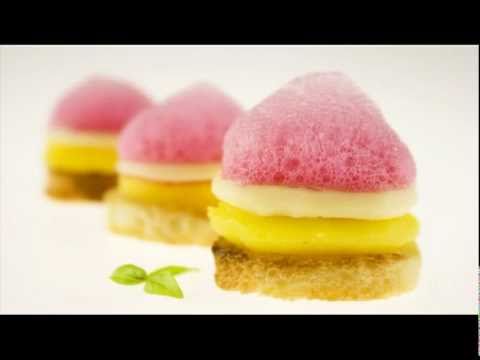 Using molecular gastronomy as a different style of cooking will increase the public’s interest in understanding science, especially chemistry, and inspire people to appreciate their food. Advanced technologies in molecular gastronomy provide more possibilities in culinary art, and people will be more satisfied with tasty and delicate food. Many top chefs around the world are taking the challenge to create fabulous dishes on a molecular level, and with their effort, more people will get to know and try the new way of cooking.

Recently, I came across this acronym, BPA, and thought to myself, “what is BPA?” To my surprise, it turned out to be an industrial chemical I was being exposed to everyday and I didn’t even know! Similar to myself, there are many people in our society who are unaware of the use and exposure of this chemical. Therefore, the purpose of my blog is to familiarize students of Science 300 and our society with what BPA is, its use in industry, and the possible health risks it poses to human health.

Bisphenol A (BPA), is an industrial chemical used to make polycarbonate and epoxy resins which are used in many consumer products.

Chemical Representation of BPA (from http://neuroamer.wordpress.com/page/4/)

Polycarbonate is used in a variety of products because of its unique attributes. It is a light weight, high performance plastic used by industries to make consumer products such as infant bottles.

Epoxy resins are also used in a variety of consumer products, such as paints,  because they maintain the quality of the canned product. Many canned foods and beverages have epoxy resins used as liners to maintain food quality. 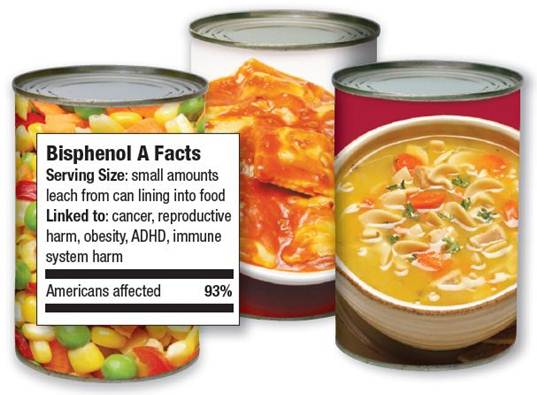 Canned foods contain BPA which leaches out into the product. (from http://inhabitat.com/the-dirty-dozen-guide-reveals-12-hormone-disruptors-other-than-bpa/)

Over the years, BPA has been one of the most extensively researched chemicals.  Safety assessments have concluded that the exposure level to humans “is more than 400 times lower than the safe level of BPA set by the U.S Environmental Protection Agency.” Then why is BPA still a topic of debate?

Many people are still worried about BPA exposure because this chemical mimics the hormone estrogen. It is also widely known to be an endocrine disruptor. Research studies have indicated that the tiniest exposures to the chemical can increase risks for cancer and disrupt the hormone system. Other studies have shown high levels of BPA in urine samples of six year old children.

The question which arises now is, “what has the government done to prevent BPA exposure?” According to an article published in New York Times, Canada has banned the use of BPA for infant bottles. Additionally, many industries are making BPA-free products available to people. Nevertheless, the controversy which still remains is whether or not these substituted chemicals are safe?

The video below further discusses this issue:

In conclusion, there is a lot of debate over the topic of BPA exposure to humans as well as its health consequences. Daily news reports are being published on this issue which keep us updated on what the government is doing in regards to using this chemical in the industry. Furthermore, researchers all over the globe are continuously experimenting with BPA on rodents to provide concrete evidence about the health risks it may cause. As for now, to avoid BPA exposure, consumers should avoid using plastic containers which have recycle codes 3 or 7 on them as they may contain BPA as well as not use plastic bottles for hot liquids.