Posted on September 25, 2015 by Chelsea Cayabyab | Leave a comment

Did you see the bloody moon last Sunday, September 27? If not, then too bad because the next time you see it will be in 18 years!

You may be wondering what exactly this “bloody moon” is and why it is such rare occurrence. Let me get down to the basics.

First of all, a lunar eclipse occurs when the Earth blocks the sunlight reflecting off of the moon’s surface, creating a shadow against the moon and darkening it. There are three types of lunar eclipses (penumbral, partial and total) but for now, we are interested only in a total lunar eclipse when the moon “bleeds” against the dark sky. In actuality, the full moon gets covered completely by the Earth’s shadow, when the moon, Earth and Sun are in perfect alignment. It turns a reddish hue from some light refracted off of Earth’s atmosphere towards the moon.

Even though we have a full moon every month, total lunar eclipses only happen once every 6 months or so. A 5-degree angled orbit of the moon around the Earth makes the occurrence less likely to happen.

On the other hand, a supermoon can be seen when a full moon is at its perigee, or in other words, at the closest point in the moon’s orbit relative to Earth. At this perigee, the moon appears brighter and bigger by 12-14% than a moon at the apogee, a very noticeable change.

Moon size and position at perigee and apogee. (Image taken from skynews.ca)

According to EarthySky.org, the next supermoon will happen in November, 2016 then January, 2018, so roughly every 13 months.

The effect of a total lunar eclipse occurring at the Earth’s perigee is an abnormally large, very photogenic, “super bloodmoon”. The rarity of this cosmic happenstance is roughly once every 18 years. The closest, biggest and reddest supermoon since 1982 occurred in September 27/28 2015. It is visible to North and South America, Europe, Africa, and parts of Asia- in short, we can see it from Canada. Luckily for me, I stepped out of my house that evening to witness the eclipse as it was occurring at around 10 PM PST. No sunglasses needed, and no telescopes either. Just a blanket, a folding chair and some mosquito repellent then I was good to go! For all of you who missed it though and would like to re-watch it, a recording from Griffith Observatory, CA is included here. 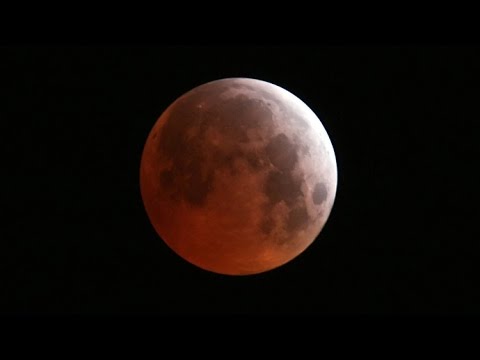 This entry was posted in Science Communication and tagged 2015, blood, moon, rare, Science in the News, supermoon. Bookmark the permalink.