“The Dark Side of the Moon” – What happened to the moon last Sunday?

Last Sunday, half of the world bore witness to a rare event that had not occurred in over 30 years, and will not occur again for more than 15. Two fairly common events coincided on the same night: a lunar eclipse and a “supermoon”.

For  civilizations living centuries before us without technology like telescopes to help explain why, the sight of a lunar eclipse inspired many interesting theories to try to explain the frightening but captivating occurrence. These stories often involved some sort of celestial conflict or consumption of the Moon. Nevertheless, our faithful heavenly body never failed to rise again on the following night.

Progression of the “supermoon eclipse” on September 27, 2015. Source: Peter Martin Jørgensen from flickr.

Today, we know that a lunar eclipse, also eerily known as a “blood moon” for its red colour, happens when the Moon is in the shadow of the Earth. The Moon itself does not generate its own light like the Sun does, but rather, reflects the Sun’s light. During an eclipse, the Earth is between the Sun and the Moon, preventing the Sun from fully illuminating the Moon. The reddish tinge is a result of certain wavelengths of the visible light being scattered by the Earth’s atmosphere, much like why a sunset appears red.

Just like how the Earth’s orbit is not a perfect circle with the Sun exactly in the centre, the Moon’s orbit is elliptical and slightly off centre. This means that at any given point in the Moon’s orbit, the distance between the two bodies varies. When the Moon is at the farthest point from the Earth, it is called the apogee. At this point, the Moon will appear smaller than usual. Conversely, the point at which the Moon is closest to the Earth is called the perigee. Colloquially known as a “supermoon”, the Moon will appear to be larger than usual. Supermoons occur four to six times a year.

Did you miss it? Fear not: here’s a time lapse of the event from the Associated Press. 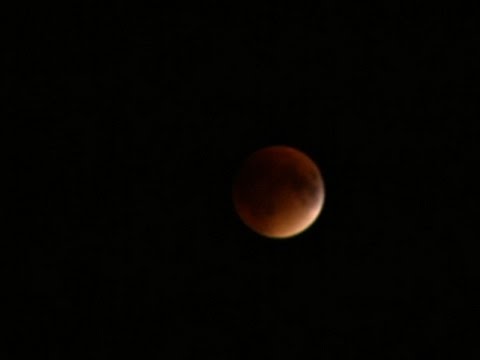 While these celestial events no longer inspire the fear that our ancestors felt, the sense of wonder and awe still remains. The next supermoon eclipse won’t be until the year 2033. Until then, mark your calendars!