The Unique Features of Coral

Corals are eukaryotic animals that have existed for more than 500 million years. They are found in abundance in shallow tropical waters, where sedimentation rates are low, nutrients are scarce, and water temperatures are warm. They also have a wide variation in morphology which allows them to better adapt to the different environments in the ocean. The base of a coral is called the corallite. The corallite is made of calcium carbonate and contains the polyp. The polyp is the softer portion of the coral that surrounds its mouth. The polyp further extends to tentacles that contain cnidocytes. Cnidocytes enclose structures called nematocysts that help the coral capture its prey. Each nematocyst is attached to a thread on one end, and the other end of the thread can be barbed. When a prey is detected, the thread is ejected from the nematocyst to either trap or inject toxin into the prey. The prey will then be devoured in the stomach of the coral and any waste will be expelled back out from the mouth. Corals come in a variety of shapes due to the differences in wave strength and sunlight of their location in the shallow ocean waters. For example, corals that live deeper on the reef tend to be flat to better capture sunlight and food, whereas corals that live closer to the shore branch out so the strong ocean waves don’t break them. Perhaps all these factors combined is what helped corals exist for such a long time. Above all, corals display an interesting symbiotic relationship with a dinoflagellate called zooxanthellae. These zooxanthellae are photosynthetic algae that live in the polyps of corals. One advantage of their relationship is that through photosynthesis, zooxanthellae supply high amounts of oxygen for coral. A second advantage is that zooxanthellae provide as much as 95% of the coral’s energy source.In addition, zooxanthellae help increase calcium concentrations for the corals to use for corallite formation. It was found that corals with zooxanthellae can grow three times faster than corals who don’t have zooxanthellae. In a research done by Pearse and Muscatine, they also found that “corals with symbiotic algae calcify many times faster in light than in darkness, while corals which have lost their zooxanthellae calcify at rates which are slower and unaffected by light”. Pearse and Muscatine also looked at the relationship between the uptake of phosphate by zooxanthellae and growth of corals. It is hypothesized that the uptake of phosphate by the algae can assist calcification in corals. However, the results found under their conditions were not significant, otherwise there would be a fourth advantage to the symbiotic relationship between coral and zooxanthellae. As for zooxanthellae, the coral provides them a place to live, a supply of carbon dioxide to use in photosynthesis, and protection. I believe that these are the unique features of corals that helped them exist since the late Cambrian period. Their symbiotic relationship with zooxanthellae is even more fascinating. Corals and their algae friends are still being researched to find more advantages in their symbiotic relationship. Without these algae, corals certainly have a decreased chance of survival.

Here is a short video on Coral: 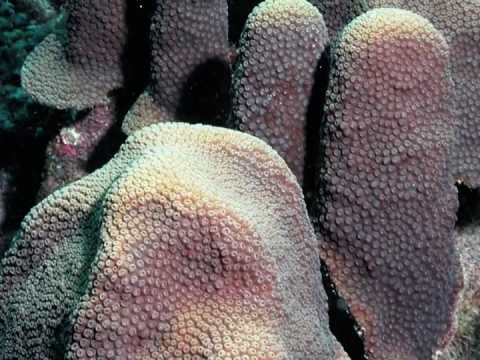