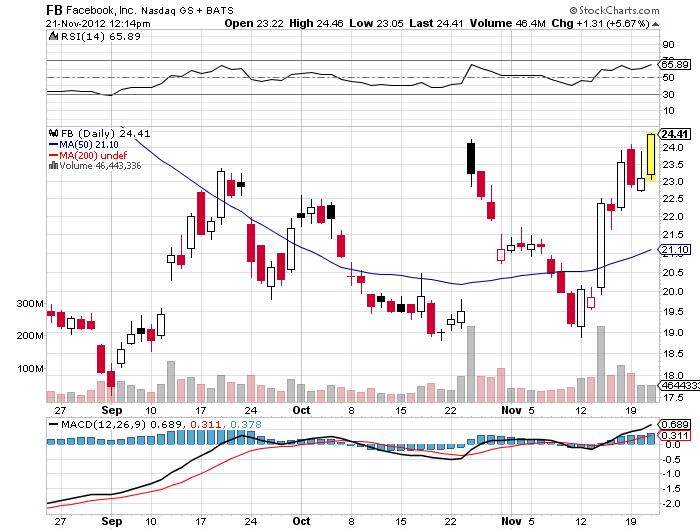 This comparables valuation of Facebook is still being improved. Yesterday I decided to add LinkedIn as a comparable based on their success as an online social & professional giant. While they are less advertising focused and more fee based, the company has similar prospects for growth as Facebook, as like Facebook, it is an online leader of its industry. Please see updated Valuation Model below:

Based off of this model, I now have a price target for Facebook shares of $25.96

I personally have been quite bullish on Facebook (NASDAQ: FB) since it went below $20 earlier this year. The simple fact that the company has over 1 billion users was enough to get me excited. Given this kind of user base, all the company needs to do is figure how to best monetize these users. While Facebook could always just go ahead and charge its users a minimal fee of $5 a year, it seems that for now they have chosen against this route. The company is now building strategic relationships with companies of all types and offering targeted marketing and advertising services. Since Facebook has all sorts of data on its users, this will likely be a very effective effort.

Considering how many pundits have come out with sell ratings on Facebook, I decided to conduct my own analysis utilizing a mulitples valuation approach to attempt to value the firm and its stock price. To do this, I used 3 measures that I felt would be the most accurate method to value the firm: Price to Sales, Price to Cash and Price to Book. I used the mulitples of the five most similar public companies I could think of and then I weighted them according to which company is most similar to Facebook’s business model. See diagram below:

I feel that Google has the most similar business model, utilizing targeted advertising with Zynga coming in second place. Zynga offers online games and makes money from advertising as well. I consider Facebook to be a type of online social game. The others were just weighted at 10% each and include other online business, both retail and social.

Using the weighted aggregates, I then multiplied these values by Facebook’s actual Sales, Book per Share and Cash per share to get the following implied stock prices:

After averaging these values, I obtained an implied stock value of $24.91/share for Facebook. This is substantially higher then the $21.30 that Facebook is currently traded at.

Since the company’s lock up has now expired, many insiders that have previously been unable to sell can now sell their shares. However, considering the stock is up today on large volume, it appears that either the insiders are not selling, or that institutional investors are buying up all shares that are being sold by insiders. Either way, I take this as a strong bullish signal that Facebook might have put its bottom in and has large room to run to the upside.