Please see my article which was posted on Motley Fool and syndicated across the web:

Speculation and its Impact on the Financial Markets
The topic of speculation and whether its effects on the financial markets are positive or negative has been assessed by many notable scholars. In my research I have seen strong arguments both backing speculation as a process by which equilibrium is found in the financial markets, and criticizing it by referring to the speculators as nothing more than gamblers. Although it is unlikely that any true resolution will ever come of this quarrel, my thesis proposes that there is actually a fundamental need for speculation. Nassim Taleb recognizes both sides of the argument in his book, Antifragile: Things that Gain from Disorder, where he states “… [Without] speculators…prices are more stable in general but any fluctuations cause greater panic” (Taleb). This statement identifies the only clear truth which is while speculation does assist in providing liquidity to markets and creating equilibrium, it can also exacerbate and drive volatility.

Background
In Robert Shiller’s book, Finance and the Good Society, Shiller identifies three historic icons who serve as an excellent starting point in our discussion of speculation: Charles Conant (American Journalist, Author and Expert in Banking & Finance), Karl Marx (Legendary German Economist & Sociologist) and John Maynard Keynes (British Economist, Father of the Keynesian Economics and most prominent figure in 20th century Economics). While Marx and Keynes argue that speculation should remain in the casinos as a past time for the wealthy, Conant reflects that “…a function which occupies so important a place in the mechanism of modern business must be a useful part of that mechanism…” (Conant). He goes on to criticize those who think otherwise by stating, “…reflection seems to have little part in the equipment of the assailants of the organized markets.” Shiller suggests that there is both healthy and unhealthy speculation.

Theory
By delving into this a bit deeper, it can be deducted that there are market stabilizing speculators who are generally rational and buy when the markets are low while selling when the markets are high. The other class of speculators is the destabilizers, those who irrationally sell when the market is low and buy when the market is high. The destabilizers would be what Shiller is referring to as the unhealthy speculators as they tend to increase the volatility in the market by driving prices lower when they are already low. The problem with this is that since the destabilizers are constantly trading irrationally and losing money, they will get weeded out of the market after all of their money is gone. Milton Freedman (Nobel Prize winning American Economist and Statistician) put it simply, “People who argue that speculation is generally destabilizing seldom realize that this is largely equivalent to saying that speculators lose money” (Friedman). Not only is this true, but furthermore those that argue that speculation is unhealthy are saying that these destabilizing speculators who lose money are willing to continue to lose money by doing the same thing. This would classify them as insane for doing the same thing many times over and expecting different results. In short, the unhealthy speculators will arise as new irrational entrants to the market and then they will leave after losing too much money, going bankrupt or they will evolve into healthy speculators. This theory supports my thesis that in the end, speculation is a healthy and stabilizing force for the financial markets.

Conclusion
One difference that I have noticed between the two distinct schools of thought on this topic relates to the transformation in the markets that has occurred over the past couple of decades. The group of “speculation is essential” preachers seem to be a more modern crowd while the “speculation produces excess volatility” purveyors seem to be of ancient history. With the emergence of high frequency trading and the age of securitization where everything and anything can be bundled and sold, the speculation naysayers have re-emerged. The pattern shows that more often than not, in times of great market volatility pundits always come out blaming the speculators. However, in times of sustained market stabilization, there is rarely any mention of the issues that speculators pose to the market. Meanwhile, there are always speculators present. I will leave this last observation as my final argument for the position I have built.

I just completed this Comp’s/Multiples analysis for a class project and wanted to share with the blog:

With this analysis, I was also able to prepare the following valuation: 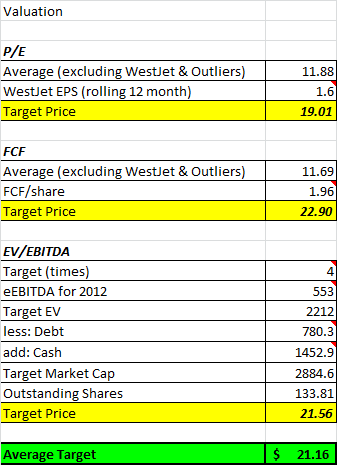 This average target price represents a 12.3% increase over what the stock is trading at. The main risk here is oil as it looks like oil prices are bottoming out. My recommendation would entail waiting for the oil cycle to reverse up and then buy WJA when oil is high as opposed to when it is low. Airline stocks serve as an excellent hedge, as they tend to go up when oil goes down and are often negatively correlated with the market.