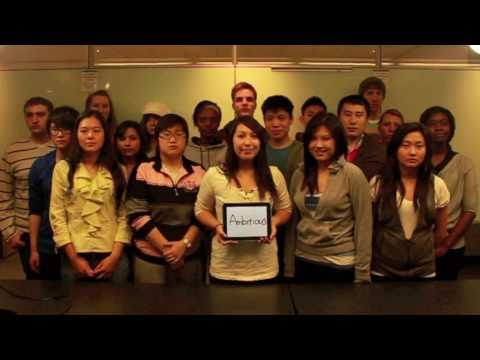 Wow! it’s been a long and interesting ride this academic year with EA! The crowning events? The busting stereotypes poster campaign and video. But if you don’t mind Let’s talk about the video, because that’s what I have been actively involved with 🙂

Wow! the video. This sounded like an amazing idea from the start. Each one of us in the group had their idea about what the videos_it was supposed to be a series of four videos_ would be like. But we all shared the same transcending vision: to __kindly, but decisively!_ thumb our nose at _yes. again!_  the infamous Too Asian MacLean’s article.

After many discussions regarding the themes and the format of the videos as well as the types of participants we wanted for each of them, we agreed on four topics (for details you all can check our facebook page D!Stereo). We _I_ were soooo excited! I even had the four videos already screening in my mind! Then, the real challenged began. We had to recruit.

Easy in principle. Not that easy when you actually try. Have you ever heard about those magical stories where hundreds of people rally a cause on facebook? Well… My fellow Equity ambassadors and I decided to use magic facebook. So, we decided to create a facebook group and we named ourselves D!Stereo (meaning D Stereotypes or Deconstruct stereotypes). We invited all our facebook friends to check it out and get involved. We also created posters that we posted on campus.

Have you ever anxiously waited for that phonecall  that never comes? For that letter that never comes? Well, that’s kind of what happened with our recruiting. No one responded. We tried to modify our mode of recruiting in the hope to get responses but nothing substantial occurred. After few weeks, I was really starting to think that we may not make it after all. But, hey, the Equity Ambassadors are not quitters. We decided to go, camera in hand, throughout campus and to ask students for interviews on the spot. This strategy was not completely unsuccessful. We had some magic times with really enthusiastic people. But the process was slow and editing on the spot interview revealed to be difficult. We were running out of time.

After plan A, plan B and plan C had failed, we decided to organize a brunch/filming session at the occasion of which we would invited some friends. The brunch/filming session became a pizza dinner/filming session; and, as recruiting revealed to be very difficult and  time was running out,  the group members decided to be the front figures of the video. Finally, the letter that we did not expect arrived. The call we were not waiting for anymore came.  Not that we thought that the video would not get done, rather the feeling of seeing it happening afer much struggle was amazing.  The session was amazing!  We had a good time with friends. The filming went smoothly, although we had to come up with some technical adjustments. The food was delicious. And we got some good laughs.

The outcome of this session?_ and of weeks of  work!_  A video that  summarizes the idea driving the  2010-2011 EA program: Stereotypes do NOT define us!