Hamish is a third year UBC Law student with interests in international and human rights law. He is the recipient of the 2013 UBC Law Research Abroad Grants Program, which provides students with the opportunity to participate in research projects internationally.

Here he discusses a recent talk given by Tibetan Prime Minister, Dr. Lobsang Sangay, at UBC on Tibet’s political future.

Tibetan Prime Minister in Exile Agrees with Mao: “where there is repression, there is resistance”

Speaking in Vancouver at the end of February, Tibetan Prime Minister in exile Dr. Lobsang Sangay had some words of wisdom for the audience, as well as words of hope for Tibetans around the world.  After a brief speech, the Prime Minister spent an hour taking questions from an audience surprised to see him in their midst – Vancouver is rarely a stop on diplomatic speaking tours, and this visit by a sitting head of state was a rare event. Since his election as the Prime Minister of the Central Tibetan Administration in exile in 2011, Dr. Sangay has brought a new personality to Tibet’s international diplomacy. Following the Dalai Lama’s decision to step down from his political duties (he remains the spiritual head of state), the new Dr. Sangay continues to pursue what he describes as a “middle path” approach to Tibet’s relations with China. 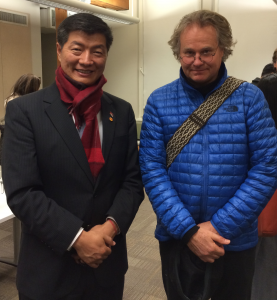 This approach hopes to achieve a level of autonomy for Tibet somewhere between the current state of repression and the full autonomy accorded to an independent nation state under international law.  The “middle path” sought by the Prime Minister does not go as far as requesting the level of autonomy granted to China’s Special Economic Zones in Shenzhen and other centrally adMinistered cities, or the “one country, two systems” approach adopted in Hong Kong, and Macau (another island colony which Portugal had been willing to return to China with none of the conditions for self-governance that were insisted on for Hong Kong).

Leaning on the Law

As a legal scholar, Dr. Sangay made sure to stress the clarity of Tibet’s claims to statehood under international law. According to the Prime Minister, the long historical record of Tibet as an independent state, with (a) distinctive and well established territorial boundaries; (b) an easily identifiable national population; and (c) the formal recognition of Tibet by other states through formal diplomacy and the signing of treaties, all establish its status as an independent nation under international law.  With this relatively unassailable argument for Tibetan statehood, Dr. Sangay’s request for a basic level of autonomy – akin to that which is enjoyed by the centrally administered city of Chongqing, for example – appeared as a modest request.

The last 50 year’s of Tibetan occupation were described as an aberration in the legal history of Tibet-China relations, which have been characterised by mutual recognition of sovereignty and back and forth conquests through a number of dynasties. According to the Prime Minister, the mode of accommodation that existed in the Qing, Ming, and earlier dynasties would be preferable to the current state of repressive politics.

These historical comparisons elicited an angry response from one audience member, who suggested that Tibet lacked the pre-existing legal frameworks for self-government existing in Hong Kong. With a JSD in law from Harvard University, Dr. Sangay was able to provide a meticulous articulation of Tibet’s claim for legal autonomy both under the Constitution of China as well as under international law.

When asked about the nature of Tibetan resistance to repression and occupation, the Prime Minister responded that Mao Zedong, the founder of the People’s Republic of China, summed up the current state of affairs:  “Where there is repression, there is resistance.” He then went on to describe his position on self-immolation of Tibetans inside Tibet – an issue which both himself and the Dalai Lama have spoken publicly on – stating that self-immolation is not an effective technique and that “all life is precious.”