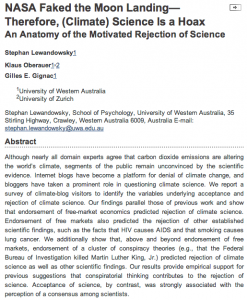 In 2012 Stephan Lewandowsky, University of Western Australia published an article in Psychological Science, which analyzed anti-climate change blog comments to explore the idea of conspiratorial ideation. He concludes people who believe in one unsubstantiated conspiracy theory are likely to believe in others. Amusing at times (people who believe Princess Diana was ordered to be murdered by the Royal Family are also likely to agree she faked her own death and is still alive ~ pay no attention to the contradiction) and decidedly not amusing at other times (people who endorse free market economics reject climate change, and a number of other scientific facts like HIV causes AIDS and smoking causes lung cancer ~ pay attention to the potential constraints on improving the quality of individual and collective human life).

This article outraged conspiracy theorists and a maelstrom of protest hit the blogosphere, which Lewandowsky also analyzed and published in a subsequent article in the Frontiers of Psychology, part of the Frontiers conglomerate publishing 45 open access journals in all. This paper was also challenged by the conspirators, and although no fault could be found with the quality or ethics of the research Frontiers has withdrawn the article from the journal with the vague legal issue (read, I think, fear of a lawsuit) as the reason.

But fear not, you can still read the paper, Recursive fury: Conspiracist ideation in the blogosphere in response to research on conspiracist ideation, thanks to academic freedom and the internet. Read more at I Fucking Love Science, here. And, there are no shortage of blogs that follow the climate change deniers (see, for example, Watching the Deniers).

Lewandowsky also talks at length about the controversy and issues.

Stephan Lewandowskay: In Whose Hands the Future? from Peter Sinclair on Vimeo.

What should trouble ALL researchers is that a powerful special interest group has threatened academic freedom, and especially an open access journal that although levying author fees does not likely have the resources to withstand legal challenge in the same way that a for-profit publisher does. Sage Publications, owners of the journal in which the original article was published, never buckled under protest to the original article now referred to as LOG12. Indeed, an investigation by the journal asserted no wrong doing and Lewandowsky’s own university supports him by posting the article on the UWA website, thus also affirming academic freedom. Even more important, this threat is based on  skeptics disliking the research topic and conclusions ~ not one based on poor quality research, unethical research practices or failure of the peer review process. This is a chilling prospect for all researchers, but especially so when research challenges powerful ideologies that effect rationale critique and potential positive social change.