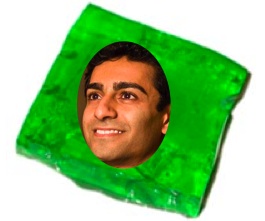 The first epic battle was between our unicorn lovers Chairman Naylor and “Do Me Now” Duncan. Duncan swooped Naylor in his goggled rubber ducky glory after many a clawful attacks and elbows between the two. Then came a Senate battle of Ben, Joel, Sean, and Spencer, with Ben/Sean capturing the victory. (Editor’s note: We endorsed Sean for this battle as well, he had some beautiful hearts and a rainbow coloured on him). Joel… survived.

Jeremy “Mr. Beret” McElroy was the only VP External candidate raring to go (Aaron! Where were your guns?! Tim, where was your UN resolution?! Stas, those free chocolates don’t go very far!1!!), so he took on Chairman Naylor again.  McElroy fought hard, but in the end, Naylor took the win—by about .03 seconds.
Rumours were circulating throughout the event- would Bijan show up, or wouldn’t he? As time wore on, rumors swirled through the hackosphere—he would! he wouldn’t! he would, but wouldn’t wrestle! he would take on ALL COMERS! He ended up coming to the event armed with flyers galore (same with Stas), and Natalie, clad in some epic spandex, challenged him to a jellotastic battle of Presidential candidates—to which BIJAN REFUSED. Uh, hello?!?!? 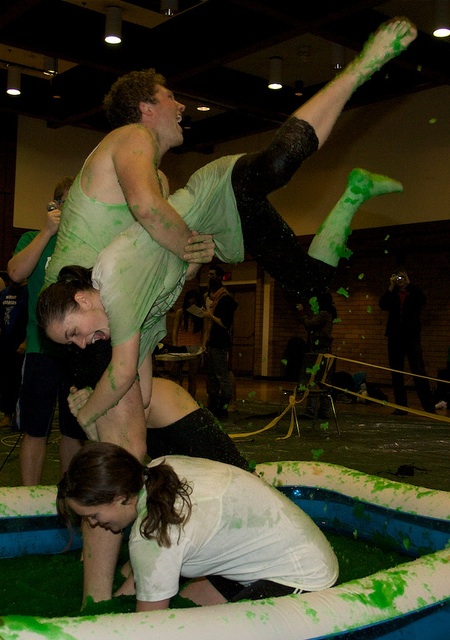 These editors deem the ability of a President to jello wrestle a major component when selecting our future AMS leader (regardless of whether or not we already endorsed Natalie), and the fact that Bijan turned Natalie down is an #epicfail. Perhaps he was afraid of her undefeated jello wrestling track record??
Natalie then took on Ekat “The Hottie”  (way to not even show, Michael Haack!) in a more mild mannered wrestle, in which Natalie took the victory. Then, the commentator had the audacity to endorse Bijan right afterwards—so not kosher, SUS Man. Natalie didn’t fail though, and sopping wet with jello she did a fist pump (ok, maybe not) and proclaimed

I’m running for President too, and I just jello wrestled!

Finally, she and Ekat then took on “Do Me Now” Duncan and Natalie won that ferocious battle as well.
Also: unfortunately, both of us had to work right after [K: or during, goddamnit] so we couldn’t get all muckied up. However, if the Faculty of Land & Food Systems wants to host mud wrestling, we’re down.