Long time no post! We won more moniez, Taylor is back (with less memes and more sparkles), people are storming some goddamn wall on campus, Gossip Girl aired, and it’s almost summer. Here’s a rundown of what is happening/a bunch of rumours in the sextacular AMS.

Secrets, secrets are no fun… 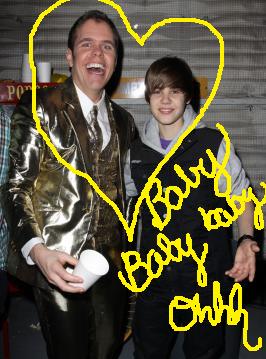 yes, taylor’s back… (her idols at perez’s birthday a few days ago)

After the jump we have some sexy Toope, the no alcohol at Koerner’s shit, and a clusterfuck of AMS rumours…

Tuesday night in the SUB: students/random UNA people present their ideas for campus transit to win money!!!1!!1! Issues That Matter/Schwarzenegger lover &  UBC’s Real American Hero will be presenting a Toope endorsed plan…uhm, Toope? WE LOVE YOU AND YOUR SACRIFICES <3 Plus, you’d be the hottest homeless guy evvvver. 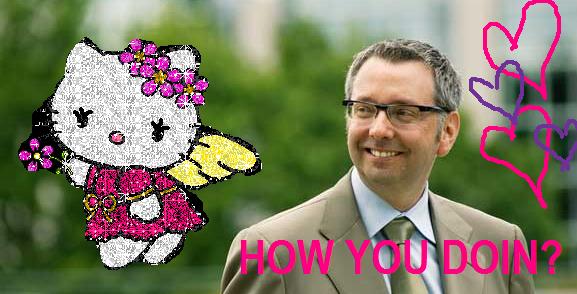 our idea: fly to school via fairy wings!

Campus and Community Planning is all up on their social media, and they’re even doing a live webcast (our hearts melt) of the Ideas Fair. We still don’t actually understand what exactly it is that C+CP do, but they have a pretty blog and RT our tweets, so we’ll check it out. Plus, there’s probably free dinner.

According to this sexy pdf, the pub we all know and love as Koerner’s is now NOT ALLOWED TO SERVE ALCOHOL. LIKE OMGZ. Since this is News for Noobs, the GSS (Graduate Students Society, you know, your TAs and those hot older men) operates Koerner’s, and all the moniez they make  go right back into the GSS. Well, Koerner’s fucked up big time and now they can only serve food and soda. So expect your Coke to cost about $5, but hey- you can still play those game things that are only fun when drunk sober! There’s also a Facebook group…in case you like to protest in cyberspace.

So there’s a lot of BIG SUPER IMPORTANT things coming up soon in the next few council meetings before summer!break!woot! having to do with the following rumours… 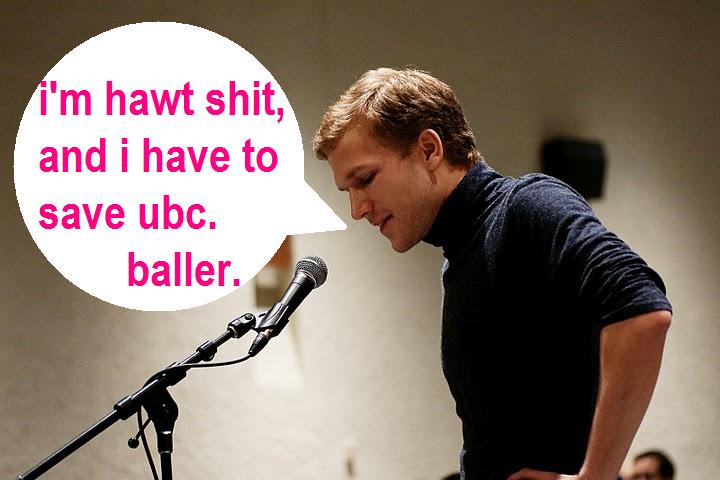 It’s a throwdown between former VP Academic Alex “Sir SUS” Lougheed & former VP Finance Tom “Kindergarten Cop” Dvorak!! In one corner there’s Alex saying that the referendum contravenes AMS policy, it sets a precedent across campus, it’s a tuition increase (alert!! where is timkachu??!?), and therefore the AMS needs to intervene. In the other corner is Tom who is in Sauder, is a concerned student, and has this video. We’re going to deem this an Issue That Matters and not make any jokes about the administration raising tuition through a backdoor. 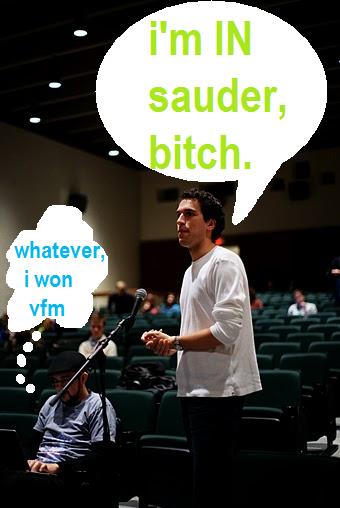 Sources say that Bijan “Needs a Nickname” Ahmadian wants to cut the equity & Safewalk programs. Structural deficit, anyone? This editor is slightly confused though…we have a structural deficit because our fees aren’t indexed to the CCCCCCPICIcPCIC whatever the fuck they’re calling it now thing which is also known as inflation. Therefore the money that the AMS receives stays the same but its costs go up….and something’s gotta go.

Yes, Safewalk needs a major overhaul—according to reliable elections-time sources, it would actually be cheaper to just drive people around. We heard Ben “the Situation” Cappellacci was working on some super awesome snookilicious plan, but despite his biceps and hard work Safewalk still seems to be on the chopping block. As for the Equity program, we hear it’s going to be run on a very small budget…and cutting equity over small coin just sounds like a very bad political move. Our American cousins have a saying for what Bijan seems to be doing lately: speak softly (or, rather, enthusiastically) and carry a big stick. 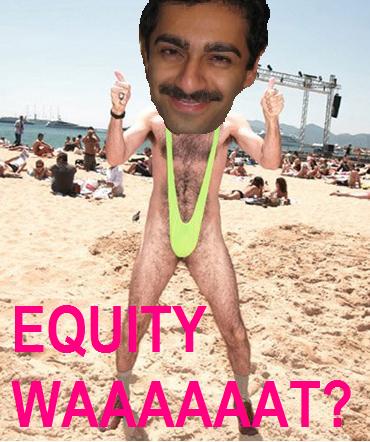 Should we stay or should we go now?

The AMS voted to leave CASA under the leadership of Blake & Tim…and according to some, were led astray by their vicious lies. Ok, maybe not vicious, and is lying really a shocker? [Ed. note: OH SNAP] Anyway, it should be interesting to see the future of the AMS and CASA—will we stay founding member lovebirds forever, or is this split 4 realz??!? However, let’s all just take a nice big breath and have a moment of gratitude that we’re not a CFS school. (Sorry, UVic, but your elections are even more fucked up than ours.)

SUB Negotiations are over! The AMS got Board 1 approval from UBC and its set to be operational by 2014. There’s going to be lots of fun stuff about the SUB coming up, and also lots that student media outlets will complain about, because that’s just what everyone does. Regardless, we’re pretty happy that Ekat “Smiley Miley”  is at the forefront…not only does she have a 100million dolllaahhzz plus budget to work with, she rocks the business look like no other and bakes a mean cupcake.

The next step is the selection of an architect, which is super neat. Click here for details on when they’ll be popping in the SUB and how you can vote for which you like best so your little siblings can appreciate it when they come here.

Ok, that’s it. See you Wednesday in council for some hacktastic fun, and if you’re really anxious to see us…at least half of us will be at the Gallery tomorrow. Like always.
P.S. A TIMELY DISCLAIMER!
O HAI there Confidentialites. Editrix Kai here, speaking to you from the heart heart heart. A lot of this news stuff coming up falls into the portfolio of someone I’m (some might say) a little too close to.  So, in keeping with our Way Totes High Journalistic Standards (4realzy’all), I’d just like to assure you all that in no way, shape or form will my conflict of interest interfere with our truthful & accurate coverage of events. In other words: if it’s on this site, and it deals with Jeremy McElroy, I’m taking a sideline.
FYI: our collective twitter hashtag is #kmac. also, #barftastic. …seriously, i couldn’t make this shit up.

2 thoughts on “Your Sporadic Dose of News for Noobs”