The question of whether or not to destroy the last remaining stocks of the smallpox virus (variola) is one that comes up perennially within diplomatic and scientific circles.  Currently, it is stored in two laboratories – the Centers for Disease Control and Prevention (CDC) near Atlanta, GA, and the State Research Center of Virology and Biotechnology (VECTOR) in Koltsovo, Russia. 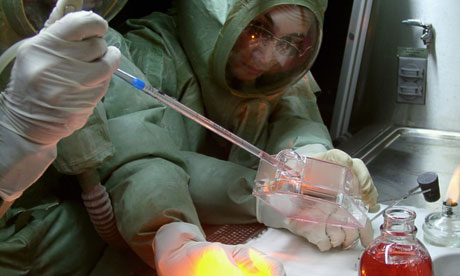 Smallpox is the first human disease to be eradicated from the population, and is due to a massive World Health Organization (WHO) vaccination campaign throughout the 20th century.  This was an incredible achievement, and one that has yet to be accomplished for current targets like polio and malaria.  The last case of smallpox was in 1978, and resulted from a laboratory escape of the virus.

This scourge was truly frightening.  It killed hundreds of millions of people in the 20th century alone, up to third of those who contracted it.  The survivors were often left disfigured or blinded. There is currently no natural immunity to the smallpox virus in our unvaccinated generation. Its release back into the human population is something that should be avoided at all costs.

Up until 2002, the official stance of the WHO was that the remaining stocks of variola should be destroyed.  A consensus towards conserving the stocks now seems to be emerging in the scientific community.  A recent editorial in the journal Nature advocates this approach.  It argues that there may be other places in the world where the virus still resides (it is a virus after all, and could therefore remain infective indefinitely), and that the chances of it escaping the secure laboratories in the US and Russia are exceedingly unlikely.  Also, there may still be things we can still learn about the virus to develop better vaccines and drugs if the worst ever happens.

The destruction of the physical virus may prove to be redundant, however, with emerging biotech advances that could allow re-construction from the genome alone.  After all, we already have a full genetic sequence in digital form.

And so, it seems, this is a question that is quickly becoming moot.  However, this doesn’t do much to decrease the creepiness factor in the eyes of many.  I happen to be one of them.

This entry was posted in Biological Sciences, Issues in Science, Public Engagement, Science Communication, Science in the News. Bookmark the permalink.

One response to “Save the Smallpox?”