The Federal Court of Canada recently released its decision in La Rose et al. v Canada, a case brought against the Government of Canada by 15 Canadian youth. The youth argued that Canada has failed to implement a plan ambitious enough to reduce greenhouse gas (GHG) emissions to levels compatible with a “stable climate capable of sustaining human life and liberties” (Plaintiff’s Statement of Claim at para 3). As a result, the youth argued, Canada has violated their rights to life and equality under the Canadian Charter of Rights and Freedoms, a document which enumerates the rights and freedoms protected under the Canadian Constitution. The Court rejected the youths’ claims as too political, due to its breadth, to be heard by a court. La Rose is an example of individuals seeking to protect their human right to a healthy environment using the Charter. This case is one of many similar climate change challenges that have been dismissed by courts not only in Canada, but around the world. 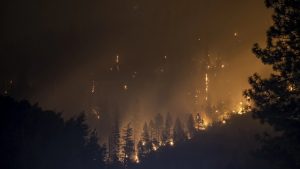 Forest fires like this one in Klamath National Forest, are increasingly linked to climate change and result in poor air quality deemed harmful to human health. Photo credit: Matt Howard on Unsplash.

Why won’t courts hear issues that are ‘too political’?

Canada’s system of governance is separated into three branches – legislative, executive, and judicial; this is often referred to as the separation of powers. Each branch has a unique role and endeavours to avoid infringing the role of another branch. The judiciary’s role is to interpret and apply the law, contribute to its incremental development, and provide remedies to individuals whose rights have been violated. The legislature, as the most democratically legitimate branch of government, has the role of creating laws which reflect the will of the people. The executive retains a decision-making role within the legal framework determined by the legislature.

The roles of the three branches of government are not perceived as watertight compartments in Canada. However, it is widely accepted that a balance between the roles of the three branches must be maintained. In accordance with this balance, if the Court finds that a matter falls under the responsibility of the legislative or executive branches (i.e., the “political” branches), rather than that of the judiciary, it will dismiss it as non-justiciable and may refer to it as ‘too political’.

The rejection of cases under the guise of non-justiciability is a common barrier to human rights-based climate change litigation. In Friends of the Earth, the Canadian Federal Court of Appeal affirmed that a challenge to the content of Canada’s climate change plan under the Kyoto Protocol Implementation Act, 2007 was non-justiciable because the development of the content of the plan was the responsibility of the legislative branch. More recently, the United States Court of Appeals for the Ninth Circuit dismissed another human rights-based claim in Juliana – which challenged the U.S. government’s action on climate change – as non-justiciable because the remedies sought fell under the jurisdiction of the executive. La Rose is the latest case to encounter this justiciability barrier.

Was the claim in La Rose too political?

The Federal Court concluded that the breadth of the challenge in La Rose and the resultant infringement of the roles of the legislative and executive branches compelled a finding of non-justiciability. The Court expressed concern that the youth challenged “an overly broad and unquantifiable number of actions and inactions” (at para 40) which would have required the Court to weigh in on the government’s entire policy response to climate change. It further indicated that such a request is “so political that the Courts are incapable or unsuited to deal with [it]” (at para 40). The Court concluded that the policy choices of government can only be challenged when they are translated into law or state action. Since the youth in La Rose did not challenge a specific law or state action, the Court concluded that the challenge was too broad and therefore infringed on the roles of the legislative and executive branches, making it non-justiciable.

However, more targeted challenges are problematic in the climate change context. Such challenges will require plaintiffs to choose specific laws and state actions that violate their rights. While this strategy was successful in overcoming a justiciability challenge in the recent Ontario Superior Court decision, Mathur v Ontario, this approach risks leaving the Court with an incomplete understanding of the cumulative impacts that a broader network of interacting laws may have on Charter rights. Consequently, a thorough judicial assessment of violations may be impossible and remedies may be ineffective. Further, more targeted challenges will increase the number of cases required to provide meaningful remedies to those whose rights have been violated. The increased number of cases will result in longer delays as they work their way through the already strained Canadian court system, undermining Canada’s ability to respond to the urgency of the climate crisis.

Given the unique challenges presented by targeting more specific laws or state actions in the climate change context, I suggest that the Court took an unduly narrow view of its role in La Rose. The subject matter of the action concerned the vindication of a human right, recognized by international agreements to which Canada is a signatory and argument about the scope of rights under the Charter. Canadian courts have repeatedly affirmed that allegations of Charter rights violations are justiciable. Neither the legislative nor executive branches of government are equipped to independently evaluate the impact of climate change policy on human rights. The Court’s refusal to hear the case in La Rose reinforces a rising concern that broader climate change policy is a “Charter-free zone” where rights are immaterial, as argued by the youth in La Rose. Instead, the Court’s concern about trenching on the roles of the legislature and the executive should be addressed through the types of remedies ordered after it has heard the full case.

Breadth should not be a barrier to justiciability. The government’s conduct relating to climate change must be assessed as a whole to capture the cumulative effects of all relevant actions and inactions on GHG emissions. As argued by the youth in La Rose, such broad challenges have been successful in other countries, most notably in the Urgenda decision issued by the Supreme Court of the Netherlands. In that case, Dutch citizens sued their government for insufficient action on climate change which they alleged violated their rights to life and to respect for private and family life under the European Convention on Human Rights. The Court ruled in favour of the citizens and upheld an order that the Dutch government meet a specific GHG emissions reductions target, without dictating how the government should reach this target. Compared to a challenge targeting a specific law or state action which, if successful, could result in the elimination of that law or prohibition of that action, a challenge to a broader range of government conduct on climate change gives the legislative and executive branches more flexibility in amending or removing existing laws and policies and introducing new ones at their discretion to meet more stringent GHG emissions reductions targets. The Federal Court’s refusal to hear such a challenge in La Rose, despite the Urgenda decision, sets a disappointing precedent in Canada.

While the La Rose decision is a disappointing development in human-rights based climate change litigation, it does provide guidance for addressing justiciability challenges in future cases. The more recent success in the Mathur decision provides hope that the justiciability barrier may be overcome in the climate change context. Challenges remain, however, in demonstrating how broader climate change policy could be justiciable. Advocates may wish to look more closely at how government conduct on climate change was successfully challenged in the Urgenda decision.

Gillian Thiel is a 2L student at the  Peter A. Allard School of Law working with the IJHR Clinic as part of the Environment Team.