Here in Christchurch, New Zealand, the semester has just begun. My extended Christmas vacation has finally ended and I’m embarking on a new experience and adding another student card to my already extensive quiver. It’s hard not to miss the immaculate classrooms and conveniences of Allard Hall, but I’m really looking forward to the experience of studying in Christchurch. Last week we international students had our induction and welcome, and amongst the eager new faces (some as young as 16!) I felt like somewhat of a veteran. Not only am I a bit older than some of the students here, but I was in Christchurch for its first big earthquake in 2010, so when our welcome lecture opened with cautionary notes about what to do in the event of an earthquake, I didn’t feel the need to panic. Growing up in Vancouver also means that you get to be somewhat of a duck-and-cover expert, given the yearly earthquake drills. We’ve had a few little quakes since I’ve been here, but nothing too terrifying. Residents of Christchurch have developed a pretty relaxed (and typically Kiwi) attitude towards these little tremors, and puns about the ‘city that rocks’ or ‘shaking things up’ are hugely popular.

It seems that there are many ways to help Christchurch rebuild and develop from the earthquake. There is a ‘Student Volunteer Army’ which helps with various rebuild projects, and even a class called ‘Christchurch 101’ which allows students to participate in rebuild projects for credit. It’s nice to see the community strengthened and united despite the earthquake’s destruction. (Side note: we should name earthquakes. It sounds better to say ‘the destruction caused by Sandy’ rather than ‘the destruction caused by the earthquake’. Maybe there should be a threshold – say anything over a 6 on the richter scale gets a name?). 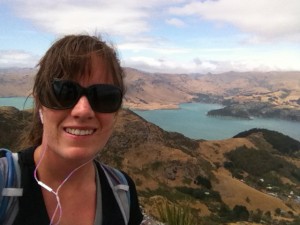 The author enjoying a trail run in Christchurch’s Port Hills.

Life at Canterbury University has its differences to UBC, but also a few familiar themes. Next week will commemorate the second anniversary since ‘the earthquake’, and campus is still busy with construction crews and clusters of temporary buildings. This is a familiar sight to someone from UBC’s perpetually under-construction campus, and in particular to students who moved into Allard Hall while the building wasn’t quite ready for us. One difference I’ve been quite excited about is that the campus security patrollers ride Segways. Segways! I didn’t know those existed outside of Arrested Development (the greatest show ever to grace television screens). I am considering applying for a security job just so I can rip around campus on one. A career in law vs. a career on a segway? I think there is a clear winner here.

I’ve been nervously anticipating the first day of classes, wondering what the study of law in a different country would bring. I was worried that things would quickly get out of my depth, that professors would refer to unfamiliar cases, and that I would make mistakes about the structure of the New Zealand court system. Imagine my surprise when we spent a significant part of my first lecture (on the New Zealand Bill of Rights Act) discussing the Canadian Charter of Rights and Freedoms! When the professor (as it turns out, a UBC alumnus) asked if any of us were familiar with the Oakes test, I shot my hand up excitedly. As it turns out, Canada is kind of a big deal for our entrenched Charter.

This is my second exchange to New Zealand, having attended the University of Otago for a year as part of my Bachelor of Arts at UBC. I’ve been curious to see if there is a significant difference in the culture of arts students and the culture of law students. I remember distinctly being classed as ‘that American nerd’ by a number of my Kiwi classmates during my previous exchange, as I was often the only student who spoke in class (and let’s face it, no one can tell the difference between Canadians and Americans). It seemed that speaking in class was just not the done thing – even when professors were posing specific questions. I didn’t really mind being the outspoken stand out in class; I wasn’t there to look cool in front of my class mates, and as a result I gained favour with my professors, who became very useful references when I began my law school applications. The silent approach to learning that characterized my previous exchange definitely contrasted my experience as a UBC Arts student, but even more so my experience as a UBC Law student. I have found my classmates at Allard Hall to be inquisitive, vocal, and generally actively engaged in class discussion. In my experience so far at the University of Canterbury’s law school, the students seem to be fairly vocal and engaged. I’m finding this to be a relief as I dread that moment when the professor poses a question and everyone looks at their feet/computer/notebook/phone.

While I wish that there was a button on Facebook that would allow me to block the words ‘skiing’, ‘snow’, and ‘powder’ from appearing on my news feed, I’m still happily soaking up the New Zealand summer sun and looking forward to an exciting semester. 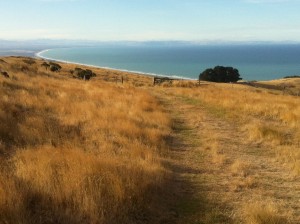 Evening sun in the Port Hills above Christchurch, New Zealand.