It’s an interesting time to be a law student in New Zealand. This   year,  between February and July, there is an ongoing ‘conversation’ occurring regarding New Zealand’s constitution. I had the pleasure of attending a panel that featured speakers from the Constitutional Advisory Panel, practicing lawyers, and some of my own professors from right here at the  University of Canterbury. Many audience members took park in expressing their views about New Zealand’s Future.

New Zealand is one of just a few countries that doesn’t have a written constitution, and right now, that’s under review. The review process, sparked by an agreement between New Zealand’s National and Maori parties, is hugely collaborative. Submissions are being sought from everyone across New Zealand on whether they’d like to see constitutional reform, and what shape a written constitution could take. The ‘conversation’ has been made accessible to New Zealanders through a variety of panels, public meetings, and online.

Among the main issues for review are:

For a country that, in my opinion, is quite similarly thinking to Canada, the constitution is starkly different from ours. Not only is there no one written document (which mirrors the British model), but there is a lack of constitutional clarity on indigenous issues, human rights, and the role of the judiciary in declaring laws to be inconsistent with the Bill of Rights.

Currently New Zealand has an immensely powerful parliament, with little check to their power. I believe it was Prime Minister Robert Muldoon once said that if he thought of a piece of legislation he wanted to pass at breakfast, it could be law by lunchtime. New Zealand has no upper house, and no formal constitutional supremacy, meaning that Parliament can by and large do what it wants.

An interesting difference between New Zealand and Canada is the term of Parliament. In New Zealand, this is 3 years, which is interesting given that the electoral system is mixed-member proportional representation. The result of an ‘MMP’ system is that there are more parties represented in the house, and thus there is more collaboration between parties. Some have pointed out that this collaborative system is somewhat slow moving, and that a longer term is warranted.

The Treaty of Waitangi is perhaps the most controversial issue amongst all of these constitutional questions. It was signed between Māori and Pākehā (the term given to New Zealanders of European origin) in 1840. It is considered to be New Zealand’s founding document, and thus is likely part of New Zealand’s constitutional framework. However, the English and Māori texts of the treaty were quite different. There has been much litigation and legislation surrounding the Treaty, but with little resolution as to its true force and power.

This ‘conversation’ will offer New Zealanders the chance to express themselves, offer their views, and to educate themselves on their constitution. While the conversation may not lead to any true reforms, it seems like it is a fantastic exercise for a country to come together, to discuss their identity, and to forge a path to a common future.

The website is worth checking out. It’s amazing how accessible this review is to ordinary New Zealanders, and the efforts that have been made to get input from everyone. 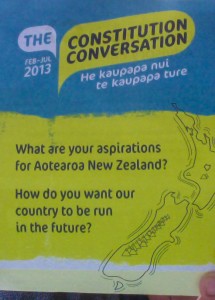 The cover of a brochure about ‘The Constitution Conversation’.