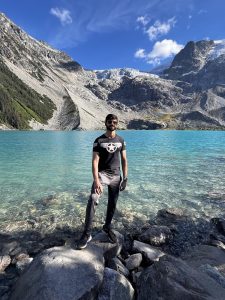 A little bit about me

Hey, I’m Ahijit! I’m a fifth-year student who loves hiking and the outdoors! I play a few sports like tennis, badminton and swimming but my competitive side is always looking for an opportunity to get humbled.

I guess the best way to describe me is if it has something to do with the outdoors, I’m probably interested … story of how I joined Pokémon Go during covid and completed most of the trails in North Vancouver this summer!

I wish I had known before I came

Coffee is the answer to all your problems…

Okay, jokes aside, as an international student I found the first year to be the bumpiest one, not because of school but everything else that needed to be figured out alongside it. UBC has multiple help sessions and services for international students and I would advise looking into them rather than trying to figure everything out on your own. It is an overwhelming year with probably the most number of courses you’ll take at each term, so getting help or just general advice would go a long way in reducing stress.

I chose mechanical engineering because

Seeing an airplane extend its flaps, throttle up the main engine and then sprint across the runway to take flight always gets me excited like a giddy four-year-old. I’ve always been someone who likes to get their hands dirty to get stuff done and Mechanical engineering was the perfect place. I could get my hands dirty here on almost a daily basis while exploring my interest in aero and hydrodynamics (thus my specialization in Thermofluids).

Mechanical engineering at UBC in one word

The best part about studying mechanical engineering is seeing your ideas and designs come to life. It is a surreal feeling when your design leaves SolidWorks and is sitting on the table in front of you, or your MECH 2 project moves for the first time after a gruelling month of caffeine-driven design.

Another thing I love about being in MECH is being able to use the machine shop. MECH 2 was the first time I had ever stepped inside a machine shop and it filled me with a sense of awe that I would be able to proficiently use all the things in there at some point. Three years and five co-ops later, my respect for the privilege to be able to work there has only increased.

Outside the classroom, I’m involved with

You’ve probably heard of duct tape and super glue, right? Well, the night before the MECH 2 competition when we were testing and the main drivetrain shaft broke, and the wheels of the RC rover came off with no spare components on hand – well that was a duct tape situation.

Seeing the rover being held together with the most random things possible and surviving the competition is one of my favorite memories!