The birth of a clicker question

It’s easy to come up with poor clicker questions, ones that merely test who has memorized X, Y, or Z from the previous slide. Or questions where there is no way to figure out the answer: either you’ve got it or you don’t.

Good clicker questions, on the other hand, take some time to create. Sure, you might stumble onto a good one every now and then, and it gets easier as you do it more. But it’s really gratifying when you put in the time, and it works. Here’s my story. 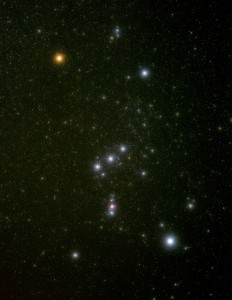 How bright a star appears in the sky depends on many quantities: the star’s colour, temperature, size, distance, and more. Hotter stars pump out more light, but a small, hot star might not be very bright (are there any white dwarfs visible to the naked eye?) Unless it’s nearby. Cooler stars don’t shine much but a gigantic, cool star can be very bright, like Betelgeuse, the bright, red star that marks Orion’s shoulder. Unless it’s very distant. Untangling the temperature, size, distance, brightness puzzle can be touch for astro 101 students. But its really important because only through untangling can we determine the actual amount of energy — how many joules per second —  a star is emitting. That quantity, the luminosity, is critical for predicting the evolution, past, present and future, of the star.

In our astro 101 class, we wanted to explore only the trade-off between size and distance. Look at the two whitish stars at the bottom of Orion that mark his knees, and think about this:

Star 1 and Star 2 have the same temperature. Star 2 appears brighter in the sky. How is this possible?

Is Star 2 the same size and closer? Or the same distance but bigger? What about farther but much bigger – would those differences counteract each other? Oh, and how do you make this a multiple choice question?

The first step was to find all the scenarios of size and distance.  It is possible for Star 2 to be brighter than Star 1 if Star 2 is:

Translate each scenario into words, focusing on Star 1 or Star 2. The numbers in this list refer the numbered scenarios in the table.

Now to turn it into a clicker question. A good clicker question, that is, one that could spawn conversation and peer instruction. First, let’s pick 5 scenarios from the list, including some yes (1b, 2a, 4b),  no (9b) and especially, a maybe (7a). Now the sneaky part: don’t ask the students which are possible, ask how many are possible. Here’s the clicker question we used: 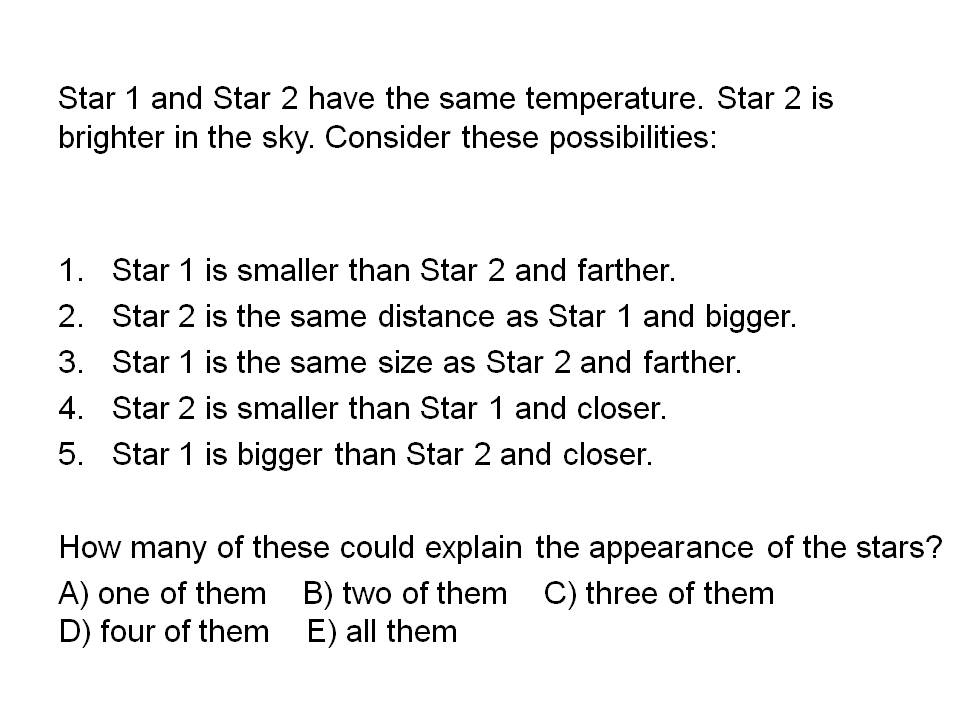 Here was our plan. It’s all about the ambiguous “maybe” scenario 4. If a majority of the class chooses the correct answer “D) four are possible”, we’ll respond with, “Great! Which one isn’t?” And if many students choose “C) three are possible”, we’ll counter with some pairing and sharing.

Here’s how many students voted for each choice in the first (“think”) vote. How many scenarios?

Ha! Just as we suspected! Without revealing the votes to the class, we countered with, “You’re not all agreeing. How interesting. Turn to your neighbour and convince them you’re right. You have a minute, starting…NOW!” (pair-pair-pair-pair tick-tick-tick-tick)

Excellent! Not consensus, but a nice shift to right answer, four scenarios. And we were ready for it. Time for some discussion:

Almost every agrees that 3 or 4 of these are possible. Is there one that’s definitely impossible?

Great. So which is the other one that might be wrong? [Full disclosure: no one answered until we further prompted with] What about Number 4?

A student at the back of the room (doubly-excellent!) said, “Well in Number 4, it depends how much smaller and how much closer…” Yes, Yes, YES! Exactly! Ahhh, golden.

There, that’s my clicker story for today. Thanks for hanging in to the end. This posting is really a chance for me to record how we made up the question and how we planned our responses. I can easily imagine applying this approach to other phenomenon that depend on 2 variables. Maybe you can, too.

Find me on Twitter @polarisdotca
View all posts by Peter Newbury →
This entry was posted in astro 101 and tagged clickers, stars, think-pair-share. Bookmark the permalink.