My tweeps are coming with me

As I announced recently, I’m

leaving UBC and Vancouver for a new position at the University of California, San Diego. Amongst the hundreds of joys, sorrows, thrills and frustrations of leaving one community and joining another, twitter is playing an important part for me.

Yes, this is another post recommending you get on twitter if you’re not there yet. And if you are there, here’s another reason why that was a good choice.

One of the things that is making this move easier, and harder, is twitter. I already chat regularly with dozens of colleagues around the country that I’ve never met in person. I’m not leaving them behind when I move. They’re only an arm’s length away in Tweetdeck on my laptop and hootsuite on my phone. That’s only as far away as they’ve ever been.

There are lots of people I know, I like, I [gulp] love in real life, here in Vancouver, that I’ll continue to work with, laugh with, #happytears with, and occasionally #damnsomethinginmyeye with via Twitter.

It’s comforting that my followers and followings are coming with me. I waved goodbye to a few colleagues yesterday and felt almost no twinge of sadness because I chat with them almost every day on twitter.

Of course, getting together with colleagues and friends is important. We’re social animals, we need that interaction. I’m not suggesting I don’t value that or crave that. I am suggesting that twitter softens the gash of leaving your community.

It’s funny but I felt bad, almost guilty, during the time between applying for the job and getting it because I couldn’t share my job-getting experiences with my Twitter community. You know, confidentiality of who’s applying for jobs, not wanting to reveal any info that might come back later. And honestly, not wanting to reveal going after a job and then not getting it. I’m so used to sharing my professional and personal adventures, I felt bad hiding the thrill of emailing my CV, or how nervous I was just before the interview, or the adrenaline rush when it was over.

It was such a relief to finally share my news. 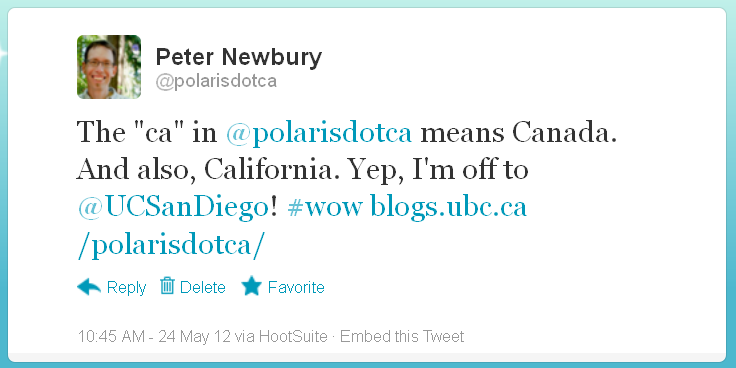 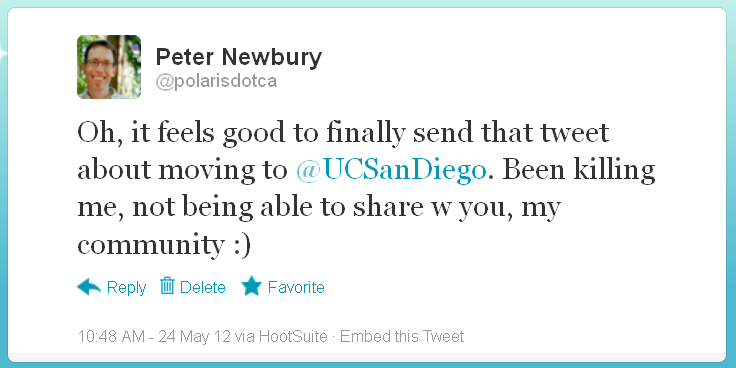 There you have it:

Reason #781 for being on twitter: Your followers and followings come with you when you move.

Find me on Twitter @polarisdotca
View all posts by Peter Newbury →
This entry was posted in social media and tagged thanks, twitter, UCSD. Bookmark the permalink.

2 Responses to My tweeps are coming with me