A Tale of Two Comets: Evidence-Based Teaching in Action 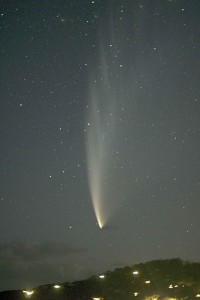 Comet McNaught wow'd observers in the Southern Hemisphere in 2007. (Image by chrs_snll on flickr CC)

We often hear about “evidence-based teaching and learning.” In fact, it’s a pillar of the approach to course development and transformation that we follow in the Carl Wieman Science Education Initiative.

It’s a daunting phrase, though, “evidence-based teaching and learning.” It sounds like I have to find original research in a peer-reviewed article, read and assimilate the academic prose, and find a way to apply that in my classroom. Does a typical university instructor have the time or motivation? Not likely.

It doesn’t have to be like that, though. There are quicker, easier analyses and subsequent modifications of materials that, in my opinion, qualify as evidence-based teaching. Let me share with you an example from an introductory, general-ed “Astro 101” astronomy course. First, a bit of astronomy.

Comets and their tails

Comets are dusty snowballs of water ice and other material left over from the formation of the Solar System. The comets we celebrate, like Comet Halley, travel along highly-elongated, elliptical orbits that extend from the hot, intense region near the Sun to the cold, outer-regions of the Solar System. 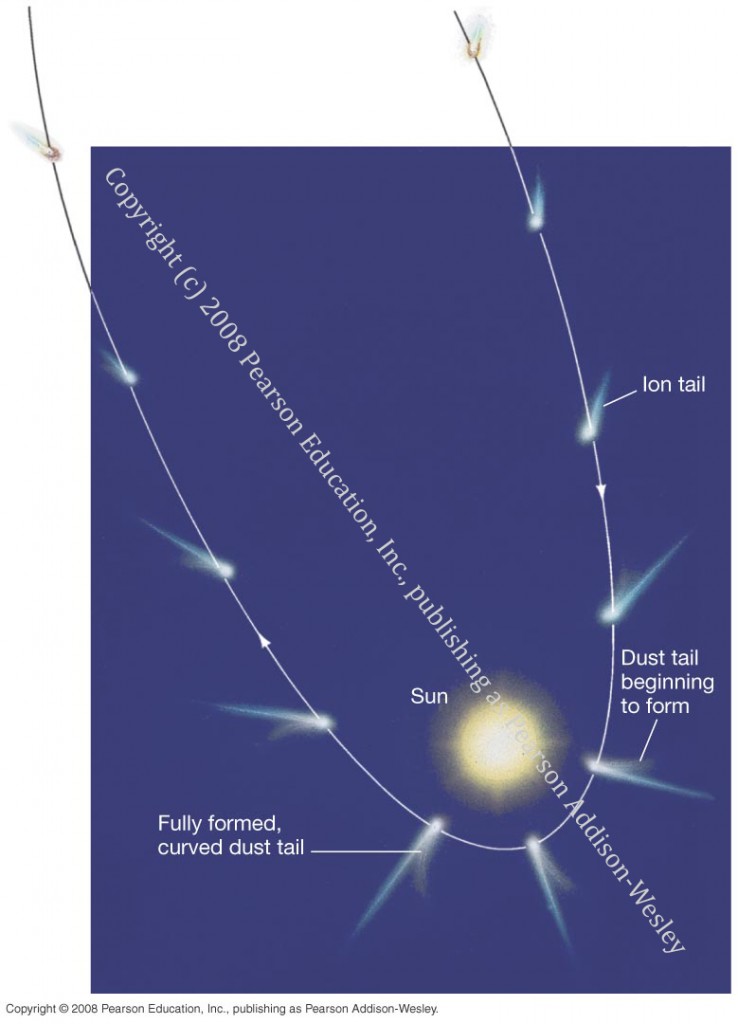 A comet's tails point away from the Sun. The comet is orbiting clockwise in this diagram so the yellow dust tail trails slightly behind the blue ion tail.

As comets approach the Sun, like Comet Halley does every 76 years, the comet’s nucleus warms up. The ice turns to gas which creates a sometimes-spectacular tail. The tail grows larger and larger, streaming out behind the comet until it rounds the Sun and begins to head back out into the Solar System. That’s when something interesting happens. Well, another interesting thing, that is. You may think the comet’s tail streams out behind like the exhaust trail (the contrail) of an airplane but once the comet rounds the Sun, the tail swings around ahead of the comet. Yes, the nucleus follows the tail. That’s because the tail is blown outward by the solar wind so that the tail of a comet always points away from the Sun. (Well, there are actually 2 tails. The ion tail is strongly influenced by the solar wind – it’s the one blown directly away from the Sun. A dust trail also interacts gravitationally with the Sun, causing it to curl out behind the ion tail.)

It’s not what you’d expect, the tail wagging the dog. And that’s make it a great opportunity for peer instruction and follow-up summative assessment.

Last December, the course’s instructor and I sat down to write the final exam. We could have used a multiple-choice question

Or perhaps a more graphical version, like this one from the ClassAction collection of concept questions: 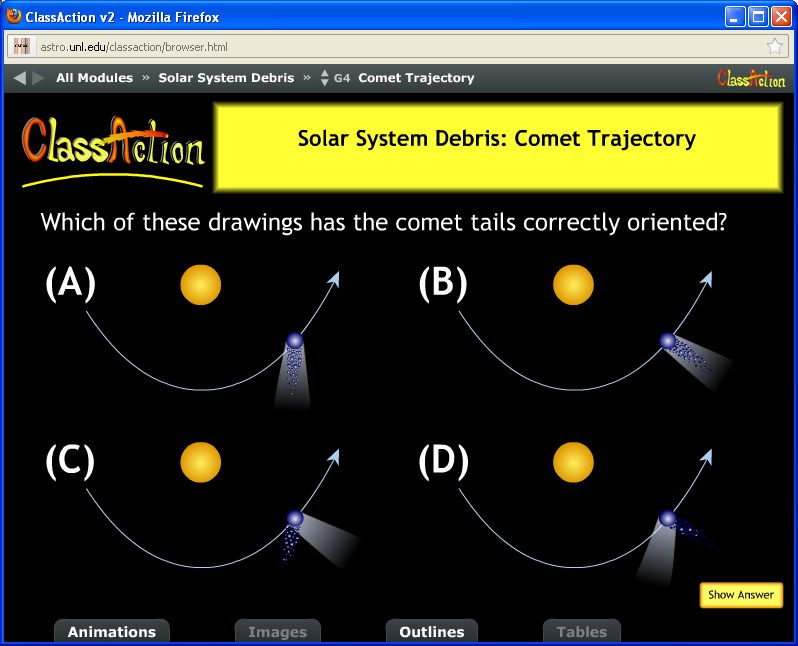 A concept question about the shape of a comet's tail from the ClassAction collection at the University of Nebraska - Lincoln. The correct answer is C, by the way.

Both of these questions are highly-susceptible to success-by-recognition where the student doesn’t really know the answer until s/he recognizes it in the options. “What do comets’ tails do again? Oh right, they point away from the Sun.”

Instead, we decided on a question that better assessed their grasp of how comet tails behave. The cost is, this question is more difficult to mark:

Oh, the question was marked out of 2, 1 pt for each tail pointing away from the Sun. That’s not the kind of assessment I mean, though. I’m talking about the assessment that goes into evidence-based teaching and learning. How did the students respond to this question? What it a good test of their understanding?

I went through the stack of N=63 exams and sorted them into categories. It wasn’t hard to come up with those categories, it was pretty obvious after the first 10 papers.

It’s clear that the vast majority of students grasp the concept that a comet’s tail points away from the Sun. Terrific!

So why are we wasting this question on such an obvious bit information, then? Let me put that another way:  These students are evidently, and I mean evidently, capable of learning more about comets. We thought this <ghost> “Oooooo, watch oouuttt! Comet tails point awaaaaayyyy from the Suuuun…” </ghost> concept would be difficult enough. Nope, yhey surprised us. So let’s crank it up next year. Let’s explore the difference between the ion and dust tails. And that the length of the tail changes as the comet approaches and recedes from the Sun. Next year, the answer that gets full marks will be the one with

That’s evidence-based teaching and learning. Find out what they know and then react by building on it and leveraging it to explore the concept deeper (or shallower, depending on the evidence.) It’s not difficult. It doesn’t require poring over Tables of Contents, even in the excellent Astronomy Education Review. All it requires is small amount of data collection, analysis and ability to use the information. Hey, those are all qualities of a good scientist, aren’t they?

Find me on Twitter @polarisdotca
View all posts by Peter Newbury →
This entry was posted in astro 101, peer instruction, teaching and tagged astronomy, comet, CWSEI, evidence-based, research. Bookmark the permalink.

1 Response to A Tale of Two Comets: Evidence-Based Teaching in Action