I wrote the worksheet as a ranking task (“Rank the 3 models by expansion rate 1 billion years ago” and so on) using the great collection at UNL as a template. There’s also a nice graph that helps summarize the current, past and future expansion of the 3 models. This is the graph for my analogy of 3 runners, Connie (who runs at a constant rate), Alice (who accelerates) and Deena (who decelerates) practicing for a 100-metre race. The Universe version is identical except “distance” is “size of the Universe” and “cross finish line” is “now”.) 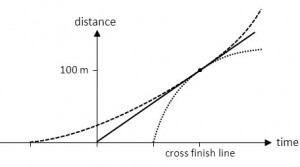 Three runners cross the finish line at the same time and going the same speed. When did they start running?

I agonized (well, that’s a bit strong but you know what I mean) over getting the students to draw the 3 curves for the uniform, accelerating and decelerating Universes or getting them to identify and label the curves given in a diagram. Fortunately, we have nice set of learning goals for the course and one says, “You will be able to sketch different scenarios for the evolution of the size of the Universe, including when the Big Bang happened and the fate of the Universe.” That clearly told me to use “Sketch…” instead of “Label…”

Great. But is “sketch” the right verb? Soon, as a colleague and I started listing all the graphing nouns and verbs we use interchangeably, I realized once again that students most likely have many interpretations of these words. My “expert” interpretation is different than their “novice” interpretation of words like

It’s not inconceivable that a student could be asked to “graph the graph on the graph” or “plot the plot on the plot”. Ay caramba!

In the end, I asked the students first to “write labels Connie, Alice and Deena next to each runner’s curve in the graph” (the one above). I figured that showed them the critical feature of the story, that all three runners crossed the line at the same time and going the same speed. Then later I asked 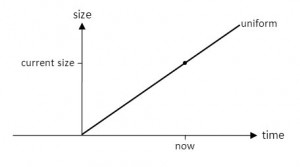 If the Universe expands at a uniform rate, right now is had its current size.

The students spent about 15 minutes on the worksheet. I’m happy to report that 103 of 115 (or 90%) of the students correctly chose C) older on this post-activity clicker question

Find me on Twitter @polarisdotca
View all posts by Peter Newbury →
This entry was posted in astro 101, clickers, interpreting graphs and tagged astronomy, education, graphs. Bookmark the permalink.