Time zones are much older than you think

Skype, facetime and a growing collection of virtual meeting tools like Blackboard Collaborate are making communication easier, cheaper and “almost like being there” with family, friends and colleagues around the World. Scheduling these conversations makes us acutely aware of the different time zones we live in. “PST”, “EDT”, “UT” are all becoming familiar parts of speech. If you think these time zones originated with the railroads of the British Empire, you’re half right. It was an Empire but not British. Try Roman.

Time zones, recall, divide the Earth in 24 strips, each 15 degrees of longitude wide, with local variations which follow political boundaries between countries. Everyone living within a particular strip sets their clocks to their strip’s specified time. The 24 strips, each differing by 1 hour, stay synchronized with the Sun: the Sun passes over the center of each strip (the prime meridian) at 12 noon every day (except when Daylight Saving Time is activated – then “solar noon” occurs at 1 pm local time.)

The origin of the time zones is typically traced to British railroad time around 1847. It was difficult to coordinate the train schedule when each city or town along the railway followed their own, local time. A hypothetical train speeding eastward along the Equator at about 1700 km/h could keep up with the rotation of the Earth and it could pass through every station at 12 noon. Just imagine the confusion: 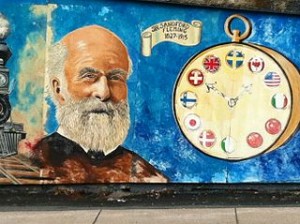 The traditional story continues with Sandford Fleming leading the establishment of World-wide time zones in 1879. This, and a long list of accomplishments, led to his knighthood in 1897.

This traditional account of the origin of the time zones omits their true origin, nearly 2000 years earlier during the time of the Roman Empire. 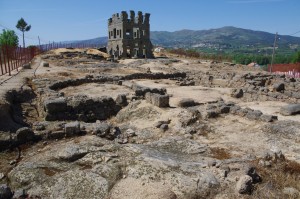 We’re all familiar with accounts of how the Romans used signal fires to communicate.  Roman soldiers manned chains or networks of towers similar to this one at Castelo Belmonte, covering and uncovering the signal fire in a code that relayed information from one tower to the next. However, as pointed out by P. Southern in Signals versus Illumination on Roman Frontiers (1990), the English translation for these towers is “watchtower” or “signal tower”, not “fire tower.” Furthermore, this method of communication was hindered by poor weather. In looking for alternative forms of communication, G.H. Donaldson, in Signaling Communications and the Roman Imperial Army (1988) reports the existence of acoustical horns on some signal towers in Germany. 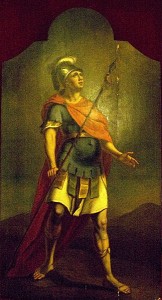 In fact, these mouthpieces were used by the Roman clamantia to verbally relay messages from location to location. One by one along the line, soldiers listen for the call from their neighbor and then call out that message in the direction of the next soldier. Though this requires soldiers, more to be more closely space than the watchtowers, this system of communication does not require line-of-sight, works in both the day and night, and still functions in rain and fog. A well-trained team of clamantia could relay messages at nearly the speed of sound.

Soldiers stationed on signal chains running primarily east-west were also tasked with relaying the time of day. Starting at noon on the most eastern end of the chain, one by one, westward along the line, soldiers cried out, “Meridiem!” or “Noon!”. This system of time-keeping proved to be remarkably accurate Italy, the heart of the Roman Empire. 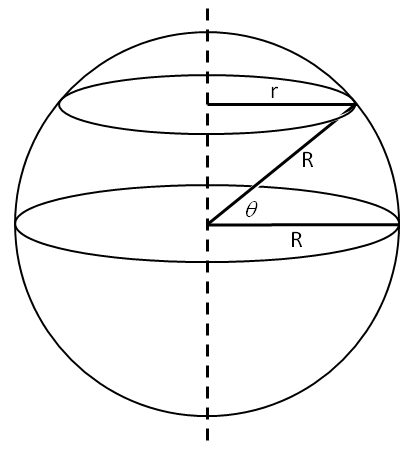 The parallel of latitude at latitude θ has radius r = R cos θ (Diagram by me, CC)

almost exactly tracking the daily motion of the Sun.  The establishment of “prime” clamantia every 1225 km along the east-west chains creates a sequence of time zones, each one hour wide.

As the Roman Empire fell, so did this system of time-keeping, only to be revived 2000 years later when, once again, society found it necessary to keep track of time beyond the outskirts of each village, town and city. And next time, don’t fool yourself with that modern tale of railroads and Sandford Fleming.

Find me on Twitter @polarisdotca
View all posts by Peter Newbury →
This entry was posted in communicating science and tagged astronomy, history, Roman. Bookmark the permalink.

2 Responses to Time zones are much older than you think