“Books were always being written differently from how one spoke” muses the narrator of Manlio Argueta’s Un día en la vida/One Day of Life (110/141). But not this one, perhaps. It’s a novel based on interviews with Salvadoran peasants and it abounds with the country’s typical linguistic forms, such as the use of “vos.” It also features characteristic words and expressions that include “cipote” for kid, “chucho” for dog, “chele” for blond or light-skinned, not to mention a whole range of terms for the flora and fauna of the countryside. Indeed, in interview, Argueta responds to a question about his “particular use of Salvadoran vernacular” with the comment that “it is a way of promoting the oral language as our own wealth [. . .]. I do this to reaffirm our own values, local values, so as to know that we exist.” Just as the book’s title asserts the particular within the general, the specific day within a much broader life, so the book’s language is unapologetically local, tied to a place that is not simply El Salvador as a whole but more specifically still rural El Salvador, here the department of Chalatenango in the country’s north, near the Honduran border.

To reproduce the forms of speech of the rural poor is also unmistakably a political choice, not least at the point at which the book was published, in 1980. It’s not simply (indeed, hardly at all) a matter of cultural nationalism. Rather it is one of the country’s most distinguished writers and intellectuals (he is now head of the National Library) affirming the vitality and expressive capacity of a whole social stratum that had been marginalized and oppressed, abused to the point of either breaking or exploding. For this is also a novel that comes from a very particular point in time: just before the formation of the FMLN, an alliance of various armed groups, and the outbreak of revolutionary insurrection. In the decade or more or civil war that would follow, up until the peace accords of 1992, Chalatenango would forever be one of the areas where the guerrilla had most support and freedom of maneuver. It was a “liberated zone” almost from the start, ideal terrain for guerrilla warfare. To some extent, this book is Argueta’s contribution to the combat.

This novel anticipates the war to come. As Gareth Williams notes, it is “the narrativization of an impending insurrection whose violence is arranged around collective martyrdom, sacrifice, and rapture as will-to-power” (The Other Side of the Popular 192). We hear the age-old history of the abuses that the peasants receive from the landlords and their hired men, not to mention the myriad other “authorities” with their posturing machismo and absolute disdain. We see, moreover, a gradual escalation of violence: the peasants are slowly gaining consciousness (“conciencia”) of their exploitation and refusing to dismiss it as one of life’s many sufferings; they are beginning to agitate and organize in more formal ways to claim their “rights,” encouraged by a new set of priests inspired by liberation theology. In response, the authorities respond ever more brutally, trying (at times quite literally) to dismember the body of the campesinado and stick it in the ass to the priests.

The crunch comes when the novel’s protagonist and dominant voice, Lupe, is faced with the mangled remains of her husband, Chepe, more dead than alive, who is dragged to her door for her to confirm his identity. Seeking to protect herself, her family, and her neighbours, as well as in honour of a pledge she has made to Chepe in the past, she constrains her emotions and denies that she knows him. What follows is her grand-daughter’s vision of a grotesque counter-violence, of the corpse of one of the soldiers who has been tormenting them: “His eyes and his mouth were open, and no matter how much they tried to shut his eyelids they would open again, and no matter how much they pulled on his big toes, his mouth would not close” (166/215). Lupe fears that this is a nightmare, but her grand-daughter articulates the logic of the novel when she tells us that it is anything but. 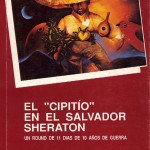