Ken Bain has given me some good food-for-thought. He first did this in a book published in 2004, and then more recently, in a tweet. Oddly enough, this began with a gift bag.

When I started my postdoctoral teaching fellowship at Middlebury College in 2015, I (and the whole cohort of new faculty) received a gift bag. I remember (and still have) just two of the items: a Middlebury mug and a copy of Ken Bain’s What the Best College Teachers Do. 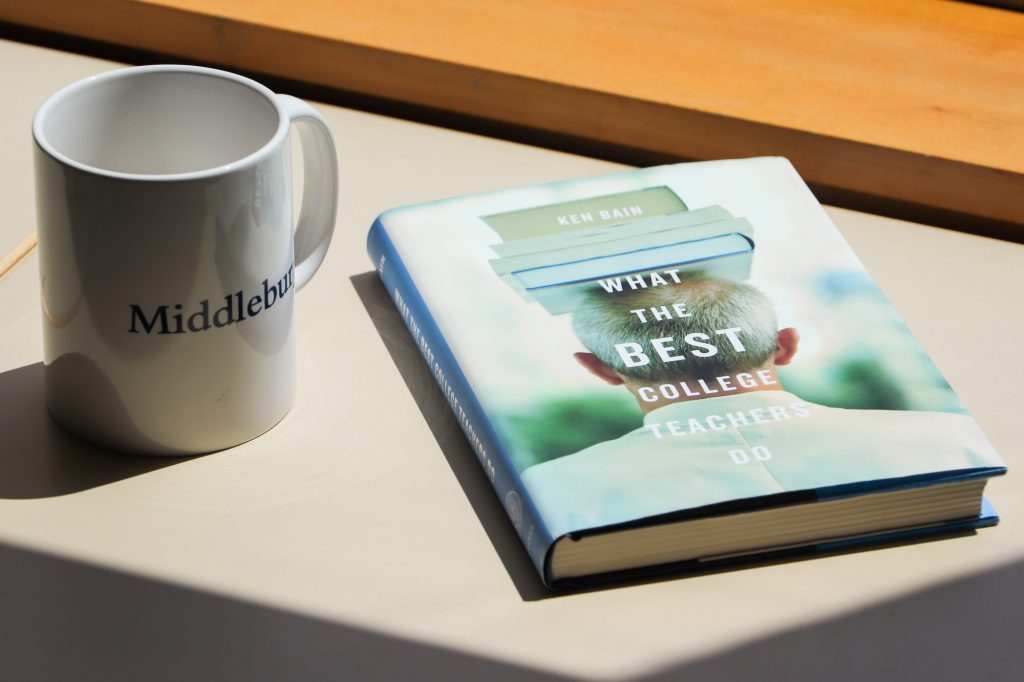 As a dad of young children, my time for reading is limited, so I’m embarrassed to admit that it took four years for me to read the book. It’s great, and I highly recommend it. Much of the book aligned with my existing knowledge and views of teaching and learning, but two things surprised me. The first is that I should always use the microphone. The second started on page 153:

“The widely used practice of counting off for late papers offers some illustration of the performance-based approach [in contrast to a learning-centered approach to teaching]. It’s easy to see that such a policy might have emerged because some instructors thought students should learn to meet a deadline. In other cases, it may have arisen in cases where students depended on each other’s work in a community of learners. Yet it persists in disciplines in which scholars do not always face a deadline for their own work, and in classes in which students do not read one another’s papers. It is often scored in a rigorous and precise fashion, as if such numbers can really capture the degree to which students have internalized a sense of timeliness. The numbers themselves often suggest that the ability to be timely counts as much as – or sometimes even more than – the capacity to do the discipline. Most professors who have such policies don’t claim that the ability to meet a deadline is a learning objective or try to create the kind of community of learners . . . . They simply count off because they don’t like late papers. . . . Even those who cite such a policy [a learning objective of timeliness] can seldom if ever point to any evidence that it actually encourages students to be timely or that such habits are likely to stick beyond the confines of the classroom. Thus in many classes, the late-paper policy no longer has any learning base, only a performance one.” (Baine 2004, pp. 153-154)

This made my head explode. When I was a student, it was standard that late work would be penalized. When I read this, I had just finished teaching a course where the students submitted frequent writing assignments, and I imposed late penalties. Part of this was logistics. The TAs and I quickly returned comments and feedback, as many of the assignments immediately built upon one another, and students were also engaged in peer review. If I think critically and honestly though, the main reason for the penalty is that it inconveniences me when students hand in late papers. I can relate to the hope that these penalties teach students how to budget time wisely. However, my personal experience supports the opposite conclusion, as many years of deadlines as a student utterly failed to impede my strong tendencies toward procrastination.

So, what on Earth to do?

I would be thrilled if all students handed everything in on time. However, I’d rather a student hand in something good a day or two late than submit substandard work on time. I’m intrigued by suspending late penalties all together, but I have a difficult time imagining how this would function. I’m aware that some faculty give students a fixed number of ‘tokens’ over the semester that can be redeemed for 1-day extensions on deadlines. This is appealing to me, but it still falls within the penalty framework. After I tweeted a bit on this topic, Ken Bain himself gave me the best insight:

How can U help them understand that U cannot give them ‘more time’. U can only allow them to take more time away from rest of their lives. They must measure the result. They take control of own time & education. https://t.co/OkLfIWuBtg

That is the real question. How can I teach students to effectively manage themselves? I honestly don’t know the answer. In my own life, I struggle to work efficiently and punctually, even though I’m well aware that I cannot create time. Though I’m unsure of its answer, I’m going to use Ken Bain’s question as the basis of my practice regarding a submission policy.

A colleague of mine whom I greatly respect, Navin Ramankutty, told me that in one of his courses, he lets the students decide the late policy. It has ranged from a strict ban on late submissions all the way to a no-deadline policy. (Though he tells the students the downside of no deadlines is that it will take them a very long time to get feedback). I think I’m going to defer to my students, in hopes that this discussion will motivate careful thought about how they spend their time. In the first or second lecture, I will do take 15-20 minutes to do the following:

I don’t know if this will truly help my students understand that I ‘cannot give more time’, but I hope it will move them (and me) in that direction.