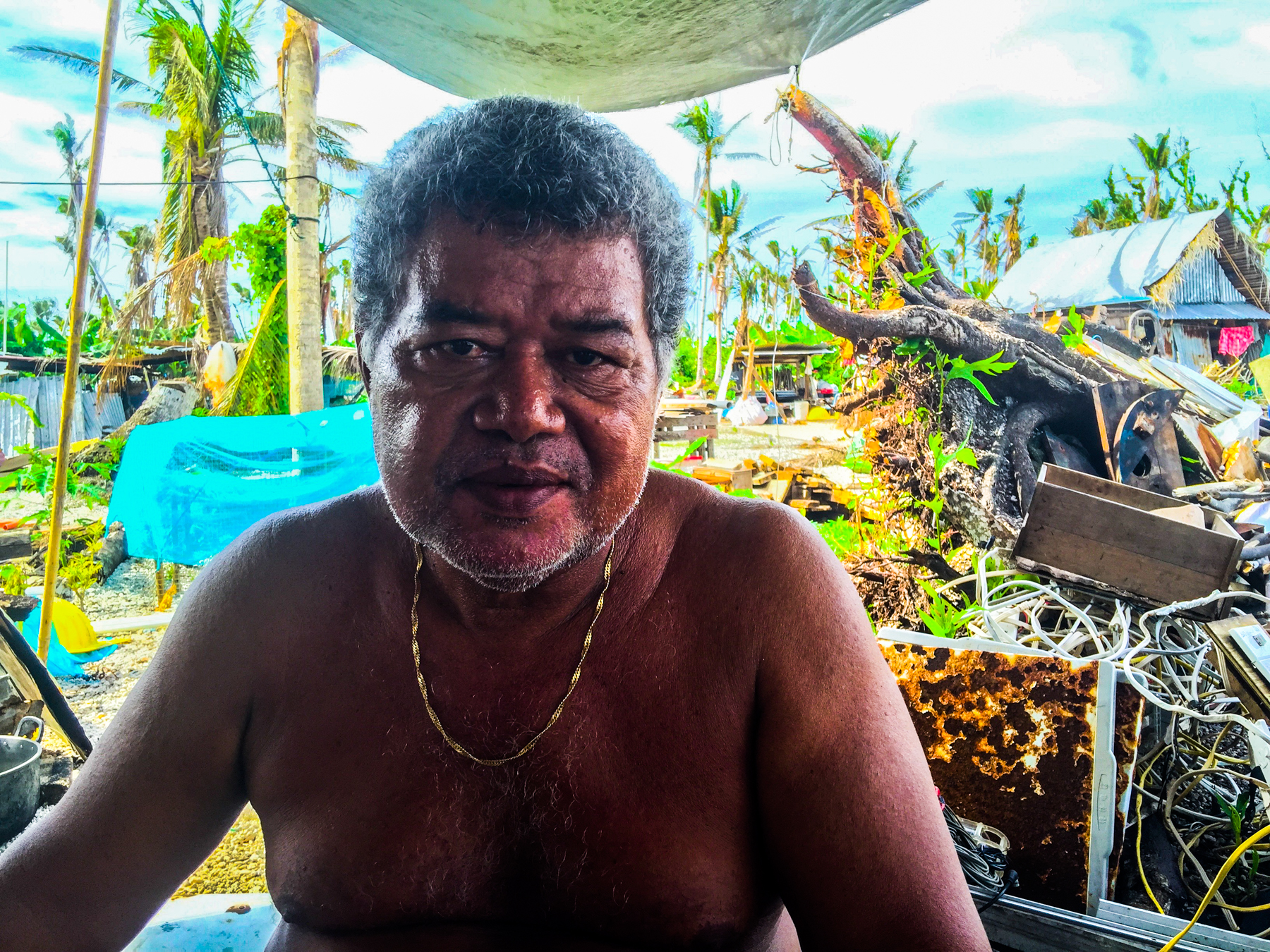 Ignathio is a community leader who was born on Mogmog and has lived there his entire life. Even though it has been two months since the typhoon hit, the debris around his house evidences how much there is still to be done.

During the typhoon, I went with my brother-in-law and family to stay in the church. There were nine people in the church. The roof came off and I saw that the electricity had not been turned off and broken cables flying around. I tried to close the door but couldn’t.

I saw my sister-in-law. She was standing right next to me. She got picked up in the air and dropped again by a small tornado. [He gestured to show that she had only gone a few feet.] He said, “I thought she was going to die, but it dropped her again.”

During Ophelia [a category 4 typhoon that hit Ulithi on November 30, 1960], it was calm in the eye. This time it was different because we were only in the side of the eye. I took my family from the church to a concrete house at 8 p.m. The store and the houses were gone, but my pigs were still there. After the eye passed, the wind changed direction. It was coming from the north but after the eye it started coming from the south. I told people to go inside because the storm was coming again.

You can see the mark of the tin roofs on the trees. I couldn’t see the wind, but you can see the paths of small tornadoes in the broken trees.

[The next morning] I was surprised — I thought we would die. My home was saved by a fallen tree. It prevented the house from blowing away.

The wind slowly got weaker but things were still flying around. Someone was hit by a tin roof in the back of the head and he fell into a post, but it was minor and he is okay. It was lucky. Someone was cut when a window shattered. That’s it. Everyone was inside.

Right after we woke up, we salvaged what we could and met in front of the church. Everyone brought all the food, water, and coconuts they could find to divide among each family. When disasters happen, people share. People from Mogmog went to visit other islands to help them. Falalop sent us food. The taro was uprooted in Falalop, so they sent some here.

It took 2-3 days for PMA to send food. It took a week for Mark from USAID to come.

The 1st and 2nd days, we kept working. On the fifth day, we sent the boat to go and do bottom fishing. We still kept the closed fishing area shut after the typhoon. We didn’t open them after the storm.

I think I’m having a typhoon tantrum — it’s making me crazy! [Places hands on head]