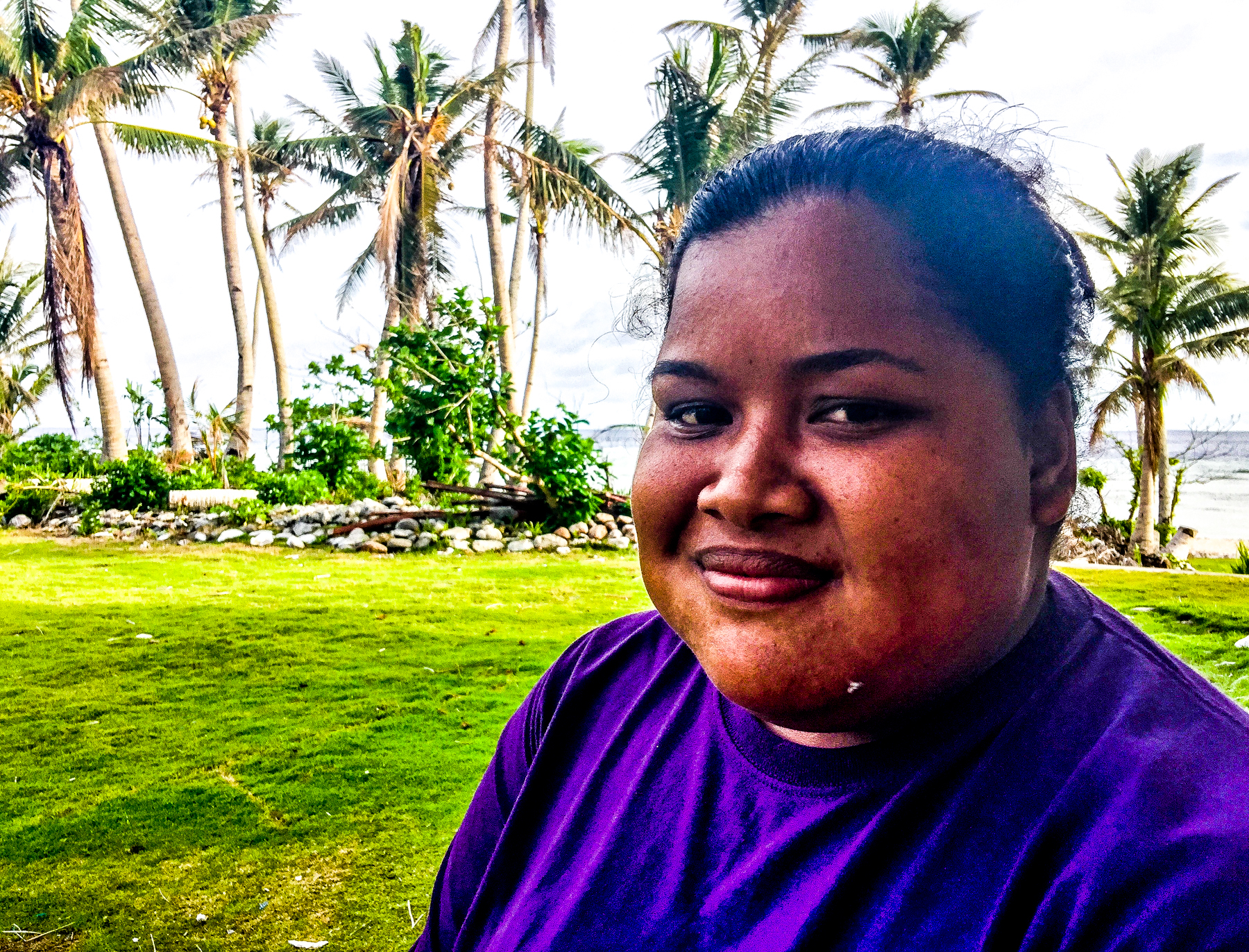 Sammi is a 29-year-old woman who lives in Falalop and works at the Ulithi Adventure Resort.

My home was built as a typhoon shelter. I had 15 people staying with me during the typhoon, they were all members of my family.

I heard about Typhoon Maysak two days before. To prepare, the men cut down trees to keep them from falling on homes. They had a meeting to announce that the typhoon was coming and ask the men to start cutting down trees. Only one tree fell on my home. The women cooked food and put the cooking stuff inside so it wouldn’t fly away.

We didn’t save any food or coconuts for later. We stayed in the house and outside because our bedroom is outside. We were with my brothers, my neice, my dad’s uncle, my dad’s sister, her father and two daughters, mom’s brother & wife & their two kids and grand-daughter, and her aunt, so fifteen of us all together.

When I first heard about the typhoon I didn’t believe it would come here. We had prepared for a lot of typhoons before and they didn’t come. I didn’t expect it to be like that, a very strong typhoon.

When the typhoon came there was the sound of the house shaking. My house has a hole in the wall so you can look outside, and we saw and heard lots of wind and rain.

I wasn’t scared. My house only has one room. When the typhoon got stronger, we moved everyone inside into the room. Water came in the other room so we could not lie down. We had to squeeze everyone in.

The storm started at 9 p.m. and lasted until 3 a.m. We fell asleep then. My parents told us to stay awake in case something happened and we needed to run. But we kept on praying.

I was shocked after the typhoon. All of the trees and houses were down. I was scared then. (Laughs) I didn’t know if we would have food and everything.

Some people didn’t take all of their stuff to the shelter, just things like a pillow and blanket. After the typhoon many people didn’t have anything to wear.

But we were lucky. We were not really scared compared to others.

Some of my family stayed at Junior’s house. Our house was better because his house had lots of boards that were gone.

Right after the storm, I went to check on my brothers and sisters at Junior’s house to see if it was safe or not. Then we went to find a place where we could cook food for everyone. We collected all the rice, bananas, and breadfruit and cooked it.

PMA [Pacific Missionary Aviation] came one day after the storm, they brought water. The women went to the taro patches. The taro was already pulled [from the storm], so we pulled everything and sent it to the different islands in Ulithi. Each clan/family has a taro patch. We went to every taro patch. The men took the taro to the men’s house to distribute it. We could not keep them because they would spoil.

We had enough water because some people saved.

Just the men went fishing after the typhoon. The beaches look very different. Only the rocks are showing now. You have to walk all the way out to fish or swim.

If there was another typhoon we would do things differently. Everyone prepared when we heard that Typhoon Dolphin was coming [after Maysak]. People were nervous. They get nervous when they see clouds [laughs]. They are scared of storms now.

The community is banding together, the young people too.